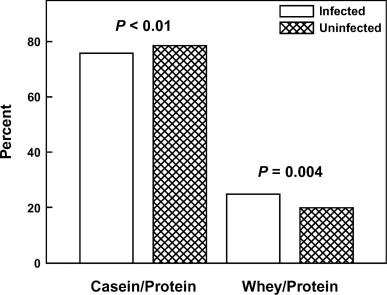 Changes in Milk Composition as Affected by Subclinical Mastitis in Sheep

Open ArchiveDOI:https://doi.org/10.3168/jds.S0022-0302(04)73140-9
Changes in Milk Composition as Affected by Subclinical Mastitis in Sheep
Previous ArticleIdentification of Corynebacterium bovis by Endonuclease Restriction Analysis of the 16S rRNA Gene Sequence
Next ArticleDifferences in Heat Tolerance Between Preimplantation Embryos from Brahman, Romosinuano, and Angus Breeds*

Udder infection in dairy sheep has major negative effects on both yield and quality of milk, and leads to greater economic losses than those reported for dairy cattle (
Watson and Buswell, 1984
Modern aspects of sheep mastitis.
Br. Vet. J. 1984; 140: 529-534
). In an earlier study on 1000 sheep from 20 Israeli dairy flocks, we found that the milk yield of the uninfected udder halves was significantly higher than that of the infected halves, whereas fat and total protein contents were lower in the uninfected halves than in the infected ones (
Leitner et al., 2003a
Udder infection and milk somatic cell count, NAGase activity and milk composition−fat, protein and lactose−in Israeli Assaf and Awassi sheep.
Small Rumin. Res. 2003; 49: 157-164
). However, a direct comparison between infected and uninfected glands was not possible in that study because the measurements were done on the animal level and not on the single-gland level. Also, in that study, we measured only total protein content. That information was insufficient in the case of dairy sheep because almost all of the milk was processed into cheese; thus, any change in total casein concentration would have a disproportionate effect on the industrial value of the milk.
The present study focused on gaining better insight into how subclinical mastitis on the glandular level in dairy sheep affects milk yield and the milk composition as expressed in curd yield (Yc). In order to achieve this goal, we chose animals in which one udder half was infected with identified CNS species and the contralateral gland was free of bacteria. In each gland, we analyzed inflammation indices, total milk protein subdivided into CN and whey protein, plasmin (PL) activity, and measures of proteolysis. The PL system was analyzed because PL is the main proteolytic enzyme in milk and because PL was found to be associated with enhanced CN degradation in subclinically mastitic dairy cows. Plasmin is found in milk mostly as the inactive zymogen plasminogen (PLG), which is activated by plasminogen activators (PA) (
Politis, 1996
Plasminogen activator system: Implication for mammary cell growth and involution.
J. Dairy Sci. 1996; 79: 1097-1107
).

Thirty-six Israeli-Assaf dairy sheep with one udder half infected with a single species of CNS and the contralateral gland bacteria-free were selected from 2 flocks. Milk samples from each udder half were tested for bacterial infection, SCC and N-acetyl-β-d-glucosaminidase (NAGase) activity, in 3 consecutive weekly examinations. The sheep were selected 40 to 120 d after lambing and their daily milk yield exceeded 1.5 L. In both farms, the sheep were milked twice daily at 0400 and 1400 h, with teat postdipping only. Animals were kept in an open shelter that provided 4 m2 of shaded slatted floor and 4 m2 of concrete-surfaced yard for each sheep. Food was offered in mangers located in the sheds.

Milk yield was measured and sampling procedures were carried out during the morning milking. Milking was by hand and the yield was determined by weighing the milk of each udder half of each sheep individually. For the bacteriological tests, NAGase activity measurement and SCC determination with a Coulter counter model Z1 (Coulter Electronics Ltd., Beds, UK), the udder halves were cleaned, disinfected, sampled, and analyzed as described by
Leitner et al., 2003a
Udder infection and milk somatic cell count, NAGase activity and milk composition−fat, protein and lactose−in Israeli Assaf and Awassi sheep.
Small Rumin. Res. 2003; 49: 157-164
. Three additional sets of samples were taken from each udder half and distributed for analysis as follows: one set was preserved with Broad Spectrum Microtabs II (D & F Control Systems, Inc., Dublin, CA) and was sent to the Israel Cattle Breeders Association Central Laboratory (Caesarea, Israel) for analysis of milk gross composition (protein, fat, and lactose) with the Milkoscan 6000, and of SCC with a Fossomatic 360 (Foss Electric, Hillerϕd, Denmark). The second set was defatted, and the skim milk was subjected to analysis of the concentrations of casein, total whey protein, albumin, and proteose peptones (p-p), as described by
Shamay et al., 2000
Effect of dexamethasone on milk yield and composition in dairy cows.
Ann. Zootech. 2000; 49: 343-352
,
Shamay et al., 2003
Infusion of casein hydrolyzates into the mammary gland disrupt tight junction integrity and induce involution in cows.
J. Dairy Sci. 2003; 86: 1250-1258
, and measurement of the activities of PA, PLG, and PL, according to
Silanikove et al., 2000
Stress down regulates milk yield in cows by plasmin induced β-casein product that blocks K+ channels on the apical membranes.
Life Sci. 2000; 67: 2201-2212
. In these samples, within 5 h after sampling, the concentrations of free (ionized) calcium ([Ca2+]) was determined by the repeated addition procedure and the calcium activity (aCa2+) by the uncorrected procedure, with a calcium-specific electrode (
Silanikove et al., 2003
Use of an ion-selective electrode to determine free Ca ion concentration in the milk of various mammals.
J. Dairy Res. 2003; 70: 241-243
). The third set of samples was used to determine the percentage of curd and Yc, calculated as the percentage of curd multiplied by milk yield. Clotting time (Tc) was performed according to
Berridge, 1952
Some observations on the determination of the activity of rennet.
Analyst. 1952; 77: 57-62
. The curd percentage was determined by a modification of the method described by
Calvo and Balcones, 1998
Influence of heat treatment on rennet clotting properties of mixtures of cow's, ewe's, and goat's milk and on cheese yield.
J. Agric. Food Chem. 1998; 46: 2957-2962
, with Fromase 15 TL (Gist-Brocades nv, Delft, The Netherlands) used as the coagulating enzyme. The modifications included using 5 mL of the fresh milk, the addition of lactic acid to imitate the culture growth, and weighing the pellet after centrifugation at 1650 × g.

Bacteriological analysis was performed according to accepted standards (
Hogan et al., 1999
Laboratory Handbook on Bovine Mastitis.
National Mastitis Council, Inc., Madison, WI1999
). From every milk sample, 0.01-mL subsamples were spread onto blood-agar plates (Bacto-Agar; Difco Laboratory, Detroit, MI) containing 5% of washed sheep red blood cells, and onto MacConkey plates. All plates were incubated at 37°C and examined for growth after 18 and 42 h. Colonies suspected to be staphylococci were tested for coagulase (tube test) (Anilab, Rehovot, Israel). Strain identification was carried out with the API STAPH-IDENT, 32 Staph kit (bioMerieux S.A., Marcy-l’Etoile, France). When the percentage of micrococci-like bacteria that matched the test strain exceeded 90%, the strain was regarded as specific. If the percentage fell below 90%, the strain was recorded as unidentified CNS.

Data were analyzed with the SAS Software Release 8.2 (SAS Inst., Inc., Cray, NC) with the Proc GLM and Proc CORR procedures. Dependent variables were SCC and Log SCC (Coulter counter), SCC and Log SCC (Fossomatic 360), NAGase, milk, fat, protein, lactose, CN, whey proteins, albumin, p-p, Ca, PA, PLG, PL, curd, Tc, and the calculated values of CN:protein, whey proteins:protein, and PLG:PL ratios and Yc. The independent variables—bacteriological status and sheep—were examined according to the model:
where Yij = dependent variable, u = overall mean, Bj = bacteriological status, i = 1 (infected) or 2 (uninfected), Si − sheep, j = 1…36, eij − error term.
No significant difference in the significance level was found between the results of the analyses based on SCC and those based on log SCC; therefore, the results presented are those based on the arithmetic SCC.

Calcium Activity (aCa2+) as a Measure of Casein Degradation

The aCa2+ was negatively related to measures of proteolysis (p-p, p-p:CN). The activity of ions in solution is affected by the presence of a chelator in that solution.
Silanikove et al., 2003
Use of an ion-selective electrode to determine free Ca ion concentration in the milk of various mammals.
J. Dairy Res. 2003; 70: 241-243
demonstrated a negative linear relationship between CN concentrations in the milk of humans, goats, cows, sheep, and mice on the one hand, and aCa2+, a finding that is consistent with the fact that CN are powerful Ca chelators. The association between CN degradation and reduction in aCa2+ may be accounted for by the exposure of phosphoserine groups that are hidden within the casein micelles, because these molecules are responsible for the Ca-chelating properties of CN. Casein degradation occurs in the gland during the intervals between milkings (
Le Roux et al., 1995
Proteolysis in samples of quarter milk with varying somatic cell counts: 1. Comparison of some indicators of endogenous proteolysis in milk.
J. Dairy Sci. 1995; 78: 1289-1297
;
Urech et al., 1999
Changes in milk protein fraction as affected by subclinical mastitis.
J. Dairy Sci. 1999; 82: 2402-2411
). Thus, the differences in aCa2+ between the infected and uninfected glands represent the additional CN degradation in the infected glands. Because the measurement of aCa2+ is rapid and cheap, it appears to be promising as a valuable tool to monitor the extent of CN degradation under various conditions.

The conversion of casein to whey components (p-p) by PL accounts for the reduction in curd yield. In addition, a positive significant correlation was observed between both PL and PA activities on the one hand, and rennet clotting time on the other hand, which is consistent with similar interactions found in late-lactating goats (
Fantuz et al., 2001
Plasminogen activation system in goat milk and its relation with composition and coagulation properties.
J. Dairy Sci. 2001; 84: 1786-1790
).
Curd yield was lower in the infected halves than in the uninfected ones. This phenomenon is directly related to the finding of lower casein content and higher p-p content in the milk, the latter being an indicator of casein breakdown. These findings reveal the losses that are not indicated by measurements of milk yield, and emphasize the severity of the effects of subclinical mastitis on cheese production through its effect on Yc. In addition to the direct loss of curd, in terms of volume, as presented above, Tc provides indirect evidence of poor milk quality since it is common to determine milk-clotting activity according to the rapidity with which the enzyme clots milk under a set of specified conditions. Moreover, the secondary, nonenzymatic phase of the aggregation of the casein micelles, which follows the first enzymatic phase, is particularly susceptible to variations in milk composition and to the presence of added salts (
Ernstrom and Wong, 1974
Milk clotting enzymes and cheese chemistry.
in: Webb H.B. Johnson A.H. Alford J.A. Fundamentals of Dairy Chemistry. Avi Publ. Co., Inc., Westport, CT1974: 662-771
), and probably also to aCa2+. The latter is probably influenced by the compositional changes caused by the subclinical infection, as manifested in aCa2+ and calcium concentration. The observed reduction in aCa2+ suggests that Ca ions were less available to induce their procoagulating effect on para-κ-CN, most likely because of their close association with phosphorylated p-p. Thus, high PL activity in mastitic sheep negatively affects curd yield, both directly and indirectly, through its effect on the coagulation properties of the milk, most probably via the degradation of CN and the consequent modifications of aCa2+.

Interrelationships Between Milk Yield and Composition in Subclinically Mastitic Sheep

This work was partially supported by The Israeli Sheep Breeders’ Association . The technical assistance of S. Bernstein, A. Glickman, and M. Winkler is highly appreciated.