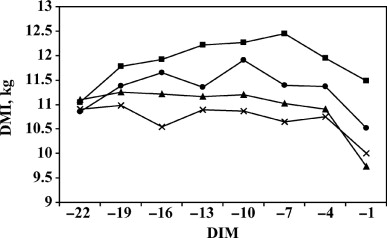 Continuous variables (intake, milk production, and plasma metabolites) were analyzed as repeated measurements using PROC MIXED of SAS (version 8.1,
SAS Institute, 2000
SAS Institute
SAS User's Guide. Statistics Version 8.0 Edition.
SAS Inst. Inc., Cary, NC2000
). The interactions of treatment × parity, treatment × DIM, parity × DIM, and treatment × parity × DIM were tested for each dependent variable. No treatment × parity, parity × DIM, and treatment × parity × DIM interactions were significant and were therefore excluded from the model.
The model used was
where μ is the overall mean; Ti is the treatment effect (where i is 1 to 4); Lj is parity (where j is 2 or >2; C(T × L)ijk is cowk nested in treatmenti and cow nested in parityj; DIMijkl is DIM as a continuous variable; and Eijklm is the random residual. Least squares means and adjusted SEM are presented in the tables; P < 0.05 was accepted as significant unless otherwise stated.

Prepartum DMI results are presented in Table 3 and in Figure 1. Feeding both fat supplements prepartum decreased the intake, and the daily average DMI in the PrFA and CaLFA groups were decreased by 6.7 and 15.7%, respectively, as compared with the control group (P < 0.01). No treatment × DIM effect was observed for prepartum intake. The daily average NEL intake prepartum was higher in the control and PGLY groups than in the PrFA and CaLFA groups. Daily average DMI and NEL intakes prepartum in the PrFA group were higher than in the CaLFA group (P < 0.006). The daily average DMI from calving until 100 DIM in the PGLY group was similar to that in the PrFA group and was higher than those in the control and CaLFA groups (Table 3 and Figure 2; P < 0.05). The treatment × DIM effect through 100 DIM was significant (P < 0.0001). Analysis of the DMI for 50 DIM showed higher intakes in all groups compared with that in the CaLFA group (P < 0.03). The daily average NEL intake postpartum in the PrFA group was 3.1% higher than that in the CaLFA group (P < 0.03).
Table 3Least squares means of DMI and NEL intake pre- and postpartum, and production and efficiencies until 100 DIM
a–c Means within a row with different subscripts differ (P < 0.05).
1 Treatments: cows were fed from 256 d of pregnancy either a dry cow ration and postpartum fed a lactating cow diet; 500 g/d per cow of dry propylene glycol (ProGlyc 55, Kimtec, Heijningen, the Netherlands) through 21 DIM (PGLY); 230 g/d per cow of Energy Booster 100 (Milk Specialties, Dundee, IL) through 100 DIM (PrFA); or 215 g/d per cow of Megalac-R (Church & Dwight, Princeton, NJ) through 100 DIM (CaLFA).
As can be seen in Table 3, cows in both fat-supplemented groups (PrFA and CaLFA) produced 4.5% more milk than did cows in the control and PGLY groups (P < 0.02), whereas no differences were observed between the control and PGLY groups. No differences in fat percentage or yield were observed among groups. The protein percentage in the PrFA and CaLFA groups was lower than that in the control group (P < 0.05), with no differences in protein yield among groups. No differences were observed among groups in FCM 3.5% yields. Efficiency calculations are presented in Table 3. The gross efficiency of FCM (3.5%) from DM was higher in the CaLFA group than in the control and PGLY groups (P < 0.02), whereas the efficiencies of FCM (3.5%) and total energy produced in milk from NEL intake were not different among groups.

An increase of 25 kg of BW was observed from 28 to 1 d before parturition in all groups. This could partly be attributable to conceptus growth during the closeup dry period, which was estimated as 35 to 40 kg during the whole dry period (
National Research Council, 2001
National Research Council
Nutrient Requirements of Dairy Cattle.
7th rev. ed. Natl. Acad. Sci., Washington, DC2001
). An increase of 0.25 units of BCS was observed, which also reflected tissue accumulation, with no differences among groups.
Douglas et al., 2004
Peripartal metabolism and production of Holstein cows fed diets supplemented with fat during the dry period.
J. Dairy Sci. 2004; 87: 4210-4220
,
Douglas et al., 2006
Prepartal plane of nutrition, regardless of dietary energy source, affects periparturient metabolism and dry matter intake in Holstein cows.
J. Dairy Sci. 2006; 89: 2141-2157
reported a decrease in BCS as calving approached that was concomitant with a decrease in DMI. In the current study, the rate of decreasing DMI was moderate, and this might be the reason for gaining BW and BCS during late pregnancy in all groups.

Supplementing the diets of dairy cows with CaLFA or PrFA starting at the close-up dry period through 100 DIM decreased prepartum feed intake, increased plasma NEFA concentrations prepartum, increased BHBA pre- and postpartum, and decreased plasma insulin concentrations compared with cows fed a control diet or a diet supplemented with dry PGLY. Differences in the response to rumen-protected fat containing high (CaLFA) or low (PrFA) proportions of unsaturated FA were observed in peripartum DMI and plasma NEFA and insulin concentrations prepartum; the effects of CaLFA were most pronounced in increasing NEFA and depressing plasma insulin concentrations. Fat supplementation of the diets of dairy cows starting at the close-up dry period seems to have adverse effects on the metabolic status of the cows, which might increase the prevalence of metabolic disorders. However, peripartum fat supplementation was beneficial to the productivity and feed efficiency.

This research was supported by Research Grant No. US-3422-03 R from the United States-Israel Binational Agricultural Research and Development Fund (BARD). The authors gratefully acknowledge the kind donation of Megalac R by Church & Dwight (Princeton, NJ), and Energy Booster 100 by Milk Specialties (Dundee, IL). We also thank the experimental dairy farm team at the Volcani Center (Bet Dagan, Israel) for their assistance with animal care.