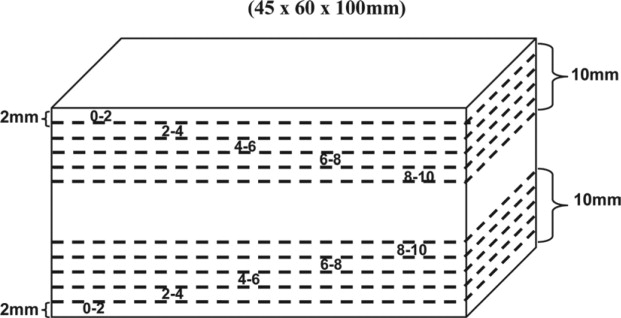 We have observed a high incidence of calcium lactate surface crystals on naturally smoked Cheddar cheese in the retail marketplace. The objective of this study was to identify chemical changes that may occur during natural smoking that render Cheddar cheese more susceptible to calcium lactate crystal formation. Nine random-weight (approximately 300 g) retail-packaged samples of smoked Cheddar cheese were obtained from a commercial manufacturer immediately after the samples were smoked for about 6 h at 20°C in a commercial smokehouse. Three similarly sized samples that originated from the same 19.1-kg block of cheese and that were not smoked were also obtained. Within 2 d after smoking, 3 smoked and 3 control (not smoked) samples were sectioned into 5 subsamples at different depths representing 0 to 2, 2 to 4, 4 to 6, 6 to 8, and 8 to 10 mm from the cheese surface. Six additional smoked cheese samples were similarly sectioned at 4 wk and again at 10 wk of storage at 5°C. Sample sections were analyzed for moisture, l(+) and d(−) lactate, pH, and water-soluble calcium. The effects of treatment (smoked, control), depth from cheese surface, and their interactions were analyzed by ANOVA according to a repeated measures design with 2 within-subject variables. Smoked samples contained signficantly lower moisture and lower pH, and higher total lactate-in-moisture (TLIM) and water-soluble calcium-in-moisture (WSCIM) than control cheeses. Smoked samples also contained significant gradients of moisture, pH, TLIM, and WSCIM, with lower moisture and pH, and higher TLIM and WSCIM, occurring at the cheese surface. Gradients of moisture were still present in smoked samples at 4 and 10 wk of storage. In contrast, the pH, TLIM, and WSCIM equilibrated and showed no gradients at 4 and 10 wk. The results indicate that calcium and lactate in the serum phase of the cheese were elevated because of smoking, especially at the cheese surface immediately after smoking treatment, which presumably predisposes the smoked cheeses to increased susceptibility to calcium lactate surface crystallization.

Cheese samples for this study were provided by a commercial manufacturer. Cheeses were produced by a milled curd procedure using an automated production line that included enclosed vats (22,727-kg capacity) for coagulating the milk and cooking the curd; an enclosed conveyor series for continuous dewheying, cheddaring, and milling; enclosed mechanical metering of dry salt and automated stirring of salted curd; and block-forming towers that produced 19.1-kg blocks. The blocks were vacuum-packaged and aged for 3 mo before being cut into retail-sized chunks for smoking. One 19.1-kg block was segregated for this study and cut into retail-sized samples (approximately 47 × 60 × 100 mm) weighing about 300 g each. Twelve samples were randomly chosen from this block, 9 of which were assigned to smoking treatment and 3 of which served as a control (not smoked). The 3 control samples were vacuum-packaged and stored at 4°C. The 9 samples that were assigned to smoking treatment were wrapped in an airtight plastic tote bag and transported to a commercial smokehouse. Upon arrival, the samples were removed from the tote bag and placed inside the smokehouse chamber, where they were exposed to natural vaporous smoke at 20°C for approximately 6 h. After smoking, the samples were vacuum packaged and transported with the control samples to the University of Vermont by overnight express mail in an insulated shipping container containing ice packs.
Upon receipt (2 d after smoking), 3 smoked and 3 control samples were analyzed for chemical composition. The remaining samples were stored at 5°C until analysis at 4 wk and 10 wk after smoking. In preparation for the analyses, each cheese sample was sliced into 5 sections that represented 5 different depths (0–2, 2–4, 4–6, 6–8, and 8–10 mm) from the 2 largest (∼60 × 100 mm) opposite surfaces, as illustrated in Figure 1. Sections were cut using a wire cutting device, and each pair of sections with comparable depth from the 2 opposite surfaces was combined and grated in a blender to give a composite sample for that depth. Thus, 5 composite samples were prepared that represented 5 different depths from the 2 largest cheese surfaces: 0 to 2, 2 to 4, 4 to 6, 6 to 8, and 8 to 10 mm. The composite samples from the 3 smoked and 3 control cheese samples were analyzed immediately (i.e., d 2 after smoking) in duplicate for moisture, pH, l(+) and d(−) lactate, total Ca, and water-soluble Ca (WSC). A second and third set of 3 smoked cheese samples were sectioned and analyzed similarly at 4 wk and 10 wk after smoking, respectively. Moisture content was determined by drying in a forced-draft oven (Thermo Electron, Model 130DM, Winchester, VA) at 100°C for 24 h. Water-soluble Ca was determined using the extraction method described by
Metzger et al., 2001
Effect of milk preacidification on low fat Mozzarella cheese: III. Post-melt chewiness and whiteness.
J. Dairy Sci. 2001; 84: 1357-1366
. Total Ca and Na in cheese samples and Ca in water-soluble extracts were determined by inductively coupled plasma atomic emission spectrometry. Salt (NaCl) was calculated by multiplying Na content by a factor of 2.54. Cheese pH was measured using a Beckman 50 pH/ISE Meter (Beckman Instruments Inc., Fullerton, CA) by direct immersion of a ROSS combination spear-tip pH electrode (Orion Research Inc., Beverly, MA) into a finely ground sample at ambient temperature. Determination of l(+), d(−), and total lactate was by a colorimetric method (test kit no. 11112821035; Boehringer Mannheim/R-Biopharm AG, Darmstadt, Germany). Lactose in control cheese samples was determined by a colorimetric method (test kit no. 10176 303035). Salt, l(+) and total lactate, and WSC contents were expressed as concentrations on a moisture basis and referred to as salt-in-moisture, l(+) lactate-in-moisture, total lactate-in-moisture, and WSC-in-moisture.
Compositional data obtained at 2 d after smoking were analyzed statistically using a repeated measures ANOVA with 2 within-subjects variables to determine the effects of smoking treatment, depth from the cheese surface, and the interaction effect of depth × treatment (SPSS version 15.0, Chicago, IL).