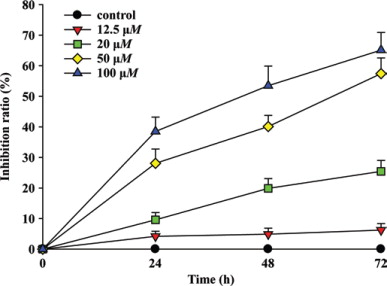 Open ArchiveDOI:https://doi.org/10.3168/jds.2009-2926
Apoptosis of stomach cancer cell SGC-7901 and regulation of Akt signaling way induced by bovine lactoferrin
Previous ArticleThe effect of ethanol and heat on the functional hydrophobicity of casein micelles
Next ArticleShort communication: Influence of pasteurization on the active compounds in medicinal plants to be used in dairy products

Lactoferrin, a protein from bovine milk belonging to the transferring family proteins, contains 2 bound Fe+3 ions. Recent research has revealed that lactoferrin exhibits not only antimicrobial activity by its high affinity for Fe+3 but also remarkable anticancer capacity in cancer cell lines. Meanwhile, increasing evidence suggests that aberrant activation of Akt is involved in both normal cells and human cancers and that inhibition of Akt signaling pathway might be a promising strategy for cancer treatment. In the present study, we investigated the effect of the antitumor induced by exposing stomach cancer cell SGC-7901 to lactoferrin for 24 and 48 h. The cell viability was assessed by 3-(4,5)-dimethylthiahiazo(-z-yl)-3,5-di-phenytetrazoliumromide (MTT) assay and apoptosis was quantified by propidium iodide uptake and Annexin V-fluorescein isothiocyanate fluorescent probe label through flow cytometry. Our investigation indicates that inhibitory ratio of 50 μM lactoferrin for proliferation of stomach cancer cell SGC-7901 is much higher than 12.5 and 25 μM, and for the extended treatment time, the concentration of 50 μM has more efficiency than 100 μM lactoferrin. To elucidate a mechanism involved in its antitumor effect, we studied the Akt cell signaling pathway of SGC-7901 while treated by 50 μM of lactoferrin after 0, 24, and 48 h, particularly Akt phosphorylation of 2 individual residues, Ser473 and Thr308, Akt/glycogen synthase kinase-3β, forkhead in human rhabdomyosarcoma, and nuclear factor-κB proteins, respectively, activated by Western blot. The expressions of Akt, phosphorylated Akt Ser473, phosphorylated Akt Thr308, phosphorylated nuclear factor-κb p65 Ser536, and Bcl-2 significantly decreased; however, the expressions of phosphorylated glycogen synthase kinase-3β Ser9, phosphorylated forkhead in human rhabdomyosarcoma Ser256, and phosphorylated caspase-9 Ser196 increased in response to lactoferrin treatment in SGC-7901. These results suggest that lactoferrin inhibits Akt activation and modulates its downstream proteins phosphorylation in apoptosis of SGC-7901 human stomach cancer cells.

Stomach cancer is one of the most serious malignant tumors. The treatment of stomach cancer is varied (e.g., radiotherapy, chemotherapy and medication). However, radiotherapy and chemotherapy are harmful to humans, though they are very effective because they pay attention only to the focus of infection. Drug therapy includes chemical drugs and natural medicines. Now, it has been verified that many natural medicines have effects on stomach cancer, and people accredit them gradually (
Tsubono et al., 2001
Green tea and the risk of gastric cancer in Japan.
New Engl. J. Med. 2001; 334: 632-636
;
Yoo et al., 2005
Bovine lactoferrin and lactoferricin, a peptide derived from bovine lactoferrin, inhibit tumor metastasis in mice.
Cancer Sci. 2005; 88: 184-190
) because they are harmless. Lactoferrin is just one natural medicine and is readily available (
Levay and Viljoen, 1995
Lactoferrin: A general review.
Haematologica. 1995; 80: 252-267
).
The lactoferrin from bovine milk is a protein that has the function of transferring iron. Lactoferrin has many physiological functions such as supplementation of human nutrition (
Steijins and van Hooijdonk, 2000
Occurrence, structure, biochemical properties and technological characteristics of lactoferrin.
Br. J. Nutr. 2000; 84: 11-17
), antibiosis (
Farnaud and Evans, 2003
Lactoferrin-amultifunctional protein with antimicrobial properties.
Mol. Immunol. 2003; 40: 395-405
), antivirus (
Dapsanse et al., 2001
Differential pattern in circulating nitrogen derivatives, lactoferrin, and antilactoferrin antibodies in HIV type 1 and HIV type 2 infections.
AIDS Res. Hum. Retroviruses. 2001; 17: 1041-1045
;
Beljaars et al., 2004
Inhibition of cytomegalovirus infection by lactoferrin in vitro and in vivo.
Antiviral Res. 2004; 63: 197-208
;
Wakabayashi et al., 2004
Oral lactoferrin prevents body weight loss and increases cytoline responses during herpes simplex virus type 1 infection of mice.
Biosci. Biotechnol. Biochem. 2004; 68: 537-544
;
Waarts et al., 2005
Antiviral activity of human lactoferrin: Inhibition of alphavirus interactin with heparin sulfate.
Virology. 2005; 333: 284-292
), guard of host and regulation of immunity, promotion of iron absorption (
Suzuki et al., 2001
Molecular cloning and functional expression of a human intestinal lactoferrin receptor.
Biochemistry. 2001; 40: 15771-15779
), inhibition of growth and transfusion to cancer (
Varadhachary et al., 2004
Oral lactoferrin inhibits growth of established tumors and potentiates conventional chemotherapy.
Int. J. Cancer. 2004; 111: 398-403
;
Xiao et al., 2004
Lactoferrin down regulates G1 cyclin-dependent kinases during growth arrest of head and neck cancer cells.
Clin. Cancer Res. 2004; 10: 8683-8686
), and effect on the production of free radical. Now we find many physiological functions of lactoferrin, but research of inhibition of cancer at the molecular level is very scarce. Although many scientists confirm the inhibition of cancer by lactoferrin, the concrete mechanism is not clear. The manifestation of that inhibition is that lactoferrin can induce stomach cancer apoptosis.
Apoptosis was first discovered as a programmed cell death. A series of extracellular or intracellular events is involved in multicellular organisms during apoptosis, such as regulation of body growth and control of cell death by certain genes. Later studies found that the mechanism of apoptosis is very different than cell death. It is a process controlled by a diverse range of cell signals. Many factors may help regulate apoptosis. Heat, radiation, medicines, and other extracellular signals can bind nuclear receptors to trigger the release of intracellular apoptotic signals; some genes may originate intracellular apoptosis, such as c-myc, Bcl family, caspase, and Akt (
Bussink et al., 2008
Activation of the PI3-K/Akt pathway and implications for radioresistance mechanisms in head and neck cancer.
Lancet Oncol. 2008; 9: 288-296
), genes related to cell phagocytosis (families of Caenorhabditis elegans cell death protein), antigen encoding genes to apoptosis (families of tumor necrosis factor/Fas), death receptor families in the surface of cell, and systems of cell signaling pathways. During apoptosis, Akt acts as an antiapoptotic signaling molecule (
Dudek et al., 1997
Regulation of neuronal survival by serine-threonine protein kinase Akt.
Science. 1997; 275: 661-665
) and it plays a critical role in the function of cancer cells by promoting the cell survival of damaged or modulating downstream signaling family to induce apoptosis indirectly.
Akt, a Ser/Thr kinase, is also called phosphorylated kinase B. The phosphorylation of 2 individual residues, Ser473 and Thr308, is the basis of activation of Akt (
Pitt and Chen, 2008
The phosphatidylinositol 3-kinase/akt signaling pathway in medullary thyroid cancer.
Surgery. 2008; 144: 721-724
). Once activated, Akt can regulate growth factor-mediated cell survival by phosphorylating and deactivating proapoptotic proteins, such as caspase family, forkhead box class O family, Bcl-2 family, and glycogen synthase kinase-3β (GSK3β). Akt also modulates cell survival by stimulating prosurvival proteins such as nuclear factor κb (NF-κb). Overall, activation of Akt facilitates growth factor-mediated cell survival not only by phosphorylating and deactivating proapoptotic proteins, but also linking to other downstream mediators that facilitate the evasion from apoptosis or support tumor angiogenesis.
In this experiment, we investigated whether lactoferrin plays a role in inducing apoptosis of stomach cancer cell SGC-7901. This allowed the discovery of the mechanism of regulation of Akt signaling way through the process of apoptosis induced by lactoferrin, which may help to further elucidate the function of lactoferrin in anticarcinoma.

Cells were cultured in RPMI-1640 medium supplemented with 10% bovine serum in a humidified incubator with CO2 concentration of 5% at 37°C. Cells in logarithmic growth phase were used for further experiments.

The viability of the cells was assessed by MTT assay, which is based on the reduction of MTT by the mitochondrial dehydrogenase of intact cells to a purple formazan product. Briefly, stomach cancer cells in logarithmic growth phase were collected and 1 × 105 cells/well were dispensed within 96-well culture plates in 100-μL volumes. The cells were first incubated in bovine serum free from RPMI-1640 medium until its adherence. Then, different concentrations of lactoferrin (12.5, 25, 50, and 100 μM) were put in different wells. Each of the concentrations was regarded as a treated group; there was no lactoferrin in the control group. Each of the treated or control groups contained 3 parallel wells and culture for 24, 48, and 72 h. The MTT working solution was prepared as follows: 5 mg of MTT/mL of PBS was sterilized by filtering with 0.45-μm filter units. To each cultured well was added 20 μL of MTT working solution; the wells were then incubated continuously for 4 h. The mixture liquid in each well was discarded, then 150 μL of dimethyl sulfoxide was added to each well and incubated for 30 min. After incubation, 96-well plates were determined for absorbance at 570 nm using an ELISA plate reader.

To assess apoptosis, cells were first incubated in RPMI-1640 medium and allowed to adhere overnight. Then, 50 μM lactoferrin was used to treat the cells for 24 or 48 h. The culture media with different concentrations (12.5, 25, 50, and 100 μM) of lactoferrin were regarded as treated groups. There was no lactoferrin in the control group. Both adherent and floating cells were harvested after treatment. All the processes for Annexin V-propidium iodide method were followed per the instructions provided by the manufacturer.

The cells were first incubated in RPMI-1640 medium until adherence. Then, 40 mg/mL concentration of lactoferrin was used to treat the cells for 24 and 48 h. The culture media with different concentrations (12.5, 25, 50, and 100 μM) of lactoferrin were regarded as treated groups. There was no lactoferrin in the control group. For Western blotting, cells were washed with ice-cold PBS twice and lysed for 30 min at 4°C, then debris was removed by centrifugation for 15 min at 15,000 × g at 4°C, and equivalent amounts of protein were separated by 15% SDS gel and transferred onto nitrocellulose membrane. The membranes were first stained to confirm uniform transfer of all samples and then blocked in 5% milk for 1 h at room temperature. The membranes were incubated overnight with the primary antibodies (diluted 1:500, vol/vol, for antiphosphorylated NF-κb p65 Ser536, antiphosphorylated caspase-9 Ser196, and antiphosphorylated FKHR Ser256; diluted 1:300, vol/vol, for anti-Akt, antiphosphorylated Akt Ser473, antiphosphorylated Akt Thr308, and anti-Bcl-2) at 4°C in 5% BSA, and finally incubated with respective peroxidase conjugated secondary antibodies (1:1,500, vol/vol) for 1 h at room temperature. Blots were developed using a super-enhanced chemiluminescence detection kit, and the protein bands were visualized after exposure of the membranes to X-ray film (Kodak, Rochester, NY).

Effects of Lactoferrin on Growth Inhibition of Stomach Cancer Cells

To show whether the growth inhibition induced by lactoferrin in stomach cancer cells was caused by induction of apoptosis, stomach cancer cells were stained with both fluorescein isothiocyanate-labeled annexin-V and propidium iodide, and then analyzed by flow cytometry. As shown in Figure 2, exposure to lactoferrin at 50 μM for 24 and 48 h significantly induced apoptosis in SGC-7901 cell line, and the rate of apoptosis was increased in a time-dependent manner.

Lactoferrin induced apoptosis of stomach cancer cells through Akt signaling pathway, which includes many genes that can affect apoptosis. Understanding the mechanism of the possible inhibitory effect of bovine lactoferrin on proliferation of gastric adenocarcinoma cells could provide us a meaningful way by which people can prevent stomach cancer through daily diet.

Supported by grant no. CXT007-3-1 from the Innovative Team of Developmental Science and Technology of Bio-Dairy Products , Northeast Agricultural University (Harbin, China).