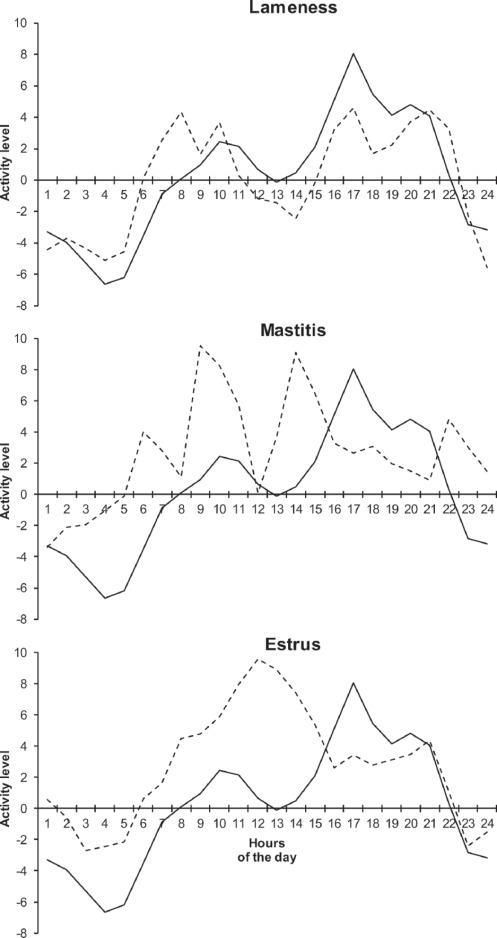 Short communication: Early modification of the circadian organization of cow activity in relation to disease or estrus

Open ArchivePublished:March 18, 2017DOI:https://doi.org/10.3168/jds.2016-11853
Short communication: Early modification of the circadian organization of cow activity in relation to disease or estrus
Previous ArticleSupplementation with rumen-protected methionine or choline during the transition period influences whole-blood immune response in periparturient dairy cows
Next ArticleTechnical note: Mining data from on-farm electronic equipment to identify the time dairy cows spend away from the pen

Biological rhythms are an essential regulator of life. There is evidence that circadian rhythm of activity is disrupted under chronic stress in animals and humans, and it may also be less marked during diseases. Here we investigated whether a detectable circadian rhythm of activity exists in dairy cows in commercial settings using a real-time positioning system. We used CowView (GEA Farm Technologies) to regularly record the individual positions of 350 cows in a Danish dairy farm over 5 mo and to infer the cows' activity (resting, feeding, in alley). We ran a factorial correspondence analysis on the cows' activities and used the first component of this analysis to express the variations in activity. On this axis, the activities obtained the following weights: resting = −0.15; in alleys = +0.12; feeding = +0.34. By applying these weights to the proportions of time each cow spent on each of the 3 activities, we were able to chart a circadian rhythm of activity. We found that average level of activity of a cow on a given day and its variations during that day varied with specific states (i.e., estrus, lameness, mastitis). More specifically, circadian variations in activity appeared to be particularly sensitive and to vary 1 to 2 d before the farmer detected a disorder. These findings offer promising avenues for further research to design models to predict physiological or pathological states of cows from real-time positioning data.

This study was part of the European project #311825 EU-PLF (Animal and farm-centric approach to precision livestock farming in Europe) co-financed by the European Commission. We thank Auvergne Traductions Techniques for checking and amending the English writing.