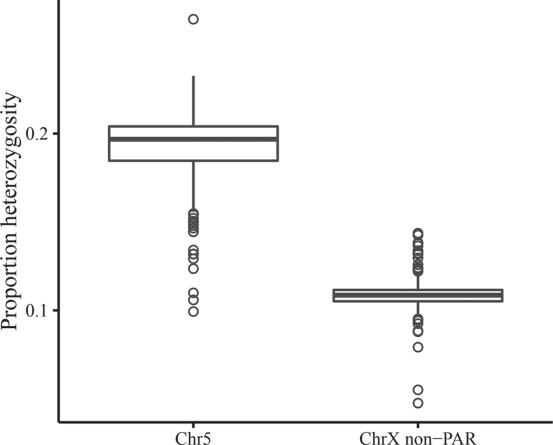 X chromosome inactivation (XCI) is a process by which 1 of the 2 copies of the X chromosomes present in female mammals is inactivated. The transcriptional silencing of one X chromosome achieves dosage compensation between XX females and XY males and ensures equal expression of X-linked genes in both sexes. Although all mammals use this form of dosage compensation, the complex mechanisms that regulate XCI vary between species, tissues, and development. These mechanisms include not only varying levels of inactivation, but also the nature of inactivation, which can range from being random in nature to driven by parent of origin. To date, no data describing XCI in calves or adult cattle have been reported and we are reliant on data from mice to infer potential mechanisms and timings for this process. In the context of dairy cattle breeding and genomic prediction, the implications of X chromosome inheritance and XCI in the mammary gland are particularly important where a relatively small number of bulls pass their single X chromosome on to all of their daughters. We describe here the use of RNA-seq, whole genome sequencing and Illumina BovineHD BeadChip (Illumina, San Diego, CA) genotypes to assess XCI in lactating mammary glands of dairy cattle. At a population level, maternally and paternally inherited copies of the X chromosome are expressed equally in the lactating mammary gland consistent with random inactivation of the X chromosome. However, average expression of the paternal chromosome ranged from 10 to 90% depending on the individual animal. These results suggest that either the mammary gland arises from 1 or 2 stem cells, or a nongenetic mechanism that skews XCI exists. Although a considerable amount of future work is required to fully understand XCI in cattle, the data reported here represent an initial step in ensuring that X chromosome variation is captured and used in an appropriate manner for future genomic selection.

Animal ethics approval was granted for all animal work by the Ruakura Animal Ethics Committee, Hamilton, New Zealand. No animals were killed for this study. Mammary tissue samples were obtained by needle biopsy in accordance with protocols approved by the ethics committee (approval AEC 12845).

To determine levels of heterozygosity in a representative sample of the New Zealand dairy population, whole genome sequencing, read mapping, and variant calling was undertaken on 556 individuals as previously described (
Littlejohn et al., 2016
Sequence-based association analysis reveals an MGST1 eQTL with pleiotropic effects on bovine milk composition.
Sci. Rep. 2016; 6 (27146958): 25376
). Variants were called across the entire genome including the X chromosome. BCFtools stats (
Li et al., 2009
1000 Genome Project Data Processing Subgroup
The sequence alignment/Map format and SAMtools.
Bioinformatics. 2009; 25: 2078-2079https://doi.org/10.1093/bioinformatics/btp352
) was used to obtain the per sample counts for heterozygous SNP at each position from the sequence reference set of variants. Proportion heterozygosity was calculated in each individual for each of the chromosomes using all 556 individuals for autosomes and the 312 females for the X chromosome.
For XCI analysis, all cows from which a mammary gland biopsy was collected were genotyped on the Illumina BovineHD BeadChip platform (Illumina, San Diego, CA). Genotypes for the sires of RNA-seq cows were obtained from either the Illumina BovineHD BeadChip (n = 43) or whole-genome sequencing (n = 257).
Genotypes for a lactating cow (subsequently referred to as the SRAcow) and her sire (accession numbers SRS597746 and SRS597673) were obtained from an independent data set by downloading whole genome sequence files from an existing sequence read archive previously used for multi-tissue RNA-seq (
Chamberlain et al., 2015
Extensive variation between tissues in allele specific expression in an outbred mammal.
BMC Genomics. 2015; 16 (26596891): 993https://doi.org/10.1186/s12864-015-2174-0
).
Illumina BovineHD BeadChip genotypes from 358 bulls and 3,307 cows were used to identify the pseudo-autosomal region in dairy cattle. The proportion of animals heterozygous at each SNP on chromosome X was calculated at each SNP for bulls and cows separately. The region for which the proportion of heterozygosity was similar between males and females was determined to be the pseudo-autosomal region.

Heterozygous genotype calls located within annotated exons (Ensemble build 79) across all chromosomes were identified from BovineHD BeadChip genotyping in the 298 RNA-seq cows described above. Sire genotypes were identified either from BovineHD BeadChip genotyping or whole genome sequencing. For the independent SRAcow, heterozygous genotype calls located within exons of all chromosomes were identified from sequence files downloaded from the sequence read archive. To allow a direct comparison of data from the SRAcow and cows in our study, the SRAcow sequence-called variants were filtered to retain only SNP corresponding to positions present on the BovineHD BeadChip. The use of genotypes derived from DNA, rather than the RNA-seq data itself is necessary for these analyses. If genotypes are determined from RNA-seq data considerable bias is introduced due to the fact that heterozygous sites are not identified where expression is highly skewed toward a single parent. Allelic depths at all heterozygous BovineHD BeadChip sites within exons were then determined from both data sets using GATK (
Xue et al., 2002
Aberrant patterns of X chromosome inactivation in bovine clones.
Nat. Genet. 2002; 31 (12032569): 216-220https://doi.org/10.1038/ng900
) SNP calling from RNA-seq BAM files.

Allelic depths from the 298 RNA-seq animal subset were combined and the proportion of reads containing the reference allele (UMD3.1; http://bovinegenome.org/?q=node/61) was calculated for heterozygous SNP with a combined read depth of greater than 100. The proportion of reference allele expression was examined at individual SNP, and as a chromosome average for each chromosome and also as a genome-wide average.

Cow Illumina BovineHD BeadChip genotypes showed highly heterozygous sites spread along the length of the X chromosome (Supplemental Figure S2; https://doi.org/10.3168/jds.2016-12490). In contrast, the presence of SNP reported as heterozygous in greater than 1% of the bulls was largely restricted to 2 (presumably pseudo-autosomal) regions. The first region extended from approximately 137 to 141 Mb and the second beginning at approximately 144 Mb and extending to the end of the chromosome (Supplemental Figure S2; https://doi.org/10.3168/jds.2016-12490). The entire region from 137 Mb to the end of the chromosome was considered to be pseudo-autosomal and excluded from further analysis.

Heterozygosity on the X Chromosome

Illumina BovineHD BeadChip analysis resulted in genotype data at sites within exons for 10,980 SNP across the 29 autosomes and 417 SNP on the X chromosome. Combining data from all animals with a total RNA-seq read depth of at least 100 across heterozygous sites within exons resulted in 72 and 6,280 informative sites on the X chromosome and all autosomes, respectively. Using these informative sites, distribution of percentage of reads mapping to the reference allele on all individual chromosomes was unimodal and centered around 50% (Supplemental Figure S3, https://doi.org/10.3168/jds.2016-12490, illustrates the distribution of mapping percentages at all informative sites across the genome).

Although the distribution of the proportion of paternal X chromosome expression was not significantly different to a unimodal distribution, visually the distribution appeared trimodal in the 298 RNA-seq cows analyzed and was suggestive of a “phenotype” under genetic control. PLINK GWAS analysis using proportion of paternal expression as the phenotype indicated a genomic region on chromosome X that may contribute to parent-of-origin-specific XCI. However, analysis of the same data using a Bayesian GWAS approach did not identify any significant correlation between genotype and parent-of-origin-specific XCI. Further analysis of the PLINK approach comparing significance of individual SNP after randomization of phenotypes and simulation of random phenotypes confirmed that the PLINK GWAS peaks identified were random in nature.

Analyses of SNP genotype heterozygosity in New Zealand dairy cattle for the purposes of identifying the PAR were similar to previously published reports in cattle (
Jansen et al., 2013
Assessment of the genomic variation in a cattle population by re-sequencing of key animals at low to medium coverage.
BMC Genomics. 2013; 14 (23826801): 446https://doi.org/10.1186/1471-2164-14-446
). The presence of 2 distinct regions of heterozygosity separated by a region of low heterozygosity in bulls is suggestive of 2 PAR, especially as the intervening region is frequently observed in a heterozygous state in cows. It is, however, possible that this pattern of heterozygosity observed in bulls is due to misassembly of chromosome X in UMD3.1. Analysis of the more recent Btau5.0.1 genome assembly (https://www.ncbi.nlm.nih.gov/assembly/GCA_000003205.6) does not provide any further insight as to whether these results represent 2 PAR or misassembly of the genome. Given the ambiguity of the PAR, the entire region of the X chromosome was excluded from further analysis.
The difference in the number of heterozygous SNP observed between the X chromosome and chromosome 5 is likely due, at least in part, to the hemizygous state of the X chromosome in males, which results in greater exposure to selection (
Gottipati et al., 2011
Analyses of X-linked and autosomal genetic variation in population-scale whole genome sequencing.
Nat. Genet. 2011; 43 (21775991): 741-743https://doi.org/10.1038/ng.877
). Furthermore, the large half-sib population structure in New Zealand dairy cattle (due to the widespread use of AI) has resulted in a relatively small number of highly used bulls transmitting their only copy of the X chromosome to all their daughters, which is also likely to be a contributing factor to the reduced diversity of the X chromosome when compared with chromosome 5.
Given the level of sequence variation expected between the dairy cattle population in these experiments and the cattle reference genome derived from a beef breed (
Daetwyler et al., 2014
Whole-genome sequencing of 234 bulls facilitates mapping of monogenic and complex traits in cattle.
Nat. Genet. 2014; 46 (25017103): 858-865https://doi.org/10.1038/ng.3034
), preferential mapping of sequences containing reference alleles was a potential risk. No bias was observed toward the reference allele in our Illumina HiSeq generated RNA-seq data at Illumina BovineHD BeadChip sites. This result is contradictory to a widely cited manuscript (
Degner et al., 2009
Effect of read-mapping biases on detecting allele-specific expression from RNA-sequencing data.
Bioinformatics. 2009; 25 (19808877): 3207-3212https://doi.org/10.1093/bioinformatics/btp579
); however, it supports the findings of others (
Panousis et al., 2014
Allelic mapping bias in RNA-sequencing is not a major confounder in eQTL studies.
Genome Biol. 2014; 15 (25239376): 467https://doi.org/10.1186/s13059-014-0467-2
). The discrepancy in the observation of mapping bias in RNA-seq studies reported in peer-reviewed publications is likely to be in most part due to the selection of BovineHD SNP sites during the design of the SNP chip. These sites do not include indels, which appear to cause the largest proportion of mapping bias in sequence data (data not shown). Due to the absence of mapping bias in this and other studies using this data set, mapping of RNA-seq data to parent-specific genomes was not undertaken.

At a population level, maternally and paternally inherited copies of the X chromosome are expressed equally in the lactating mammary gland, which is consistent with random inactivation of the X chromosome. At an individual level, mammary gland biopsies suggest that in some animals the cells collected in the sample may have all originated from either 1 or 2 stem cells that had undergone X inactivation (either maternal or paternal). However, at this stage the possibility of a genetic basis for skewing of XCI cannot be ruled out. Unlike the mouse, no parent of origin effects were observed. Although some aspects of XCI appear to be conserved across species, the differences observed indicate that a good deal of caution should be applied when extrapolating XCI results from one species to another. Further work using sequence-based genotypes to enhance resolution is required to provide a deeper understanding of XCI. Such an understanding is required before models that accurately reflect X chromosome usage can be generated for GWAS studies and for X chromosome variation to be captured in a truly informative manner in genomic prediction. To be truly informative, these GWAS and genomic prediction models would capture not only the Mendelian transmission, but also the mono-allelic expression of this chromosome in females.