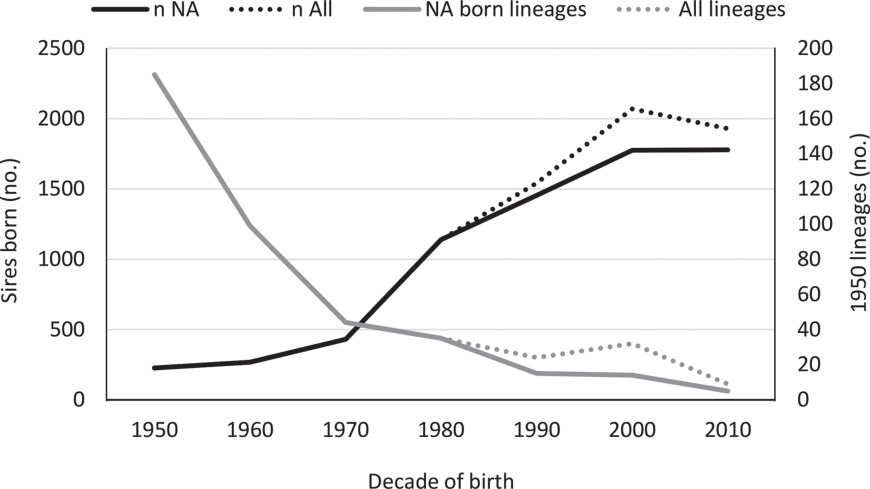 Jersey cattle are the second most prominent breed in the United States and represent a growing portion of the dairy cow population in the United States. The objectives of our study were to determine the male lineages of Jersey sires with official genetic evaluations and to determine whether there are differences in sire conception rate among lineages. Paternal lineages back to the 1950s were extracted from genetic evaluation files of the Council on Dairy Cattle Breeding (CDCB, Bowie, MD) for all sires with an official United States genetic evaluation and that were enrolled with the National Association of Animal Breeders (Madison, WI). Further tracing of male lineages was performed by accessing the pedigree database of Jersey Origins LLC (Stitzer, WI). Only paternal lineages were considered because we were interested in transmission of the Y chromosome. Sire conception rate evaluations were also retrieved from CDCB for 1,116 bulls. Nearly all North American bulls born in the decade beginning 2010 could be traced to Secret Signal Observer or Advancer Sleeping Jester, who together account for 98.9% of paternal lineages. Both bulls plus the 3 additional bulls that account for the remaining 1.1% of current descendants can be traced to a single bull (Champion Flying Fox) born on the island of Jersey in 1898. When considering sires imported into the United States, the majority (71%) trace their paternal lineage to Secret Signal Observer or Advancer Sleeping Jester, and 97% can be traced to Champion Flying Fox. Sire conception rates were higher by 0.30 percentage points in the Secret Signal Observer line than in the Advancer Sleeping Jester line, which was significant. The small number of paternal lineages for recently born artificial insemination Jersey sires indicates that there is limited genetic diversity for much of the Y chromosome, suggesting that autosomal variation may be a more important source for differences in male fertility than the Y chromosome.

Funding from USDA-Agricultural Research Service award 58-5402-4-015 is greatly appreciated; J. S. Idun was supported by an undergraduate research grant from the College of Agricultural Sciences (Penn State University, University Park). This study was possible thanks to the availability of genetic evaluations from the Council on Dairy Cattle Breeding (Bowie, MD) and ancestor information that was originally assembled by the American Jersey Cattle Association (Reynoldsburg, OH).