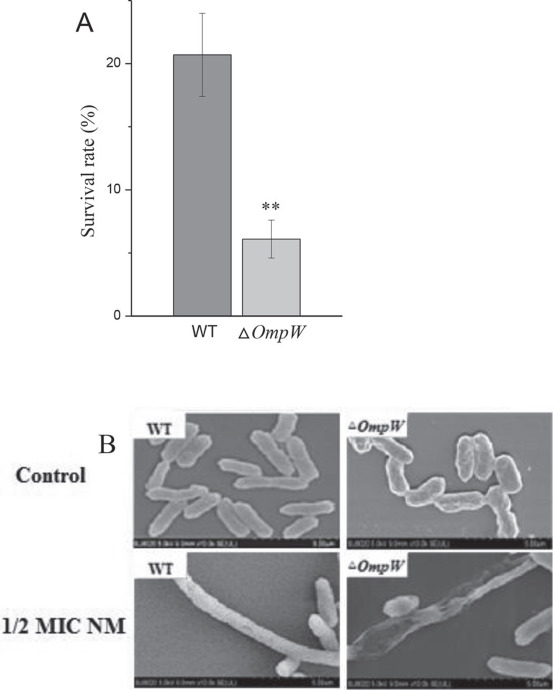 Cronobacter sakazakii is associated with severe infections including sepsis, neonatal meningitis, and necrotizing enterocolitis. Antibiotic resistance in Cronobacter species has been documented in recent years, but the genes involved in resistance in Cronobacter strains are poorly understood. In this study, we determined the role of outer membrane protein W (OmpW) on survival rates, morphologic changes, and biofilm formation between wild type (WT) and an OmpW mutant strain (ΔOmpW) under neomycin sulfate stress. Results indicated that the survival rates of ΔOmpW were significantly reduced after half minimum inhibitory concentration (½ MIC) treatment compared with the WT strain. Filamentation of C. sakazakii cells was observed after ½ MIC treatment in WT and ΔOmpW, and morphologic injury, including cell disruption and leakage of cells, was more predominant in ΔOmpW. Under ½ MIC stress, the biofilms of WT and ΔOmpW were significantly decreased, but decreasing rates of biofilm formation in mutant strain were more predominant compared with WT strain. This is the first report to determine the role of OmpW on survival, morphological changes, and biofilm formation in C. sakazakii under neomycin sulfate stress. The findings indicated that OmpW contributed to survival and reduction of morphological injury under neomycin sulfate stress. In addition, enhancing biofilm formation in ΔOmpW may be an alternative advantage for adaptation to neomycin sulfate stress.