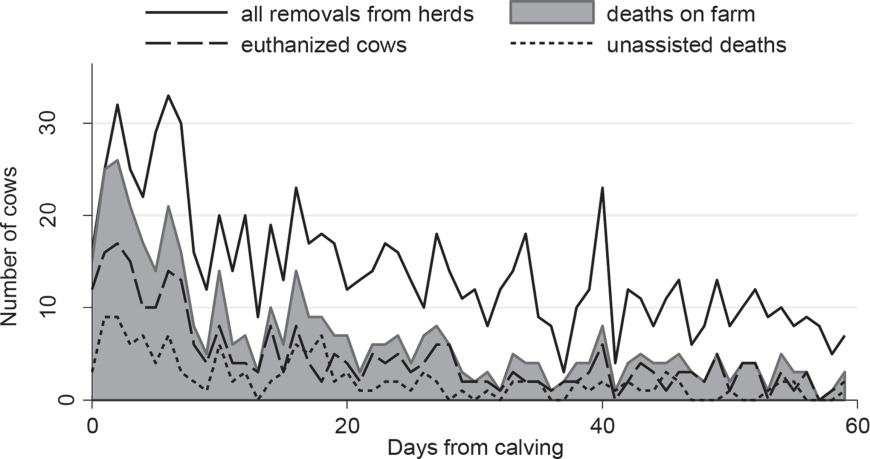 On-farm death (OFD) of a dairy cow is always a financial loss for a farmer, and potentially a welfare issue that has to be addressed within the dairy industry. The aim of this study was to explore the associations between OFD of dairy cows, housing, and herd management in freestall barns. To achieve the goal, we followed 10,837 cows calving in 2011 in 82 herds. Data were gathered with observations and a structured interview during farm visits and from a national dairy herd improvement database. The hazard of OFD was modeled with a shared frailty survival model, with SAS 9.3 PHREG procedure (SAS Institute Inc., Cary, NC). The study population was 58% Ayrshire and 42% Holstein cows. The median herd size and mean milk yield in the study herds were 116 cows and 9,151 kg of milk per cow per year. The overall probability of OFD was 6.0%; 1.8% of the cows died unassisted and 4.2% were euthanized. Variation in OFD percentage between individual herds was large, from 0 to 16%, accounting for 0 to 58% of all removals in the herds. Keeping close-up dry cows in their own group was associated with higher hazard of OFD [hazard ratio (HR) = 1.37] compared with keeping them in the same pen with far-off dry cows. Higher hazard on OFD was observed when barns had only one kind of calving pen; single (HR = 2.09) or group pens (HR = 1.72), compared with having both of those types. The hazard of OFD was lower if the whole herd was housed in barns or pens that had only 1 type of feed barrier at the feed bunk, namely post-and-rail (HR = 0.51) or a type with barriers between the cow's heads (HR = 0.49), compared with having 2 types. Lower OFD hazard was observed with wider than 340 cm of walking alley next to the feeding table (HR = 0.75), and with housing a whole herd in pens with only 1 type of walking alley surface, specifically slatted (HR = 0.53) or solid (HR = 0.48), compared with having both types. The hazard of OFD was higher with stalls wider than 120 cm (HR = 1.38) compared with narrower stalls. The hazard of OFD was also associated with breed, parity, and calving season. This study identified many factors that contribute to the incidence of OFD of dairy cows. The solutions for reducing on-farm mortality include housing, management, and breeding choices that are most probably herd specific.

Study herds were selected from the herds in the Finnish DHI database, operated by ProAgria Agricultural Data Processing Centre (http://www.mloy.fi), previously described and used by other authors (
Gröhn et al., 1984
Epidemiology and genetic basis of ketosis in Finnish Ayrshire cattle.
Prev. Vet. Med. 1984; 3: 65-77
;
Olsson et al., 2001
Disease recording systems and herd health schemes for production diseases.
Acta Vet. Scand. Suppl. 2001; 94 (11875853): 51-60
;
Kyntäjä and Niskanen, 2007
Milk production, animal recording, dairy advisory services and cattle breeding in Finland.
in: Breeding, Production Recording, Health and the Evaluation of Farm Animals - EAAP 121. Proceedings of the 35th Biennial Session of ICAR, Kuopio, Finland, June 6–10, 2006. Wageningen Academic Publishers, Wageningen, the Netherlands2007: 13-16
). All herds in the database with a mean herd size greater than 80 in 2010 (n = 184) were invited to participate in the project.
A total of 82 herds volunteered and met the inclusion criteria. The criteria were (1) using a conventional production system (not organic), (2) housing in an insulated freestall barn at least for 2 yr before the time of the farm visit, and continuing to be housed there during the survey, and (3) herds with an automatic milking system used at least 2 milking robots with a reasonable stocking capacity (at least 45 cows per robot in 2010).
The study herds were visited once between January and April in 2012. The herd owners were interviewed about the herd management with a predesigned questionnaire and barns and animals were observed by 1 of the 3 veterinarians that were equally trained for the visits, with oral and written instructions and 3 training herd visits. The cow-level data on breed, parity, calving date, milk yield, removal method, and reason were received from DHI database.

Descriptive statistics were first calculated for the data. The percentages were calculated based on the total number of study cows 10,907. Cows of breeds other than Ayrshire or Holstein were then excluded (n = 69), and the hazard of OFD was statistically modeled with a survival model, where clustering of cows within herds was taken into account by animals in the same herd sharing a random, frailty effect. In the analysis, a total of 10,837 cows were followed for 305 d, starting from their first calving day of the year 2011.
A shared frailty survival model is an extension of the standard semiparametric Cox model. The model can be written as
where is the same as the model for standard semiparametric Cox model [λ0j(t) are the baseline hazard functions and β is a vector of fixed effect parameters to be estimated] and the frailties Zi are assumed to be identically and independently distributed random variables with a common density function (
Wienke, 2011
Frailty Models in Survival Analysis.
CRC Press, Boca Raton, FL2011
).
The study period was between January 1, 2011, and October 31, 2012. Only 1 lactation period per cow was included. The modeled outcome was time from calving until unassisted death or euthanasia on farm. The observations were censored if a cow left the herd for any other removal reason or if the study period ended before the outcome of interest occurred. Noncompleted lactations were also included, which is possible in using survival analysis.
The potential explanatory variables were grouped into cow-level characteristics and herd-level attributes or practices. The first step of the modeling process was univariable screening, and cow-level features were introduced into a model individually in addition to the herd frailty. Next, cow-level variables with P < 0.25 in the univariable models were added into a joint model, and variables with P > 0.1 were removed one by one from this model. The examined cow-level characteristics were breed, animal born at farm or bought, age at arrival to herd, age at first calving, parity of the study lactation, calving season, and milk yield relative to time from calving.
The herd-level variables were then added individually to the model built during the previous step,. The herd-level variables with P < 0.25 in univariable screening were then added in the model jointly and the model was again reduced until all variables were statistically significant (P ≤ 0.05).
Altogether, 8 cow-level and 39 herd-level housing and management attributes were studied (Supplemental Tables S1–S3; https://doi.org/10.3168/jds.2017-13420). Potential collinearity between the variables was examined by visual examination of frequency tables and with 2-way chi-squared tests with no indications of collinearity.
The associations between OFD and herd size, stocking density, square meters per lactating cow in a pen, type of ventilation, milking and feeding systems in use, feeding space per cow and feed rack type, the properties of walking and lying surfaces, access to pasture or outdoor exercise area, and the time that the cows had been in the barns were explored. Likewise, associations between OFD and grouping strategies of pregnant heifers, dry cows, and lactating cows in the barn, calving pen type, time of moving the cow into a calving pen before calving, time spent in the calving pen, and the change in the walking and lying area properties when a heifer moves from its initial group to a group of lactating cows were studied.
After finding the model with main effects, all meaningful interactions were tested in the model. Because diseases usually precede OFD, but often act as intervening variables between the effects of management and housing and OFD (
Dohoo et al., 2009
Veterinary Epidemiologic Research.
2nd ed. VER Inc., Charlottetown, Canada2009
), they were not included in the model (the descriptive analysis and associations between OFD and of the most important diseases will be published separately). The statistical models described above were fitted using the PHREG procedure of SAS 9.3 (SAS Institute Inc., Cary, NC). Gamma distribution was used for the frailties. The assumptions of the model include the proportional hazards assumption and the assumption of linearity for continuous explanatory variables. These assumptions were examined using graphs and tests obtained from the PHREG procedure. Univariate survival plots were also plotted using the LIFETEST procedure in SAS.

The Incidence of OFD and Reported Reasons

Associations of Housing and Management Practices on the Hazard of OFD

The hazard of OFD was significantly higher if the close-up dry cows were kept in their own group compared with keeping them with other dry cows. Having both group and single calving pens in a barn was beneficial compared with having only 1 of the 2 types of pens (Table 1).
Table 1The associations of the statistically significant factors on the hazard of on-farm death of 10,837 cows in 82 herds (distribution of cow- and herd-level observations between the groups in parentheses)
1 Hazard ratio.
2 P-values of comparisons of the group with the baseline group. The bold P-values represent the significance for the entire variable.
3 Mean of different pens, weighted by the number of cows in the pen.
Feed barrier type was significantly associated with OFD. The hazard of OFD was lower if the herd was housed in barns or pens with a single type for the whole herd, compared with having 2 types of feed barriers. The OFD hazard was lower if the width of the walking alley next to the feed rack was wider and if the whole herd was housed in barns and pens with only 1 type of walking alley surface, slatted or solid, compared with having 2 types floors. The odds of OFD were higher if the width of the stalls for lactating cows was 120 cm or wider compared with narrower stalls.
Breed, parity, and calving season were significant cow-level variables in the model. Holstein cows had a greater hazard of dying on farm than Ayrshire cows, and the hazard increased with parity. Calving between September to December decreased the hazard of OFD compared with other calving seasons.

Incidence and Reasons for OFD

Limitations of the Study

The results of our study can be extrapolated only to herds housed in freestall bars with cubicles and with relatively similar herd sizes, breeds, and milk yields. The study period was relatively short, and we probably could have gained more information by adding several study years. However, in the final model we found many significant variables associated with OFD with no collinearity between them. This being so, our study increased our knowledge on OFD of dairy cows.

This study identified animal- and housing-related factors that contributed to the incidence of on-farm deaths of dairy cows in freestall barns. Avoiding unnecessary group changes during the dry period and eliminating unnecessary variations in barn facilities in lactating cow pens seem potential options for reducing OFD. In addition, having both group and single calving pens, providing enough space at the walking alleys, and offering cows a feed bunk with barriers between cow heads may help improving cow survival and longevity.

We gratefully acknowledge the dairy farmers participating this study. We also thank all the researchers of LYTO2–Project for good cooperation, and especially Mira Tenhunen, Tarja Kujala, and Mari Utriainen, who were postgraduate students, and Marika Virtanen, who was a graduate student at the University of Helsinki, for their help in collecting and inputting data. This study was funded by the Ministry of Agriculture and Forestry in Finland, Walter Ehrström's foundation, Valio Ltd., and Finnish Veterinary Foundation (all located in Helsinki, Finland).