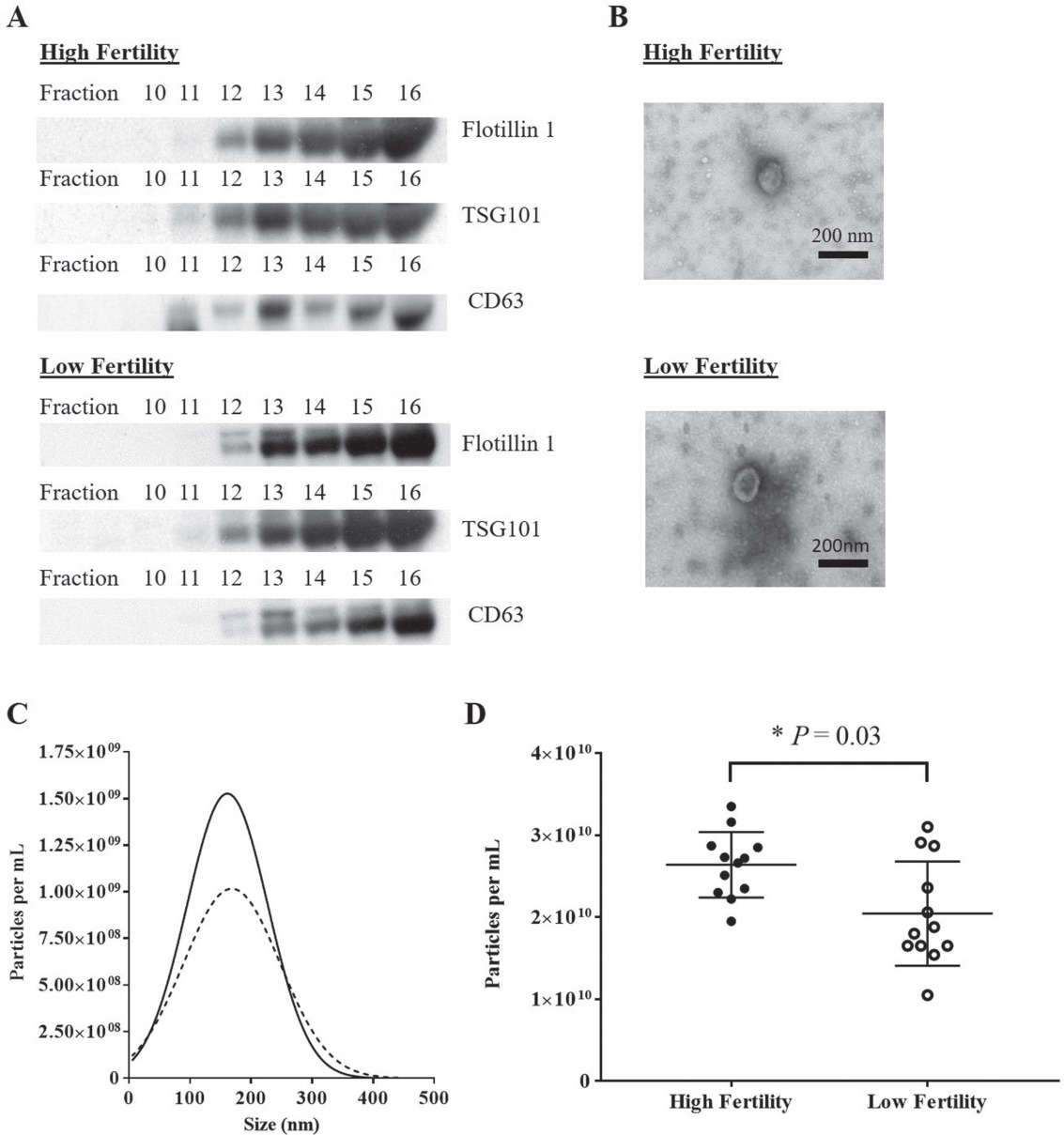 Open ArchivePublished:April 25, 2018DOI:https://doi.org/10.3168/jds.2017-14190
Proteome profiling of exosomes derived from plasma of heifers with divergent genetic merit for fertility
Previous ArticleTechnical note: Evaluation of the diagnostic accuracy of 2 point-of-care β-hydroxybutyrate devices in stored bovine plasma at room temperature and at 37°C
Next ArticleResponses of dairy cows with divergent residual feed intake as calves to metabolic challenges during midlactation and the nonlactating period

The current study evaluated exosomes isolated from plasma of heifers bred to have high or low fertility through developing extreme diversity in fertility breeding values, however, key animal traits (e.g., body weight, milk production, and percentage of North American genetics) remained similar between the 2 groups. The exosomes were isolated by a combined ultracentrifugation and size exclusion chromatography approach and characterized by their size distribution (nanoparticle tracking analysis), morphology (transmission electron microscopy), and presence of exosomal markers (immunoblotting). In addition, a targeted mass spectrometry approach was used to confirm the presence of 2 exosomal markers, tumor susceptibility gene 101 and flotillin 1. The number of exosomes from plasma of high fertility heifers was greater compared with low fertility heifers. Interestingly, the exosomal proteomic profile, evaluated using mass spectrometry, identified 89 and 116 proteins in the high and low fertility heifers respectively, of which 4 and 31 were unique, respectively. These include proteins associated with specific biological processes and molecular functions of fertility. Most notably, the tetratricopeptide repeat protein 41-related, glycodelin, and kelch-like protein 8 were identified in plasma exosomes unique to the low fertility heifers. These proteins are suggested to play a role in reproduction; however, the role of these proteins in dairy cow reproduction remains to be elucidated. Their identification underscores the potential for proteins within exosomes to provide information on the fertility status and physiological condition of the cow. This may potentially lead to the development of prognostic tools and interventions to improving dairy cow fertility.

Dairy cows with good fertility and reproductive performance are vital for the profitability and sustainability of dairy farms, especially in seasonal-calving pasture-based systems (
Burke and Verkerk, 2010
The development of reproductive management practices in New Zealand: What will the future hold in a consumer-focused, environmentally-conscious, export-driven marketplace?.
Soc. Reprod. Fertil. Suppl. 2010; 67 (21755683): 341-355
). As a consequence of the increased metabolic pressure for milk production in past decades, fertility of the dairy cow has decreased (
Roche et al., 2011
Nutrition × reproduction interaction in pasture-based systems: Is nutrition a factor in reproductive failure?.
Anim. Prod. Sci. 2011; 51: 1045-1066
). Furthermore, an inflammation through immune (
Formigoni and Trevisi, 2003
Transition cow: Interaction with fertility.
Vet. Res. Commun. 2003; 27 (14535382): 143-152
;
Piccinini et al., 2004
The evaluation of non-specific immune status of heifers in field conditions during the periparturient period.
Vet. Res. 2004; 35 (15369657): 539-550
) or infectious (
McDougall et al., 2007
Association between endometritis diagnosis using a novel intravaginal device and reproductive performance in dairy cattle.
Anim. Reprod. Sci. 2007; 99 (16630700): 9-23
) challenge can have long-term consequences for the fertility of dairy cows. This peripartum inflammatory state likely contributes to the decline in fertility and reproductive success by disrupting endocrine signaling, negatively affecting uterine homeostasis, and invoking perturbations in ovarian function and oocyte development (
Karsch et al., 2002
Mechanisms for ovarian cycle disruption by immune/inflammatory stress.
Stress. 2002; 5 (12186688): 101-112
;
Bromfield et al., 2015
Physiology and Endocrinology Symposium: Uterine infection: Linking infection and innate immunity with infertility in the high-producing dairy cow.
J. Anim. Sci. 2015; 93 (26020298): 2021-2033
).
It has recently been established that exosomes can mediate inter- and intracellular signaling under normal and pathological conditions through the transfer of bioactive molecules (e.g., proteins and microRNA) that can modulate the biological function of the recipient cells (e.g., immune response, cellular adhesion, development, proliferation, and metabolism;
Corrado et al., 2013
Exosomes as intercellular signaling organelles involved in health and disease: Basic science and clinical applications.
Int. J. Mol. Sci. 2013; 14 (23466882): 5338-5366
;
McGough and Vincent, 2016
Exosomes in developmental signalling.
Development. 2016; 143 (27436038): 2482-2493
;
Crookenden et al., 2017
Effect of circulating exosomes from transition cows on Madin-Darby bovine kidney cell function.
J. Dairy Sci. 2017; 100 (28456398): 5687-5700
). Several studies have identified the involvement of exosomes in providing autocrine (i.e., local signals between the same cell type, such as cancer cells;
Weaver, 2017
Autocrine role of exosomes in cellular adhesion, migration, and invasion.
Biophys. J. 2017; 112 (Abstr.): 38a
), paracrine (i.e., local signals between different cell types, such as between epithelial cancer cells and stromal cells;
Heneberg, 2016
Paracrine tumor signaling induces transdifferentiation of surrounding fibroblasts.
Crit. Rev. Oncol. Hematol. 2016; 97 (26467073): 303-311
), and endocrine (i.e., distant signals between many types of cells usually carried in bodily fluids, such as blood;
Zduriencikova et al., 2015
Potential biomarkers of exosomal cargo in endocrine signaling.
Endocr. Regul. 2015; 49 (26238497): 141-150
) signaling. Exosomes are membranous nanovesicles of endocytic origin that are defined by characteristics such as size, density, and morphology as well as the presence of exosomal markers [e.g., tumor susceptibility gene (TSG) 101 and flotillin 1;
Lötvall et al., 2014
Minimal experimental requirements for definition of extracellular vesicles and their functions: A position statement from the International Society for Extracellular Vesicles.
J. Extracell. Vesicles. 2014; 3 (25536934): 26913
]. Concomitant changes in the concentration or the content of exosomes may provide informative details of the overall health condition of the animal, including the possible physiological status underlying fertility.
To improve our knowledge in key areas of dairy cow reproductive physiology, a long-term project was initiated using cows with similar key animal traits (e.g., BW, milk production, and percentage of North American genetics) but with extreme diversity in their EBV for fertility. It was envisaged that the underlying physiological basis of low-fertility heifers could be elucidated through the investigation of the content (e.g., proteins) encapsulated by exosomes isolated from the plasma of 2 cohorts of heifers that were identified to be of either low or high fertility. We hypothesized that heifers selected on the basis of differential fertility EBV would have exosomal signatures in plasma representative of their fertility genotype.

Blood was drawn from a jugular vein into EDTA Vacutainer tubes (Greiner Bio-One, Kremsmunster, Austria). The tubes were then centrifuged at 1,120 × g for 12 min at 4°C, and the plasma aspirated was stored at −80°C.

Exosomes were isolated by coupling ultracentrifugation and size exclusion chromatography as described by
Almughlliq et al., 2017
Effect of exosomes from plasma of dairy cows with or without an infected uterus on prostaglandin production by endometrial cell lines.
J. Dairy Sci. 2017; 100 (28865856): 9143-9152
. In brief, plasma (10 mL) of high- (n = 12) and low- (n = 12) fertility heifers was diluted with an equal volume of PBS (Gibco, Life Technologies Australia Pty Ltd., Mulgrave, Victoria, Australia) and centrifuged at 2,000 × g for 30 min at 4°C, 12,000 × g for 30 min at 4°C, and at 100,000 × g for 75 min at 4°C. It was then filtered through a 0.22-μm polyethersulfone membrane filter (Corning Inc., Corning, NY) and then ultracentrifuged at 100,000 × g for 120 min. The pellet was reconstituted in 500 µL of PBS and layered on a qEV size exclusion column (Izon Science, Christchurch, New Zealand). Fractions of 500 µL were collected in separate tubes (n = 16) per the manufacturer's instructions. The 16 fractions were concentrated using a vacuum concentrator (Eppendorf Concentrator Plus, Eppendorf, Hamburg, Germany) for 1.5 h at room temperature and stored at −80°C until further analyses.

Proteomic Analysis of High- and Low-Fertility Plasma Exosomes by MS

Exosomes (10 µg of protein) in PBS were sonicated for 5 min to disrupt the exosome membrane and expose proteins for proteomic analyses by liquid chromatography-MS/MS. In brief, each of the exosome fractions was treated with 50 mM ammonium bicarbonate and then with 20 mM dithiothreitol and reduced for 1 h at 65°C. The samples were then alkylated in 100 mM iodoacetamide at 37°C in the dark for 60 min. Samples were incubated with trypsin (Sigma-Aldrich) at a 1:50 ratio overnight at 37°C for 18 h, and the reaction was stopped by the addition of 0.1% formic acid. The samples were combined and desalted according to a modified version of the stage tip protocol using a 3-mm piece of an Empore C18 (octadecyl) SPE Extraction Disk (3M, Minneapolis, MN;
Rappsilber et al., 2003
Stop and go extraction tips for matrix-assisted laser desorption/ionization, nanoelectrospray, and LC/MS sample pretreatment in proteomics.
Anal. Chem. 2003; 75 (12585499): 663-670
;
Vaswani et al., 2015
Applying SWATH mass spectrometry to investigate human cervicovaginal fluid during the menstrual cycle.
Biol. Reprod. 2015; 93 (26108790): 39
). The eluted peptides were dried in a vacuum centrifuge before spectral acquisition.

Targeted MS Approach for the Identification of Exosome Marker

MS for the Identification of Exosomal Cargo

The digested protein samples were analyzed using the TripleTOF 5600 mass spectrometer (ABSciex) coupled to an Eksigent (Dublin, CA) nano ultra 1D+ HPLC system. The ChromXP C18-CL TRAP (10 mm × 0.3 µm, 120 Å) and analytical ChromXP C18 columns (0.075 µm × 150 mm; 3 µm, 120 Å; Eksigent) were used to separate the digested proteins. A 5-µL aliquot of digested material was injected onto the column and separated with a linear gradient of 5 to 40% buffer B for 58 min (buffer A: 0.1% formic acid/water; buffer B: acetonitrile/0.1% formic acid), 40 to 50% buffer B for 5 min, and 50 to 95% buffer B for 10 min with a flow rate of 250 nL/min. The column was flushed with 95% buffer B for 15 min and re-equilibrated with 2% buffer B for 6 min. The in-depth proteomic analysis was performed using information dependent acquisition on the TripleTOF 5600 System (ABSciex, Redwood City, CA) interfaced with a nanospray ion source. The source parameters were as follows (arbitrary units): curtain gas value = 25, ion source gas = 10, and declustering potential = 70. A 250-ms accumulation time was set for the time-of-flight MS survey scan and, from this scan, the 12 most intense precursor ions were selected automatically for the MS/MS analysis (accumulation time of 150 ms per MS/MS scan).
Protein identification was determined using ProteinPilot Software (version 4.5 beta, AB Sciex) with the Paragon algorithm and against UniProt (Bos taurus protein database). The search parameters were as follows: sample type, identification; cys alkylation, iodoacetamide; digestion, trypsin; instrument, TripleTOF 5600; special factors, none; and ID focus, biological modifications. False discovery rate was selected in the processing method, which automatically set the detected protein threshold to 0.05 (10%). The low protein threshold value allowed a full range of identifications to be made, therefore providing a more comprehensive assessment of the quality of the data. The data were processed and categorized based on biological process (defined as the function of a particular protein in the context of a larger network of proteins that interact to accomplish a process at the level of the cell or organism) and molecular function (defined as the function of the protein by itself or with directly interacting proteins at a biochemical level) with the ontology and pathway analysis using the protein analysis through an evolutionary relationships tool (Panther; http://www.pantherdb.org/) and gene ontology (GO) algorithms (
Mi et al., 2016
PANTHER version 10: Expanded protein families and functions, and analysis tools.
Nucleic Acids Res. 2016; 44 (26578592): D336-D342
).

The statistical analyses were performed using a commercially available software package (Prism 6, GraphPad Inc., La Jolla, CA). A Mann–Whitney test was used to analyze and compare the total exosome particle number between the high- and low-fertility treatment groups. A value of P < 0.05 was considered to be statistically significant, and the data are presented as mean ± SD.

YQK is supported by a student scholarship from a partnership fund (DRCX1302) between the New Zealand Ministry of Business, Innovation and Employment (Wellington, New Zealand) and New Zealand dairy farmers through DairyNZ Inc. (Hamilton, New Zealand). FBA is supported by a student scholarship from Shimadzu Corporation (Kyoto, Japan). The laboratory experiments were funded, in part, by the Australian Research Council (Canberra, Australia; grant no. ARC DP170104273 and ARC LP160101854), and the tissues investigated originated from a research platform funded by the aforementioned partnership fund (DRCX1302). We also thank the technical and farm staff at DairyNZ Ltd. for collecting the plasma samples and appreciate the scientific and technical assistance of the Australian Microscopy and Microanalysis Research Facility at the Centre for Microscopy and Microanalysis at the University of Queensland (Brisbane, Queensland, Australia).