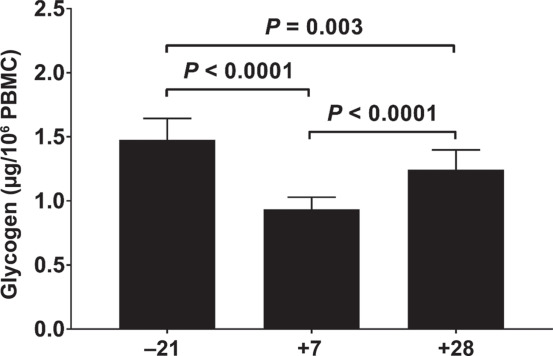 Open ArchivePublished:July 25, 2018DOI:https://doi.org/10.3168/jds.2018-14549
Nutrient-sensing kinase signaling in bovine immune cells is altered during the postpartum nutrient deficit: A possible role in transition cow inflammatory response
Previous ArticleChanges in biomarkers of nutrient metabolism, inflammation, and oxidative stress in dairy cows during the transition into the early dry period
Next ArticleEffect of age of introduction to an automated milk feeder on calf learning and performance and labor requirements

Transition dairy cows experience a nutrient deficit, particularly in the immediate postpartum period. At the same time, the inflammatory balance is altered and cows exhibit an immune response primed for inflammatory response rather than tolerance. The mechanistic link that might be underlying the immunological effects due to the lack in nutrients is not fully understood. Studies in other species demonstrate an orchestrating role of nutrient-sensing kinases in the determination of immune phenotypes and immune cell proliferation and differentiation. Our primary objective was to investigate changes in energy storage and signaling through the protein kinase B (AKT)/mechanistic target of rapamycin complex 1 (mTOR) pathway in bovine immune cells in the transition period, as well as the association with cytokine expression profiles. A secondary objective was to test if supplementation with branched-chain amino acids alone or in combination with oral propylene glycol had any effect on the measured parameters. To assess cellular energy storage, glycogen concentration was measured by an enzymatic-fluorometric method in peripheral blood mononuclear cells (PBMC) of multiparous Holstein cows (n = 72) at 3 time points in the transition period (21 d before, 7 and 28 d after calving). At the same time points, phosphorylation of proteins in the AKT/mTOR pathway was assessed by immunoblotting in PBMC from 60 animals. Whole-blood leukocyte cytokine gene expression of IL12B, IL6, IL1B, TNF, and IL10 was measured in samples from 50 animals by reverse-transcription quantitative PCR with and without stimulation of samples with 10 ng/mL of lipopolysaccharide. Compared with glycogen concentration of prepartum PBMC, glycogen concentration decreased by 37% on d 7 postpartum. The activation of AKT/mTOR in bovine PBMC postpartum was reduced compared with prepartum values. Results of reverse-transcription quantitative PCR showed an increase in cytokine gene expression postpartum compared with prepartum values. Supplementation with branched-chain amino acids alone or in combination with oral propylene glycol did not alter glycogen storage, AKT/mTOR activity, or inflammatory balance as assessed by the measured parameters in this study. We conclude that the nutrient deficit of the immediate postpartum period is sensed by bovine immune cells, and that it affects their energy storage as well as cellular signaling pathways postpartum. Temporal associations with changes in cytokine gene expression are intriguing and warrant further investigation of the role of this pathway as a possible link between metabolism and immune phenotype postpartum.

Samples were collected from animals enrolled in a larger study investigating the role of BCAA supplementation alone or in combination with propylene glycol in postpartum dairy cows. All procedures for this experiment were approved by the Cornell University Institutional Animal Care and Use Committee (number 2014–0118). Cows were housed in the Cornell University Ruminant Center in Harford, New York, and samples were collected between February and June 2016. All cows were fed the same dry period and fresh period TMR ad libitum, and samples were analyzed throughout the study using near infrared analysis (Cumberland Valley, Maugansville, MD). Cows were fed once daily at 0700 h using individual feed buckets in a tiestall. Animals were enrolled in 1 of 3 treatment groups on the day of calving: cows that received 550 g of a rumen-protected (rp; hydrogenated vegetable oil-soy based) BCAA supplement (Balchem Corporation, New Hampton, NY) as a top-dress mixed into 200 g of molasses for the first 35 DIM, cows that received the same treatment as BCAA as a top-dress mixed in molasses once a day for the first 35 DIM plus 300 mL of propylene glycol as a drench once a day for the first 7 DIM (BCAAPG), and an untreated control group that only received 200 g of molasses (CTRL). The BCAA treatment was composed of 375 g of 27% rp l-leucine, 85 g of 48% rp l-isoleucine, and 90 g of 67% rp l-valine. The dose was determined based on being able to achieve the minimum supplementation rate shown in a previous study to increase free BCAA in blood using a postruminal infusion (
Mackle et al., 1999
Effects of branched-chain amino acids and sodium caseinate on milk protein concentration and yield from dairy cows.
J. Dairy Sci. 1999; 82 (10022018): 161-171
10.3168/jds.S0022-0302(99)75220-3
;
Larsen et al., 2014
Abomasal protein infusion in postpartum transition dairy cows: effect on performance and mammary metabolism.
J. Dairy Sci. 2014; 97 (24996271): 5608-5622
10.3168/jds.2013-7247
). One sample of each AA was analyzed for chemical composition using wet chemistry analysis (Cumberland Valley).
Seventy-two animals were included in this study: 23 in group BCAA, 25 in group BCAAPG, and 24 in CTRL. Parity distribution was as follows: 38 (52.8%) entered second lactation, 20 (27.8%) entered third lactation, 10 animals (13.9%) entered fourth lactation, and 4 animals (5.6%) entered fifth lactation. Cows in the beginning of the study received a 50% lower dose of leucine. To account for this difference and other changes associated with these 2 distinct time periods of the study (i.e., diet composition and ambient temperature), a period effect was included in the analysis.

Blood was taken from the coccygeal vessels after disinfection of the puncture site with 70% ethanol approximately 21 d before, as well as 7 and 28 d after calving into sterile evacuated glass tubes containing 143 USP units of freeze-dried sodium heparin (BD, Franklin Lakes, NJ) consistently at 1400 h. To prevent contamination of the blood sample and activation of immune cells by perforating the skin, at least one whole 10-mL vacutainer tube was filled to flush the needle and was used for a different purpose. Samples for PBMC separation were immediately placed on ice. For transport to the laboratory, 15 mL of anticoagulated blood was diluted 1:1 with PBS that contained phosphatase inhibitors 1 mM sodium orthovanadate, 10 mM sodium β-glycerophosphate, and 10 mM sodium fluoride. In the laboratory the sample was transferred into Leucosep tubes prefilled with 15 mL Histopaque-1077 (Sigma-Aldrich, St. Louis, MO) and centrifuged for 15 min at 1,000 × g and 17°C. The layer containing PBMC was transferred into 50-mL conical tubes and washed 3 times with ice-cold PBS containing the same phosphatase inhibitors as described above. For each sample, PBMC were enumerated using a hemocytometer (Leica, Wetzlar, Germany) with Trypan Blue (Sigma-Aldrich) exclusion staining at a dilution of 1:1. For glycogen analysis, aliquots of 107 cells were snap frozen in liquid nitrogen and stored at −80°C until processing. For immunoblotting, one aliquot of 107 PBMC was lysed in 250 µL of ice-cold lysis buffer containing 150 mM sodium chloride, 1% Triton X, 0.5% sodium deoxycholate, 0.1% sodium dodecyl sulfate, 50 mM Tris, and 1 mM phenylmethane sulfonyl fluoride with the addition of a protease and phosphatase inhibitor cocktail (Halt, Thermo Fisher Scientific, Waltham, MA).

Determination of Glycogen Concentration in PBMC

Glycogen content of PBMC was determined using a commercially available fluorometric assay (Glycogen assay kit, Cayman Chemical, Ann Arbor, MI). Aliquots of 107 PBMC were thawed by addition of 600 µL of ice-cold assay buffer. Samples were sonicated for 2 s on ice as described above, vortexed, and centrifuged at 800 × g for 10 min at 4°C. Samples were handled on ice until addition of assay reagents according to the manufacturer's instructions (www.caymanchem.com). Samples were assayed in duplicate. The interassay coefficient of variation calculated from pooled control samples included on all 5 plates used in this study was 6.9%. Results are presented as micrograms of glycogen/106 PBMC.

Heparinized whole blood was collected as described above with the difference that samples were kept at room temperature for transport to the laboratory. Blood samples were mixed by inversion and 2 mL was transferred into sterile, endotoxin-free culture tubes (VWR, Radnor, PA). Purified LPS from Escherichia coli O111:B4 was purchased from Millipore Sigma (Burlington, MA) and a stock solution of 1 mg/mL frozen in aliquots. Aliquots of the stock solution were thawed and diluted with RPMI 1640 cell-culture medium (Thermo Fisher Scientific). One tube per sample was stimulated at concentration of 10 ng of LPS/mL of blood in a total volume of 10 µL of LPS in RPMI/mL of blood. A second tube served as the unstimulated control with the addition of the medium used to dilute the LPS stock solution. The dose of 10 ng/mL of LPS for whole-blood stimulation was chosen as it is close to the neutralizing capacity of plasma and similar to the concentration of LPS found in septic patients (
Dedrick and Conlon, 1995
Prolonged expression of lipopolysaccharide (LPS)-induced inflammatory genes in whole blood requires continual exposure to LPS.
Infect. Immun. 1995; 63 (7890395): 1362-1368
).
Both tubes were incubated at 38°C for 2 h in a water bath. The reaction was stopped by placing tubes on ice, followed by centrifugation at 4°C for 10 min at 1,500 × g.

Differences in baseline characteristics of the study population were analyzed using Fisher's exact test for categorical variables (parity) and ANOVA for continuous outcomes (sampling day relative to calving, days dry). Concentration of glycogen, densitometry results of nonp4EBP1:4EBP1, pS6RP:S6RP, pAKT:AKT, as well as all gene expression data had to be log-transformed to achieve normality of residuals to satisfy the assumptions of the ANOVA. Leukocyte cytokine expression after stimulation was analyzed as the net increase in gene expression after subtracting the expression level before stimulation.
Repeated measures analysis was performed in Proc MIXED with the fixed effect of treatment group and sample time point, as well as their interaction. An unstructured covariance structure was chosen in all models. A fixed effect of study period as explained above was forced into every model. A treatment group × period interaction allowing for the identification of effects in the treatment groups alone compared with the control group (attributable to supplementation), as well as a treatment group × period × sample time point interaction were tested in all models and retained if P < 0.05. Outlier diagnostics were performed as defined a priori with the INFLUENCE statement and removed if Cook's distance exceeded 0.5. Differences in least squares means were controlled for multiple comparisons using Tukey's test. After each model fit, residuals were visually inspected for normality and homoscedasticity. All results are presented as geometric means and 95% CI unless otherwise stated.

We conclude that the signaling of the nutrient-sensing kinases AKT/mTOR and AMPK is altered in cows in the immediate postpartum period. The decrease in AKT/mTOR activation and the increase in AMPK phosphorylation are consistent with the state of nutrient deficit in the transition period. This was also demonstrated by a decrease in glycogen storage in bovine immune cells postpartum. Whole-blood leukocyte gene expression profiles changed concurrently, with greater cytokine gene expression at baseline and after stimulation of cells with LPS postpartum. The temporal association is intriguing as nutrient-sensing kinases have been implicated in moderating the inflammatory cytokine profile in other species, but the presence or absence of a causal relationship needs to be demonstrated in future studies that extend this work and experimentally alter the identified pathways.

This work was supported by the USDA National Institute of Food and Agriculture, Hatch project 1007477. Any opinions, findings, conclusions, or recommendations expressed in this publication are those of the authors and do not necessarily reflect the view of the National Institute of Food and Agriculture (NIFA) or the United States Department of Agriculture (USDA). The authors thank Charlene Ryan (Cornell University, Ithaca, NY) for her invaluable assistance with data collection. We also wish to thank the staff at the research dairy for the care of the animals sampled in this study and Balchem Corp. (New Hampton, NY) for rp-BCAA encapsulation.