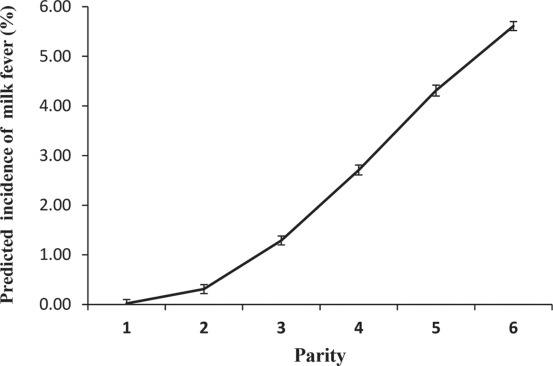 Additive genetic and heterosis effects for milk fever in a population of Jersey, Holstein × Jersey, and Holstein cattle under grazing conditions

The aim of this study was to estimate additive genetic and heterosis effects for milk fever (MF) in Costa Rican dairy cattle. A farm-based management information software was used to collect 223,783 parity records between years 1989 and 2016, from 64,008 cows, 2 breeds (Jersey, Holstein × Jersey crosses, and Holstein), and 134 herds. The pedigree file comprised 73,653 animals distributed across 10 generations. A total of 4,355 (1.95%) clinical cases of MF were reported within this population, affecting 3,469 (5.42%) cows. Data were analyzed using 2 animal models, both accounting for repeatability and assuming different distributions for MF event: normal (linear model) or binomial (threshold model). The models included parity as fixed effect, breed and heterosis as fixed regressions, and herd-year-season, additive genetic, and permanent environment as random effects. The models were fit using a generalized linear mixed model approach, as implemented in ASReml 4.0 software. We noted significant regression on the percentage of Holstein breed, depicting a −0.0086% [standard error (SE) = 0.0012] decrease in MF incidence for each 1-unit increase in percentage of Holstein breed. A favorable heterosis of 5.9% for MF was found, although this was not statistically significant. Heritability and repeatability were, respectively, 0.03 (SE = 0.002) and 0.05 (SE = 0.002) for the linear model, and 0.07 (SE = 0.007) and 0.07 (SE = 0.007) for the threshold model. The correlation between BLUP (all animals in pedigree) for linear and threshold models, was 0.89. The average accuracy of the estimated BLUP for all animals were 0.44 (standard deviation = 0.13) for the linear model and 0.29 (standard deviation = 0.14) for the threshold model. Heritability and repeatability for MF within this population was low, though significant.

A longitudinal observational study design was used to analyze health data regarding MF from records collected in the Veterinary Automated Management and Production Control Program software (
Noordhuizen and Buurman, 1984
VAMPP: A veterinary automated management and production control programme for dairy farms (The application of MUMPS for data processing).
Vet. Q. 1984; 6 (6547549): 66-72
10.1080/01652176.1984.9693914
) between 1989 and 2016. The study population consisted of 64,008 cows, 2 breeds (Holstein, Jersey, and Holstein × Jersey crosses) from 134 herds, with a total of 223,783 recorded parities along 10 generations of cows in pedigree in Costa Rica.
The follow-up period varied widely between herds, from a minimum of 3 yr to a maximum of 28 yr, with an average of 19.4 yr. To eliminate herds that did not register MF events on a regular basis, only those herds that reported at least 5 cases of MF were included in the study. A minimum of 5 cows within herd-year-season was also required. Consistency checks were performed on individual animal data regarding the logical sequence of reproductive events and genealogical records.
Cases of MF reported during the first 12 wk after calving were included in the analysis, although 75% of cases occurred immediately after calving and 90% within the first 3 wk after calving. For this study, we assumed that a reasonably accurate diagnosis of MF was made by herd managers based on symptomology, such as those mentioned by
Horst et al., 1997
Strategies for preventing milk fever in dairy cattle.
J. Dairy Sci. 1997; 80 (9241589): 1269-1280
10.3168/JDS.S0022-0302(97)76056-9
, as well as the time of development of symptoms relative to calving and response of the cow to treatment with intravenous calcium.

Several statistical and genetic models have been used in the analysis of categorical events, such as MF (
Gianola, 1980
Genetic evaluation of animals for traits with categorical responses.
J. Anim. Sci. 1980; 51 (7204271): 1272
10.2527/jas1981.5161272x
,
Gianola, 1982
Theory and analysis of threshold characters.
J. Anim. Sci. 1982; 54: 1079
10.2527/jas1982.5451079x
). The use of nonlinear mixed models based on threshold theory has been suggested a more appropriate alternative to linear models (
Gianola, 1982
Theory and analysis of threshold characters.
J. Anim. Sci. 1982; 54: 1079
10.2527/jas1982.5451079x
;
Gianola and Foulley, 1983
Sire evaluation for ordered categorical data with a threshold model.
Genet. Sel. Evol. 1983; 15 (22879123): 201-224
;
Kadarmideen et al., 2000
Linear and threshold model genetic parameters for disease, fertility and milk production in dairy cattle.
Anim. Sci. 2000; 71: 411-419
10.1017/S1357729800055338
). Threshold model is based in the postulate that the binomial response variable is indeed a subjacent continuous variable that takes a value of 1 if it exceeds a fixed threshold value and a value of 0 if it does not (
Heringstad et al., 2005
Genetic analysis of clinical mastitis, milk fever, ketosis, and retained placenta in three lactations of Norwegian Red Cows.
J. Dairy Sci. 2005; 88 (16107417): 3273-3281
10.3168/jds.S0022-0302(05)73010-1
).
Two statistical models were evaluated, defined as linear-animal model (LA) and threshold-animal model (TA). Linear and threshold are referred to the dependent variable (MF). For LA a normal distribution with identity link function was assumed, whereas for TA a binomial distribution with a probit link function was used. Equation 1 describes the effects included in both models:
[1]
where y = occurrence of milk fever event (recorded as: 0/1 = absent/present); μ = general mean; P = fixed effect of parity (6 classes, from 1 to ≥6); HYS = random effect of herd-year-season of calving, with season arranged in 3-mo length periods (9,699 classes); β1 × (% Hol) = linear regression on the percentage of Holstein breed, as Holstein (H) = 100%, Jersey (J) = 0%, 3/4H 1/4J = 75%, 1/2H 1/2J = 50%, and 1/4H 3/4J = 25%; β2 × (% het) = linear regression on the expected percentage of heterosis retained (
VanRaden, 1992
Accounting for inbreeding and crossbreeding in genetic evaluation of large populations.
J. Dairy Sci. 1992; 75: 3136-3144
10.3168/JDS.S0022-0302(92)78077-1
) according to breed type, as H = 0%, J = 0%, 3/4H 1/4J = 50%, 1/2H 1/2J = 100%, 1/4H 3/4J = 50%; a = random additive genetic effect linked to pedigree (n = 73,653); p = random permanent environment effect (n = 64,008); and ε = Random residual error, where is the residual variance. Herds practicing crossbreeding alternate purebred sires, therefore 1/2H 1/2J cows were all F1, and 3/4 to 1/4 cows were the result of backcrossing F1 to Holstein or Jersey. A few cows from further alternate crosses were initially present in the data set, but not used in this analysis. Both models were solved using generalized linear mixed models in ASReml software (
Gilmour et al., 2009
ASReml user guide. Release 3.0.
VSN International Ltd., Hemel Hempstead, UK2009
). This software uses penalized quasi-likelihood, which is based on Taylor's first order proximity series.
The Wald's conditional F test was used to infer about fixed effects, as this test estimates each fixed effect of the linear model maintaining marginality of relationships by the method of
Kenward and Roger, 1997
The precision of fixed effects estimates from restricted maximum likelihood.
Biometrics. 1997; 53 (9333350): 983-997
. In this way, an F test for the mean was also obtained by ignoring the fixed effect of parity.
Percentage of heterosis (% het) was calculated as in Equation [2] (
Bourdon, 1997
Understanding Animal Breeding.
Prentice Hall, Upper Saddle River, NJ1997
), which is self-explanatory:
[2]
Predicted incidences of MF by parity and for different combinations of breed and heterosis effects were obtained from the solutions of LA and TA models.
For estimation of heritability and repeatability, additive genetic variance was obtained directly from the animal variance component, whereas phenotypic variance was calculated as the sum of herd-year-season, animal, permanent environment, and residual variance components. For the linear model, residual variance was estimated directly from optimization algorithm, whereas for threshold model with probit link function, residual variance was fixed to a value of 1 (
Gilmour et al., 2009
ASReml user guide. Release 3.0.
VSN International Ltd., Hemel Hempstead, UK2009
).
Best linear unbiased predictors and corresponding standard errors for animals in the population were obtained from ASREML output. From these, accuracy estimates were calculated using Equation 3. To assess degree of agreement between genetic models, a correlation analysis between BLUP of all animals in pedigree for LA versus TA models was also performed:
[3]
where Reli = accuracy value for BLUP of ith animal; si = standard error reported for BLUP of ith animal; Fi = inbreeding coefficient of ith animal (
Bourdon, 1997
Understanding Animal Breeding.
Prentice Hall, Upper Saddle River, NJ1997
); and = genetic variance.

The linear regression on percentage of Holstein was highly significant (P < 0.001), whereas the linear regression on percentage of heterosis was not (Table 2). This provides support for the hypothesis of a breed effect partially controlling phenotype for MF occurrence. The predicted incidence of MF according to percentage of Holstein breed showed a well-defined trend of the additive genetic effect affecting risk of suffering MF (Figure 2). The linear model predicted a regression coefficient which indicates a −0.0086% (SE = 0.0016) decrease in MF incidence for each 1-unit increase in percentage of Holstein breed. Additive differences among breed categories were all significant (P < 0.05). Similar trends were obtained from the threshold model.
Previous studies suggested important differences for MF susceptibility between Holstein and Jersey (
Lean et al., 2006
Hypocalcemia in dairy cows: Meta-analysis and dietary cation anion difference theory revisited.
J. Dairy Sci. 2006; 89 (16428636): 669-684
10.3168/JDS.S0022-0302(06)72130-0
;
Roche and Berry, 2006
Periparturient climatic, animal, and management factors influencing the incidence of milk fever in grazing systems.
J. Dairy Sci. 2006; 89 (16772597): 2775-2783
10.3168/JDS.S0022-0302(06)72354-2
;
Saborío-Montero et al., 2017
Risk factors associated with milk fever occurrence in grazing dairy cattle.
J. Dairy Sci. 2017; 100 (28941816): 9715-9722
10.3168/jds.2017-13065
). The present study suggests that these differences are partially caused by additive genetic effects.
For heterosis, a negative (favorable) regression coefficient of magnitude −0.0014 (SE = 0.0013) was found for the linear model, which causes a deviation from breed effects equivalent to a 5.9% heterosis (Figure 2). Estimates from the threshold model also followed the same trend. This deviation, however, was not statistically significant. Suboptimal structure of the data set available may have contributed, to some extent, to the lack of significance for the heterosis effect, given the lower sample size available for crossbred categories and their highly unequal distribution among herds. This is considered relevant because, as far as we know, no other heterosis estimates for MF has been published before.

Heritability and Repeatability for Milk Fever

BLUP and Accuracy of EBV

The observed distribution of BLUP indicated that, indistinct from the genetic model, in this population considerably genetic variability for predisposition to MF exists; for instance, BLUP ranged from −0.06 to 0.14 (LA) and from −0.40 to 0.80 (TA, probit scale) for less- to more-susceptible animals for MF. The correlation between BLUP for all animals in the pedigree for TA and LA models was 0.89. These results suggest a strong association between BLUP, assuming different distributions within animal genetic models. The average accuracy of the estimated BLUP were 0.44 (SD = 0.13) for the linear animal model and 0.29 (SD = 0.14) for the animal threshold model.

Heritability and repeatability for MF were low though significant. We found breed differences partially controlling phenotype for MF occurrence. For heterosis, a favorable (not significant) effect was obtained. Genetic variation for predisposition to MF estimated in this study suggested that inclusion of MF in selection indexes might have positive effects on phenotypes of health related to peripartum diseases through genetic breeding programs. The use of LA or TA leads to a similar ranking of breeding values, which suggests that both models can be used for genetic evaluation of MF.

The authors acknowledge the Regional Informatics Center for Sustainable Animal Production (CRIPAS) of the Veterinary Medicine School, National University of Costa Rica for allowing us to use the data for this study.