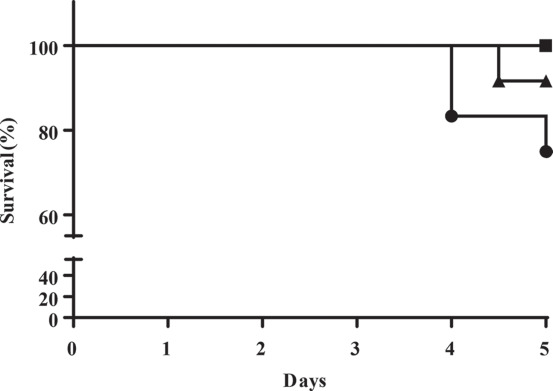 Doxorubicin (DOX), a powerful anthracycline antibiotic commonly used to treat a wide variety of cancers, is associated with the production of reactive oxygen species that cause oxidative damage, resulting in cardiac dysfunction. Components of dairy may have protective effects against DOX-induced cardiac damage. Kefir is a naturally fermented milk product containing antioxidants, probiotic bacteria, and yeast in addition to the protective components of dairy. We explored the effects of dietary milk and kefir on DOX-induced cardiotoxicity in rats. We used singly housed, 10-wk-old male Sprague Dawley rats assigned to 1 of 3 isocaloric diets, control (CON n = 24), milk (MLK, n = 24), or kefir (KEF, n = 24), with equivalent macronutrient profiles. After a 9-wk dietary intervention, all animals were given either a bolus injection (15 mg/kg) of DOX (CON-DOX n = 12; MLK-DOX n = 12, KEF-DOX n = 12) or saline (CON-SAL n = 12; MLK-SAL n = 12; KEF-SAL n = 12). Body weight, grip strength, echocardiographic evaluation of cardiac geometry, and cardiac function were evaluated using echocardiography at 5 d postinjection and data were analyzed using ANOVA. Survival at d 5 post-DOX injection was 92 and 100% in KEF-DOX and MLK-DOX, respectively, and 75% in CON-DOX. By the last week of the dietary intervention, and just before injection with saline or DOX, CON weighed significantly (14%) more than the MLK and KEF. The DOX treatment resulted in significant reductions in body weight; however, we found no diet × drug interactions. The DOX treatment reduced peak grip strength compared with SAL; when compared with pre-injection measures, MLK-DOX rats did not experience a significant reduction in peak grip strength compared with CON-DOX and SAL-DOX rats. Heart mass in MLK and KEF was significantly higher when compared with CON. In summary, 9 wk of milk or kefir ingestion resulted in lower body size and higher heart mass after DOX treatment. Additionally, MLK preserved peak grip strength after DOX treatment, whereas KEF or CON did not. We observed no consistent protective effects with respect to heart dimensions and function. These findings suggest that long-term milk or kefir ingestion may be helpful in optimizing health before and during doxorubicin treatment.

Cancer is one of the most prevalent diseases in humans today. Approximately 39.6% of men and women will be diagnosed with cancer at some point during their lifetime. Cancer treatment is becoming more effective, and the number of individuals living beyond cancer diagnosis has increased each year. By the year 2024, there will be approximately 19 million cancer survivors in the United States (
ACS (American Cancer Society), 2017
Cancer Statistics Fact Sheet.
https://www.cancer.org/research/cancer-facts-statistics/all-cancer-facts-figures/cancer-facts-figures-2017.html
Date: 2017
Date accessed: May 1, 2018
). Doxorubicin, an anthracycline antibiotic, is widely used as treatment for many cancers. Doxorubicin acts as an antitumor agent by intercalating DNA, thereby reducing cancer cell replication (
Yang et al., 2014
Doxorubicin, DNA torsion, and chromatin dynamics.
Biochim. Biophys. Acta. 2014; 1845: 84-89
); however, doxorubicin can also alter the health of other tissues when used as a chemotherapy drug, resulting in irreversible heart damage, immune function dysfunction, and disruption of the intestinal microbiome (
Pugazhendhi et al., 2018
Toxicity of doxorubicin (Dox) to different experimental organ systems.
Life Sci. 2018; 200 (29534993): 26-30
). In fact, recent studies using mice suggested that harmful changes in the myocardium can occur in as little as 2 wk after receiving what is considered a safe dose of 3 mg/kg per week of doxorubicin (
Desai et al., 2013
Development of doxorubicin-induced chronic cardiotoxicity in the B6C3F1 mouse model.
Toxicol. Appl. Pharmacol. 2013; 266 (23142469): 109-121
;
Piotrowska et al., 2017
Early transcriptional alteration of histone deacetylases in a murine model of doxorubicin-induced cardiomyopathy.
PLoS One. 2017; 12 (28662206): e0180571
). The development of acute doxorubicin cardiotoxicity occurs in approximately 11% of patients and has the potential to be reversible; however, chronic doxorubicin cardiotoxicity, although much less common, is associated with a significant increase in mortality (
Chatterjee et al., 2010
Doxorubicin cardiomyopathy.
Cardiology. 2010; 115 (20016174): 155-162
).
Although pharmacological treatments aimed at reducing doxorubicin-induced side effects, such as dexrazoxane, are used clinically, survivors often have to endure additional immunosuppressive side effects (
Langer, 2014
Dexrazoxane for the treatment of chemotherapy-related side effects.
Cancer Manag. Res. 2014; 6 (25246808): 357-363
). Consequently, the incorporation of foods including dairy products presents an attractive intervention option. In fact, whey protein is protective against doxorubicin-induced cardiotoxicity (
Alexieva et al., 2014
Whey protein concentrate as a protective agent against doxorubicin-induced cardiotoxicity in mice.
Biotechnol. Biotechnol. Equip. 2014; 23: 493-497
). The probiotic component of many dairy foods presents a unique opportunity to mitigate doxorubicin-induced side effects. Recent animal studies show that consumption of probiotics may have powerful anticytotoxic effects (
Sharma et al., 2011
Modulation of Bax/Bcl-2 and caspases by probiotics during acetaminophen induced apoptosis in primary hepatocytes.
Food Chem. Toxicol. 2011; 49 (21130831): 770-779
), and that a diet with a yogurt component can improve membrane integrity and cardiac contractility in a rat model of doxorubicin-induced cardiomyopathy (
Abu-Elsaad et al., 2015
Yogurt containing the probacteria Lactobacillus acidophilus combined with natural antioxidants mitigates doxorubicin-induced cardiomyopathy in rats.
J. Med. Food. 2015; 18 (25590792): 950-959
).
Despite these promising results, many cancer survivors develop a sensitivity to lactose and avoid dairy products during and after treatment (
Osterlund et al., 2004
Lactose intolerance associated with adjuvant 5-fluorouracil-based chemotherapy for colorectal cancer.
Clin. Gastroenterol. Hepatol. 2004; 2 (15290663): 696-703
). Kefir is a fermented milk product that contains a mixed microbial culture of lactic acid bacteria and yeasts. Kefir traditionally contains significantly less lactose than milk, and regular kefir consumption has been shown to improve lactose digestion and tolerance in adults (
Hertzler and Clancy, 2003
Kefir improves lactose digestion and tolerance in adults with lactose maldigestion.
J. Am. Diet. Assoc. 2003; 103 (12728216): 582-587
). Although this beverage has been used extensively in the Middle East, Russia, and eastern Europe for thousands of years (
Farnworth, 2015
Kefir: From folklore to reglatory approval.
J. Nutraceuticals Funct. Med. Foods. 2015; 1: 48-68
10.1300/J133v01n04_05
), exploration of the health benefits of kefir today is scarce (
Ahmed et al., 2013
Kefir and health: A contemporary perspective.
Crit. Rev. Food Sci. Nutr. 2013; 53 (23391011): 422-434
). In addition to the health effects derived directly from bacteria and probiotics, kefir also contains naturally occurring metabolic by-products of bacteria and yeast fermentation, including biologically active peptides, exopolysaccharides, and organic acids that are also thought to play important roles in the protective effects and immune system regulation (
Garofalo et al., 2015
Bacteria and yeast microbiota in milk kefir grains from different Italian regions.
Food Microbiol. 2015; 49 (25846922): 123-133
). To date, no study has explored the effects of kefir on doxorubicin-induced side effects.
Given the significant adverse side effects associated with doxorubicin and the potential health benefits of milk and kefir, the use of milk or kefir before and during doxorubicin treatment may be an attractive dietary intervention for individuals anticipating or receiving cancer treatment. Consequently, the purpose of our study was to explore whether daily ingestion of milk or kefir would help improve survival and protect against doxorubicin-induced changes in BW, grip strength, and in vivo cardiac muscle size and function.

Male, 10-wk-old Sprague Dawley rats (n = 72; Envigo, Indianapolis, IN) were assigned to 1 of 3 diet groups and given one of the following liquid rodent diets for 9 wk: standard rodent liquid diet (CON; Teklad, Harland, Madison WI); standard rodent liquid diet and reduced-fat milk (MLK); or standard rodent diet and reduced-fat kefir (KEF). It is important to note that at the beginning of the study, we randomized rats into 2 groups (MLK and KEF). After obtaining additional funds and after the kefir and milk dietary interventions were underway, the third, nondairy, liquid control diet group was incorporated into the study. The CON rats were purchased from the same company and were exactly the same age at the start of the dietary intervention. It is important to note that all CON animals were not part of the randomization of the animals to KEF and MLK groups. All animals were single housed in an environmentally controlled facility on a 12:12 photoperiod cycle with food and water provided ad libitum. Diets were isocaloric and contained the same macro- and micronutrient content (Table 1). Low-fat cow milk was obtained from Whole Foods (Baton Rouge, LA). Kefir was produced at the Louisiana State University Creamery using low-fat, pasteurized, nonhomogenized cow milk (Whole Foods) that was fermented in gallon-sized, lidded glass containers by inoculation with 30 g of kefir grains (Cultures for Health, Sioux Falls, SD) per 3.78 L (1 gallon) of milk. The kefir grains were contained in unbleached cotton tea bags, which were sterilized in boiling water before addition of the kefir grains. The milk was allowed to ferment at 25°C for approximately 24 h or until a pH of 4.6 was obtained. The milk and kefir were then placed in refrigerated storage and shipped on ice, overnight to the University of Northern Colorado. The control, milk, and kefir liquid diets were prepared daily at the University of Northern Colorado and provided to the animals every 12 h via sipper tube. All procedures were approved by the Institutional Animal Care and Use Committee.
Table 1Nutrient composition of complete liquid diets
1
Values are per 1,000 mL of control (CON), milk (MLK), and kefir (KEF) diets.
1 Values are per 1,000 mL of control (CON), milk (MLK), and kefir (KEF) diets.

After the 9-wk dietary intervention period, animals received an intraperitoneal injection of either saline (SAL) or 15 mg/kg of doxorubicin (DOX), resulting in the following treatment groups: CON-SAL, CON-DOX, MLK-SAL, MLK-DOX, KEF-SAL, and KEF-DOX. Animals remained on their respective diets for the following 5 d postinjection. Animal survival was monitored throughout this period, and on d 5 postinjection we evaluated BW, grip strength, and cardiac function. Each animal was then anesthetized with an i.p. injection of heparinized sodium pentobarbital. When the tail pinch reaction was absent, the heart was excised and weighed immediately.

Skeletal muscle function in the whole animal was assessed for all animals using a grip strength meter designed for use with rats (Columbus Instruments, Columbus, OH). Each rat was held over the pull bar until it grabbed the pull bar. The animal was then pulled gently and steadily in a straight horizontal line away from the meter until the animal released the pull bar. The meter then displayed the highest force applied, which was then recorded. The animal was returned to its cage for 5 min until the next test. Each animal was tested 5 times per session with the same handler, and the highest force achieved was used as the animal's peak grip strength.

Rats were sedated with isoflurane and in vivo cardiac function evaluation was performed using transthoracic echocardiography (Toshiba Nemio 30:10 MHz pediatric transducer; Toshiba, Tokyo, Japan). An M-mode image of the left ventricle was used to calculate left ventricular septal and posterior wall thicknesses at the end systole and diastole and left ventricular end-systolic and end-diastolic diameter. Mitral and aortic valve blood flow profiles (including maximal and mean blood flow velocities) were also obtained using pulsed wave Doppler images. Both M-mode and Doppler data were obtained from 3 consecutive cardiac cycles and averaged for each animal. All cardiac dimension and function evaluations were performed by a single researcher blinded to the treatments groups.

A Kaplan-Meier analysis was used to evaluate survival curves. The effects of the diet and drug were explored with a 3 (diet; CON, MLK, KEF) × 2 (drug; SAL, DOX) ANOVA (JMP version 12, SAS Institute Inc., Cary, NC). Changes in BW and grip strength between the preinjection and 5-d postinjection measures were identified using a 3 (diet) × 2 (drug) by time (repeated measures pre- to postinjection) ANOVA (JMP). When a significant F-value was observed in diet, drug, and diet by drug interaction, a Tukey test was used post hoc to identify specific group differences. All results are presented as mean ± standard deviation. Significance was set at the α = 0.05 level.

Animals treated with SAL had peak grip strengths (16.2 ± 1.6 N) that were 11% higher than those treated with DOX (14.4 ± 1.9 N; Figure 3a). When comparing preinjection to 5-d postinjection measures, both CON-DOX (P = 0.005) and KEF-DOX (P = 0.0028) experienced significant decreases in peak grip strength, whereas we found no significant changes in MLK-DOX and all SAL-treated groups.