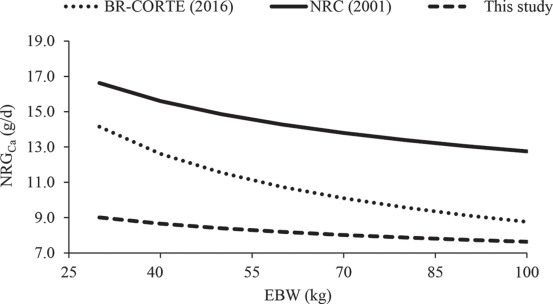 International committees that have published nutrient requirements for dairy cattle have used data from mineral studies conducted in the 1920s to 1970s, and no study has reported data from animals less than 100 kg; therefore, there is a need to update mineral requirements for preweaned dairy calves. Thus, a meta-analysis was performed to estimate the mineral requirements of Ca, P, K, Mg, and Na for Holstein and Holstein × Gyr crossbred preweaned dairy calves using data from 5 studies developed at the Universidade Federal de Viçosa (Viçosa, MG, Brazil). A total of 210 calves were separated into 2 breeds: purebred Holstein calves (animals with a Holstein pedigree higher than 87.5%) and Holstein × Gyr crossbred calves (animals with a Holstein pedigree lower than 87.5%). The comparative slaughter technique was used to estimate animal body composition and empty body weight (EBW). Mineral requirements for maintenance were estimated by the regression between retained mineral and mineral intake, whereas mineral requirements for gain were obtained from the first derivative of the mineral content in the animal's body. In addition, breed effect was tested on the intercept and slope of the models. The effect of breed was not observed for all analyzed variables. Thus, net requirements for maintenance were 12.73, 11.81, 20.28, 3.50, and 6.37 mg/kg of EBW per day for Ca, P, K, Mg, and Na, respectively. Retention coefficients were 73.18, 65.20, 13.16, 29.55, and 24.28% for Ca, P, K, Mg, and Na, respectively. The following equations were determined to estimate net requirements for gain (NRG, g/d): NRG for Ca = 14.402 × EBW−0.139 × empty body gain (EBG); NRG for P = 5.849 × EBW−0.027 × EBG; NRG for K = 1.140 × EBW−0.048 × EBG; NRG for Mg = 0.603 × EBW−0.036 × EBG; and NRG for Na = 1.508 × EBW−0.045 × EBG. Due to the high variation between the data found in this study and in the available literature, we suggest that further studies should be conducted to evaluate the estimates of this study.

This study was not submitted to the Ethics Committee of Animal Care and Use because we used only data from studies that were previously conducted. However, all individual studies followed the appropriate guidelines for animal care and use.

For all studies, the comparative slaughter technique was used to estimate body composition of each animal. Briefly, a group of animals (baseline group) were slaughtered at the beginning of the experiment to estimate initial EBW and initial mineral composition of the animals that remained in the studies. From the 210 animals, 30 animals were assigned to the baseline group. Before slaughter, all animals were allowed water for 16 h to obtain the shrunk BW (SBW). At the end of the trials, all animals were then slaughtered via captive bolt stunning followed by exsanguination. After exsanguination, the digesta was removed and discarded. The heart, lungs, liver, spleen, kidneys, fat around the kidney, pelvis, diaphragm, mesentery, tails, trimmings, and washed gastrointestinal tract were weighed. These values were added to the other portions of the body (i.e., carcasses, head, hide, limbs, and blood) to determine the EBW.
The rumen, reticulum, omasum, abomasum, small and large intestines, mesentery, liver, heart, kidneys, lung, tongue, spleen, diaphragm, esophagus, trachea, and reproductive tract were homogenized in an industrial grinder (model B5K326AG204; RefereInox, Chapecó, SC, Brazil) for 20 min. After removing the hide, the head and limbs were also ground in a bone crusher (model TOL10, Luiz Nasciutti SA Industry and Trade, Araguari, MG, Brazil) for 20 min.
The hide was sampled in 2 parts to represent the shoulder, 3 parts to represent the dorsal line, 2 parts to represent the ventral line, 2 parts to represent the rear, 1 part to represent each foot, and 1 part to represent the head, which altogether represented the entire hide. A composite sample of noncarcass components was constructed in which blood, head, limbs, hide, organs, and viscera were sampled based on the relative proportions of each component after summing all weights of the components.
After slaughter, the carcasses of each animal were split into 2 half carcasses, which were chilled at 4°C for 18 h. After the 18-h period, all cooled half carcasses were weighed and the right half carcass was ground (model TOL10, Luiz Nasciutti SA Industry and Trade) for 20 min in an industrial grinder (the carcass components samples). The noncarcass and carcass samples were lyophilized (Liotop L510/220V, Liotop, São Carlos, SP, Brazil) and ground in a ball mill for mineral analyses.

The parameters of the linear models were estimated using the MIXED procedure of SAS (version 9.3; SAS Institute Inc., Cary, NC). As the data comprised observations from different studies, it was necessary to quantify the variance associated with each of the studies. Therefore, each experiment was considered as a random sample of a large population and the data were analyzed following the technique described by
St-Pierre, 2001
Invited review: Integrating quantitative findings from multiple studies using mixed model methodology.
J. Dairy Sci. 2001; 84 (11352149): 741-755
10.3168/jds.S0022-0302(01)74530-4
for meta-analysis. The breed effect was tested on the intercept and slope of each model (Equations 1 to 4), and differences were declared when P < 0.05. Observations with residues higher than |2.5| were considered outliers and excluded from the database. From the total, 9, 9, 11, 15, and 8 animals were removed for Ca, K, P, Mg, and Na analysis, respectively.

The effect of breed was not observed on net requirements for maintenance and gain or on the predicted RC (P > 0.05). Consequently, dietary mineral requirements were considered similar for both breeds. Similarly, a breed effect was not observed on BW, ADG, MI, RM, and final body mineral content (P > 0.05; Table 1). The effect of breed might not have been observed because the study used similar diets, management, and climate conditions and the same methodology for estimating MI and RM and for mineral analysis. We suspect that these effects are more likely to affect macromineral requirements (
Underwood, 1981
The Mineral Nutrition of Livestock.
3rd ed. Academic Press, London, UK1981
) compared with breed effects. However,
BR-CORTE, 2016
Nutrient Requirements of Zebu and Crossbred Cattle.
2nd ed. Library of Universidade Federal de Viçosa, Viçosa, MG, Brazil2016
reported differences in mineral requirements for gain of different beef cattle breeds with an average BW of 315 kg. It is likely that mineral requirement differences might be expressed in other phases of gain but not in preweaned dairy calves. Therefore, it is consistent to recommend the estimates obtained in this study for both breeds (Holstein and Holstein × Gyr) in preweaned dairy calves up to 100 kg of BW.

The RC of P obtained in this study was 65.2% (Table 3). According to
NRC, 2001
Nutrients Requirements of Dairy Cattle.
7th rev. ed. National Academy Press, Washington, DC2001
, the recommended P absorption coefficient for calves consuming only milk is 90%. For animals with BW between 100 and 200 kg, the value suggested by this council was 78%.
AFRC (Agricultural and Food Research Council), 1991
Technical committee on responses to nutrients: Report 6. A reappraisal of the calcium and phosphorus requirements of sheep and cattle.
Nutr. Abstr. Rev. 1991; 61: 576-612
and
Gueguen et al., 1989
Mineral requirements.
in: Jarrige R. Ruminant Nutrition: Recommended Allowances and Feed Tables. Institut National de la Recherche Agronomique, London, UK1989: 49-56
recommended absorption coefficients of 58 and 60%, respectively. It should be highlighted that these studies considered only absorption coefficient and neglected urinary P excretion, which might lead to a bias in the overall estimate (excretion of this mineral through the urine can reach 4.33% of P intake;
Costa e Silva et al., 2015
Macrominerals and trace element requirements for beef cattle.
PLoS One. 2015; 10 (26657049): e0144464
10.1371/journal.pone.0144464
). The
BR-CORTE, 2016
Nutrient Requirements of Zebu and Crossbred Cattle.
2nd ed. Library of Universidade Federal de Viçosa, Viçosa, MG, Brazil2016
council recommends an RC of 68%, which is close to that reported in this study. Thus, urinary P losses should not be neglected, and we suggest an RC value of 65.2% for Holstein and Holstein × Gyr preweaning dairy calves.