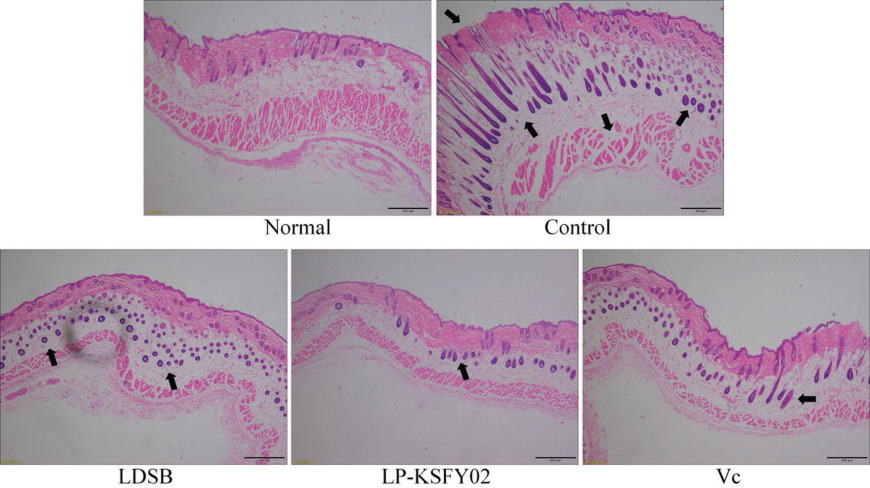 Xinjiang is located in the Eurasian hinterland and is the largest provincial administrative region in China's land mass. Being distant from the ocean, Xinjiang has a distinct temperate continental climate. Yogurt from Xinjiang, China, is a naturally fermented dairy product that is popular among the Uighurs indigenous to the region and has been consumed by local people as a homemade beverage for more than 10 centuries (
Xing et al., 2016
Occurrence of perfluorooctanoic acid and perfluorooctane sulfonate in milk and yogurt and their risk assessment..
Int. J. Environ. Res. Public Health. 2016; 13 (27775680): 1037
). Xinjiang yogurt exhibits a considerably higher nutritional value than fresh cow or sheep milk and it contains various compounds, including lactic acid, lactose, amino acids, minerals, vitamins, and enzymes. The proteins contained in Xinjiang yogurt possess a higher physiological value than those in rice, white flour, and meat (
He et al., 2015
Screening of lactic acid bacteria with high protease and lipase activities from Xinjiang traditional yogurt..
Food Science. 2015; 36: 130-133
). The probiotics in Xinjiang yogurt enhance immunity by regulating intestinal flora, affect the health of other organs, and have digestion-promoting effects and a preventive effect on hypertension and coronary heart disease (
Sun et al., 2006
Isolation and identification of lactic acid bacteria in Hogormag, a traditional fermented camel milk product..
Zhongguo Rupin Gongye. 2006; 34: 4-7
). The whey contained in the yogurt can suppress cholesterol levels and provide health benefits (antioxidant and hypolipidemic effects). Naturally fermented Xinjiang yogurt contains abundant natural lactic acid bacteria (LAB), which play a key role in formation of the yogurt flavor and quality (
Zhao et al., 2012
The development of yogurt with cholesterol-lowering effects..
J. Chin. Inst. Food Sci. Technol. 2012; 12: 53-59
). Lactic acid bacteria are also probiotics, with numerous physiological activities for human health (
Tuo and Yu, 2012
Advance of ethanol-induced gastric mucosa injury..
J. Chin. Inst. Food Sci. Technol. 2012; 12: 161-166
;
Yang et al., 2015
Screening, identification and microflora analysis of Lactic acid bacteria from Xinjiang traditional yogurts..
Sci. Technol. Food Ind. 2015; 36: 324-327
).
Studies have confirmed that LAB perform many important physiological functions in the human body, including maintaining the balance of human microecology. They can improve food digestibility and utilization rates in the gastrointestinal tract, reduce serum cholesterol levels, control toxins in the body, inhibit the growth and reproduction of spoilage bacteria and the generation of spoilage products in the intestines, produce nutrients, and stimulate tissue development. Thus, LAB affect nutritional status, physiological function, cellular infection, drug effects, toxic reactions, immune responses, tumorigenesis, and other emergency responses in the body (
Chen et al., 2017
Prevent effects of Lactobacillus fermentum HY01 on dextran sulfate sodium-induced colitis in mice..
Nutrients. 2017; 9 (28587089): 545
,
Chen et al., 2018b
Hepatoprotective effects of Lactobacillus on carbon tetrachloride-induced acute liver injury in mice..
Int. J. Mol. Sci. 2018; 19 (30060611): 2212
;
Wei et al., 2018
Identification of dominant lactic acid bacteria isolated from different fermented milk in Xinjiang of China..
Appl. Sci. (Basel). 2018; 8: 363
). In particular, Lactobacillus spp. in yogurt can inhibit and eliminate spoilage bacteria, such as Salmonella typhi, Shigella flexneri, and Staphylococcus spp., in the intestines and thereby help improve distribution of the intestinal flora, inhibit toxin production by spoilage bacteria, enhance intestinal function, promote nutrient absorption, and prevent premature aging (
Chen et al., 2018b
Hepatoprotective effects of Lactobacillus on carbon tetrachloride-induced acute liver injury in mice..
Int. J. Mol. Sci. 2018; 19 (30060611): 2212
). A decrease in the number of LAB in the body can affect health. Based on their special physiological activities, LAB have been widely used in food, medicine, and other fields (
Chen et al., 2017
Prevent effects of Lactobacillus fermentum HY01 on dextran sulfate sodium-induced colitis in mice..
Nutrients. 2017; 9 (28587089): 545
,
Chen et al., 2018a
Effects of Lactobacillus on mice with diabetes induced by high-fat diet with streptozotocin (STZ)..
Appl. Sci. (Basel). 2018; 8: 1249
,
Chen et al., 2018b
Hepatoprotective effects of Lactobacillus on carbon tetrachloride-induced acute liver injury in mice..
Int. J. Mol. Sci. 2018; 19 (30060611): 2212
).
Aging is a spontaneous and inevitable process in living organisms, which gradually show signs of decline in function, adaptability, and immunity. Aging is closely related to numerous diseases, including hypertension, type 2 diabetes, atherosclerosis, and senile dementia, which can be alleviated by delaying aging (
Buford, 2016
Hypertension and aging..
Ageing Res. Rev. 2016; 26 (26835847): 96-111
;
Kitada et al., 2016
The protective role of Sirt1 in vascular tissue: Its relationship to vascular aging and atherosclerosis..
Aging (Albany NY). 2016; 8 (27744418): 2290-2307
;
Chard et al., 2017
Successful aging among African American older adults with type 2 diabetes..
J. Gerontol. B Psychol. Sci. Soc. Sci. 2017; 72 (27655950): 319-327
). Currently, d-galactose is recognized as an aging-inducing agent, and aging animal models constructed using d-galactose are similar to the natural aging process. A small amount of d-galactose in the normal body can be converted into glucose, which participates in metabolism, whereas a large amount of d-galactose causes cell metabolic disorder and changes oxidase activity in tissue cells. These effects subsequently generate large numbers of superoxide anions and oxidation products, the latter of which lead to structural and functional damage of biological macromolecules and ultimately to cellular aging (
Li et al., 2016
Moderate exercise prevents neurodegeneration in D-galactose-induced aging mice..
Neural Regen. Res. 2016; 11 (27335566): 807-815
). Antioxidant substances whose antioxidant and anti-aging effects have been verified through the oxidative aging model established by d-galactose have been applied for development of antioxidant and anti-aging health products.
In this study, a new strain of LAB was isolated from yogurt from Xinjiang, China, and named Lactobacillus plantarum KSFY02. We administered the strain to mice following d-galactose–induced oxidative aging and determined its preventive effect on oxidative aging by analyzing mouse serum and tissues to lay the theoretical basis for further in-depth human research and industrial development.

Kunming mice are a type of outbred mice derived from Swiss mice. After feeding and adaptation to the environment for 1 wk, fifty 6-wk-old specific-pathogen-free (SPF) Kunming mice (25 males and 25 females) were purchased from Chongqing Medical University (Chongqing, China) and evenly divided into the following 5 groups: normal (healthy) group, control (oxidative aging) group, L. delbrueckii ssp. bulgaricus gavage group (LDSB group), L. plantarum KSFY02 gavage group (LP-KSFY02), and vitamin C gavage group (Vc). Each group included 10 mice (5 males and 5 females). During the first 4 wk, no treatment was administered in the normal and control groups. The mice in the LDSB and LP-KSFY02 groups were administered LDSB and LP-KSFY02, respectively, at a concentration of 1.0 × 109 cfu/kg of BW daily by gavage. The mice in the Vc group were administered vitamin C at a concentration of 200 mg/kg of BW daily by gavage. After 4 wk, the mice in the control, LDSB, LP-KSFY02, and Vc groups were intraperitoneally injected with d-galactose (120 mg/kg of BW) for 6 wk. During the d-galactose injections, the mice in the LB, LP-KSFY02, and Vc groups continued to be administered LB, LP-KSFY02, and Vc, respectively, at the previous concentrations by gavage for 6 wk. Subsequently, all mice were fasted for 24 h and then killed by cervical dislocation (
Tang and He, 2013
Treatment of D-galactose induced mouse aging with Lycium barbarum polysaccharides and its mechanism study..
Afr. J. Tradit. Complement. Altern. Med. 2013; 10 (24146495): 12-17
;
Khan et al., 2017
Molecular and physiological manifestations and measurement of aging in humans..
Aging Cell. 2017; 16 (28544158): 624-633
). Cardiac blood and liver samples were collected for subsequent experiments. The thymic, cerebral, cardiac, liver, spleen, and kidney indices were determined; organ index was calculated as the organ mass (g)/mouse body mass (kg) × 100. The study was approved by the Ethics Committee of Chongqing Medical University (no. SYXK 2018-0003).

Mouse skin, liver, and spleen tissues, each with an area of approximately 0.5 cm2, were collected and fixed in 10% formalin solution for 48 h. The tissues were dehydrated, cleared, embedded in wax, and cut, followed by hematoxylin and eosin (H&E) staining. Morphological changes in the tissues were examined under a light microscope (BX43, Olympus, Tokyo, Japan).

The results of serum and tissue measurements were the averages of 3 independent experiments. The SAS statistical software (version 9.1; SAS Institute Inc., Cary, NC) was used for data analysis, and one-way ANOVA was used to determine statistical significance.

Levels of NO and MDA and Activities of SOD, GSH-Px, and GSH

The skin from the d-galactose–induced aging model mice was observed under a light microscope, as shown in Figure 1. The epidermis structure of the normal (untreated) group was clear and intact, the collagen fiber content in the dermis was high, the boundary between the dermis and epidermis was clear, and the number of lipid vacuoles was normal. Compared with mice of the normal group, mice in the control group had a decreased collagen fiber content and increased numbers of lipid vacuoles, with endosmosis occurring in the dermis and a blurred boundary between the dermis and epidermis. Compared with mice of the control group, mice in the Vc, LDSB, and LP-KSFY02 groups had fewer lipid vacuoles, effectively alleviated endosmosis, and an apparent boundary between the epidermis and dermis. The results showed that LDSB and LP-KSFY02 alleviated skin lesions in the d-galactose–induced aging mice. Mice in the LP-KSFY02 group closer to the normal mice than those in LDSB and Vc groups, and thus the efficacy of LP-KSFY02 in preventing skin lesions was better.
Histopathological slices of liver were observed under a microscope, as shown in Figure 2. In the normal group, mouse liver cells showed an orderly arrangement and a regular shape, the size of the liver cells was consistent, the staining was uniform, and no aggregation of inflammatory cells and no obvious lesions were observed. In the control group, the mouse liver cells exhibited a disorderly arrangement with an irregular shape; the boundary appeared blurred, the cells became swollen, and inflammatory infiltration occurred in a large number of cells. Compared with those of the control group, the abnormalities in liver cells from the LDSB, LP-KSFY02, and Vc groups were alleviated to different extents. In particular, in the LP-KSFY02 group, the liver cells were generally orderly arranged, the hepatic cords were relatively regularly arranged, cell infiltration occurred occasionally, the nuclear structure was relatively clear, and the liver cell morphology was closest to that of the normal group. The results showed that LP-KSFY02 alleviated the d-galactose–induced pathological changes in the liver of model aging mice and that the efficacy of LP-KSFY02 was better than that of LDSB or Vc.
Histopathological slices of spleen from the normal group and groups treated with d-galactose are shown in Figure 3. The spleen structure of the normal group was clear and intact, the corticomedullary zone was clear, and the cells were arranged in an orderly manner. In comparison, in the control group, the spleen structure disappeared, the shape was irregular, the red pulp sinus was dilated and filled with a large number of red blood cells, the number of white pulp lymphocytes was reduced, the red pulp cord was narrowed, and the cells were arranged sparsely. In mice treated with LDSB, LP-KSFY02, or Vc, the splenic lesions were comparable with those of the control group. The morphological structure of the spleen was significantly improved, the boundary between the red pulp and white pulp was relatively clear, the germinal center was relatively distinct, and the cells were uniformly arranged; the effect of oxidative aging on the splenic lesions was lowest after LP-KSFY02 treatment. Treatment with LDSB, LP-KSFY02, and Vc can alleviate the spleen tissue lesions in d-galactose–induced oxidative aging model mice. Treatments LDSB and Vc had relatively good efficacies, but LP-KSFY02 showed the best efficacy, with the mouse spleen after LP-KSFY02 treatment being similar to that of mice in the normal group.

This research was supported by the Program for Innovation Team Building at Institutions of Higher Education in Chongqing (CXTDX201601040) and the Research Project of Chongqing University of Education (KY2015TBZC), China.