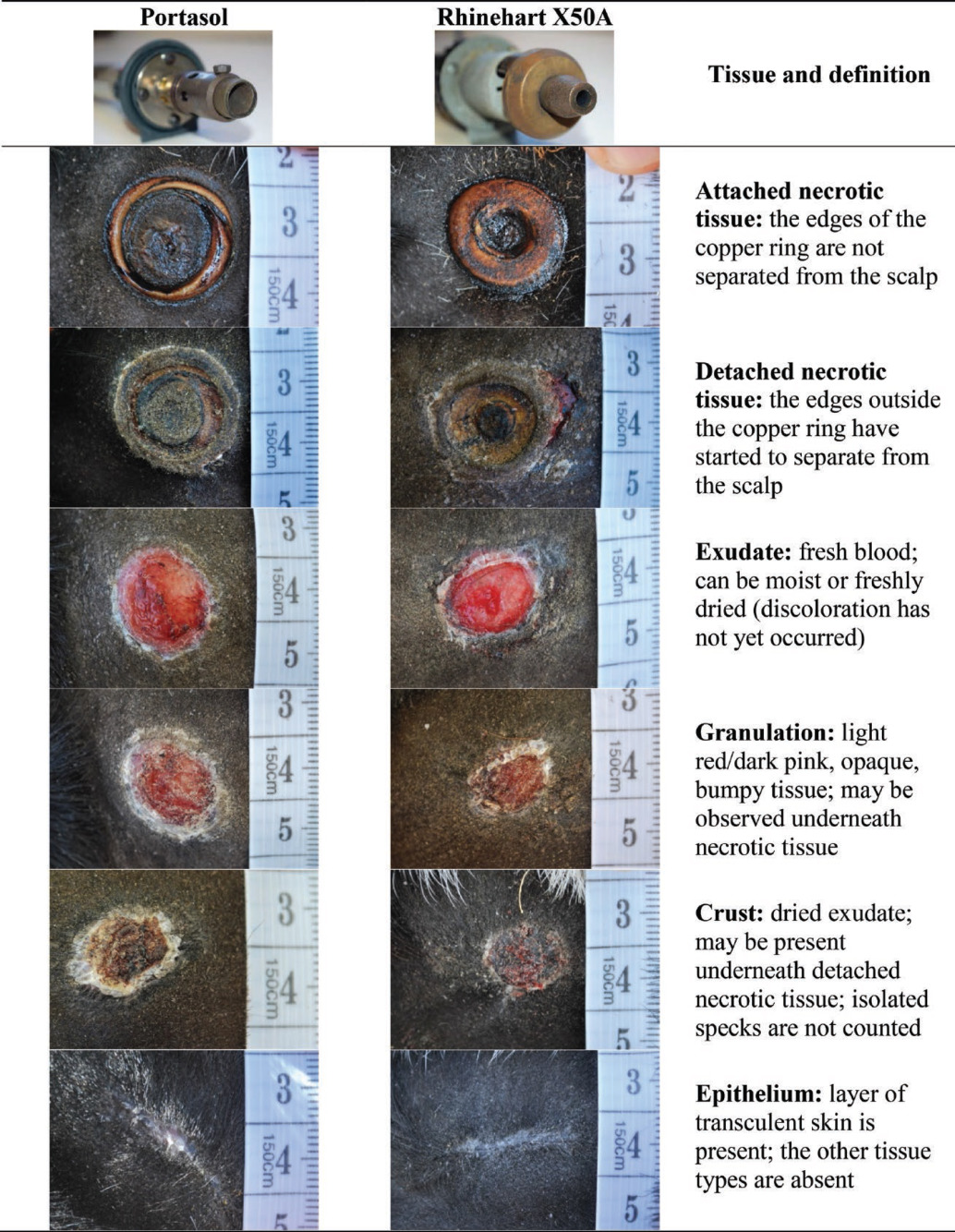 Hot-iron disbudding, the process of cauterizing the horn buds of calves or goat kids at an early age to prevent horn growth, is routinely practiced in dairy production. The wounds take weeks to heal and are painful to touch throughout this time. Possible strategies to hasten the healing of disbudding wounds are not well understood, but the type of iron used may be an important factor to consider. When evaluating strategies to hasten healing, a within-subjects design may be preferable, but laterality effects might act as a potential source of variation and confounding in this type of experiment. Our objectives were to compare healing after disbudding with 2 commercially available irons, and to determine whether wounds healed differently on the left versus the right side of the head. Ten Holstein calves 4 to 10 d of age were disbudded using the Rhinehart X50A electric disbudder (Rhinehart Development Corp., Spencerville, IN) on one horn bud and the Portasol gas disbudder (Portasol USA, Elmira, OR) on the other; side (left vs. right) was balanced between treatments. We scored wounds daily for the presence of 6 tissue types: attached necrotic tissue, detached necrotic tissue, exudate, granulation, crust, and epithelium. Surface temperature and size of the wound were measured twice-weekly using thermal and digital photographs, respectively. The type of iron used did not affect latency to re-epithelialize, which took on average (mean ± standard deviation) 53 ± 3 d and 55 ± 3 d for Portasol and Rhinehart wounds, respectively (range: 40–70 d). However, compared with Portasol wounds, those from the Rhinehart had fewer days of granulation tissue and tended to have more days of detached necrotic tissue. The Portasol tip had a smaller total surface area than the Rhinehart, which may have resulted in a less severe burn, causing the necrotic tissue to fall off sooner. The left side tended to re-epithelialize faster than the right side (mean ± standard error: left 51 ± 3 d; right 57 ± 3 d) and have fewer days of crust. Left-sided wounds were also cooler and tended to be smaller than those on the right. To assess the external validity of these laterality effects in our primary experiment (experiment A), we analyzed wound healing data from 2 other disbudding studies, one on calves (experiment B) and one on goat kids (experiment C). We observed laterality effects in the opposite direction in Experiment B, but negligible effects in experiment C, indicating that the differences in laterality had low external validity; the biological meaning of this asymmetry is unclear. Nonetheless, if using a within-subjects design, asymmetries in wound healing should be considered to avoid confounding effects. In conclusion, wounds from both irons took 7 to 8 wk to heal, on average; other strategies to accelerate healing should be explored.

This study was carried out at the University of California-Davis Dairy Facility from November 2016 to May 2017. This facility was chosen due to its proximity to the researchers, which made it possible to collect data daily throughout the study. All procedures were approved by the University of California, Davis, Institutional Animal Care and Use Committee (protocol no. 19204).

Calves were disbudded at 4 to 10 d of age (mean BW ± SD: 41 ± 2 kg) using a Rhinehart X50A on one horn bud and a Portasol on the other. We chose this age to maximize data collection when calves were housed individually rather than in groups. The side (left vs. right) that each iron was applied to was alternated and balanced between calves. On the day of disbudding, the calf was restrained in a head device in her home pen (
Jimenez et al., 2019
Acute pain responses in dairy calves undergoing cornual nerve blocks with or without topical anesthetic.
J. Dairy Sci. 2019; 102: 3431-3438
10.3168/jds.2018-15445
) and a 5 × 5 cm patch was clipped on each side of the head to locate the horn bud. The calf received a cornual nerve block of 5 mL 2% lidocaine hydrochloride injected on each side with a 20-gauge × 25-mm needle. If the horn bud was not numb after 10 min (as assessed by a pin prick), an additional 2 mL was given, which always sufficed. Each iron was placed on the respective horn bud until a copper ring formed (mean duration of application per bud ± SD: Portasol 10 ± 3 s, Rhinehart 20 ± 5 s; mean iron temperature ± SD: Rhinehart: 433 ± 23°C, Portasol: 436 ± 28°C). The cauterized horn bud was not removed. The duration of iron contact was similar between sides (mean duration of application per bud ± SD: left 15 ± 7 s, right 16 ± 7 s), as was iron temperature (mean ± SD: left 437 ± 29°C, right 432 ± 22°C). Meloxicam tablets were administered orally (1 mg/kg) in a gelatin capsule (3.5 g; Torpac Inc., Fairfield, NJ) immediately after disbudding. One researcher (SJJA) performed all disbudding and, due to the nature of the procedure, was not blinded to the type of iron used.

Wounds were scored each day by 1 of 5 trained observers until they had completely re-epithelialized (0/1 scoring; Figure 1; inter-observer reliability: Cohen's κ ≥0.70). Observers were blind to the type of iron used on each horn bud; however, it was generally possible to differentiate Portasol and Rhinehart wounds while necrotic tissue was present. We took digital photographs of the wounds every Monday and Thursday with a DSLR camera (D5300; Nikon Corp., Tokyo, Japan). Photos were taken 15 cm from the wound. A measuring tape was placed to the right of the wound and included in the photographs to evaluate wound size. During photography, the calf was restrained and blindfolded in a head device in her home pen (
Jimenez et al., 2019
Acute pain responses in dairy calves undergoing cornual nerve blocks with or without topical anesthetic.
J. Dairy Sci. 2019; 102: 3431-3438
10.3168/jds.2018-15445
).
We used a thermal camera (first 5 calves: RAZ-IR Nano, Sierra Pacific Innovations, Las Vegas, NV; last 5 calves: T430, FLIR Systems Inc., Wilsonville, OR) to measure wound surface temperature every Monday and Thursday until re-epithelialization. Photos were taken out of direct sunlight using an umbrella placed over the calf's pen (2.7 m diameter; Morshade, Williamsport, TN). We placed a 5 × 5 cm cardboard frame around the wound to standardize the image area. The maximum temperature of the framed area was determined using image analysis software (IR Analyzer, Sierra Pacific Innovations; ResearchIR Max, FLIR Systems, Inc.; inter-observer reliability: intraclass correlation coefficient = 0.99).

We used linear mixed models to evaluate the effect of iron (Portasol vs. Rhinehart) on the number of days each tissue type was present and on the latency for the wounds to re-epithelialize. Iron was fitted as a fixed effect and calf as a random effect. Exudate was too rare to warrant statistical comparisons. One calf developed digestive problems (diarrhea, undigested milk, lack of appetite) and was euthanized 46 d after disbudding, at which point the necrotic tissue had fallen off on both sides but neither of the wounds had re-epithelialized. For this calf, we included in the analysis only the number of days that attached and detached necrotic tissues were present.
We used linear mixed models to assess the effect of iron on the size and maximum surface temperature of the wound over 56 d following disbudding, after which time >50% of the wounds had re-epithelialized. For each model, data for each calf were averaged by week for each side, resulting in 6 to 9 data points per side per calf. Iron, days since disbudding, and their interaction were included as fixed effects, and calf as a random effect.
All models were fitted using the REML method implemented in the nlme (
Pinheiro et al., 2017
nlme: Linear and nonlinear mixed effects models. R package version 3.1–131.
http://CRAN.R-project.org/package=nlme
Date: 2017
) package in R, version 3.4.1 (
R Core Team, 2017
R: A language and environment for statistical computing.
R Foundation for Statistical Computing, Vienna, Austria2017
). The unit of analysis was horn bud nested within calf. We controlled for side (left vs. right) by including it as a fixed effect in all of the models. Degrees of freedom were estimated using the containment method. Homogeneity of variance and normality were confirmed using residuals versus fits plots and Q-Q plots, respectively. A first-order autoregressive correlation structure was applied to models that included day relative to disbudding as a fixed effect. This correlation structure was selected based on the lowest Akaike information criterion value. We reported least squares means and standard errors, unless noted otherwise. When interaction effects were present (P < 0.09), we performed pairwise comparisons using Tukey's method with the lsmeans package (
Lenth, 2016
Least squares means: The R package lsmeans.
J. Stat. Softw. 2016; 69: 1-33
10.18637/jss.v069.i01
).

We used the data collected in the experiment described above (experiment A) to investigate differences in wound healing between the left and right sides of the head. To examine the external validity of our results, we supplemented this analysis with data from 2 other disbudding studies, labeled experiments B and C. These 2 studies were included retrospectively and were designed to describe wound healing following cautery disbudding.

We repeated the analysis described in Part I for the number of days each tissue type was present and on the latency for the wounds to re-epithelialize, but including side as the independent variable, and controlling for iron effects. In the wound size and temperature models, we included side and days since disbudding as fixed effects.

The right side of 1 kid was excluded from the analysis due to early horn regrowth that prevented wound healing. We used linear mixed models to evaluate the effect of side on the number of days each tissue type was present and on the latency for the wounds to re-epithelialize. Kid was fitted as a random effect.
We used a linear mixed model to assess the effect of side on wound size over 50 d following disbudding, after which time >50% of the wounds had re-epithelialized. Side and its interaction with days since disbudding were included as fixed effects, and kid as a random effect.

In all experiments, models were fitted as described in Part I. To estimate how much of the variation in latency to re-epithelialize arose from differences between versus within subjects, variance components were estimated from ANOVA type I sums of squares using the R VCA package (
Schuetzenmeister and Dufey, 2018
VCA: Variance component analysis. R package version 1.3.4.
https://CRAN.R-project.org/package=VCA
Date: 2018
) for random models.

Disbudding with the Portasol or Rhinehart X50A resulted in similar healing times: 53 and 55 d, respectively. Wound healing differed between the left and right sides in calves, but this result had low external validity, and the biological meaning of this asymmetry is unclear. A sizable amount of the variation in wound healing was due to differences within individuals, indicating that a within-subjects design does not have a clear advantage over a between-subjects design in this research context. Practical strategies to improve healing after disbudding and an understanding of the factors affecting this process are needed.