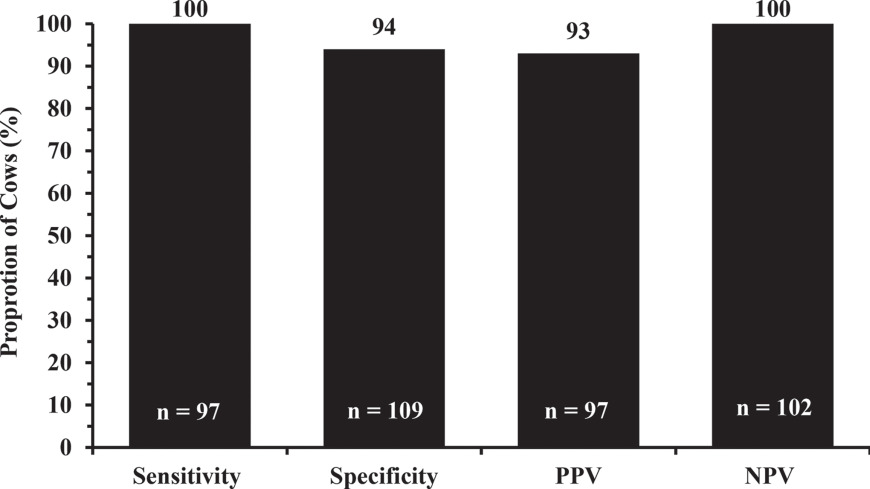 Early pregnancy diagnosis is critical to reproductive success on dairy farms. Reproductive success depends on cows becoming pregnant before 130 d in milk and then maintaining that pregnancy. The earlier non-pregnant cows are identified, the sooner they can be reinseminated, thus reducing days to pregnancy. Assays for pregnancy-specific protein B (PSPB) and pregnancy-associated glycoproteins can be used to diagnose pregnancy >28 d post-artificial insemination (AI) in lactating cows. The objective of this study was to determine whether percentage change in serum levels of PSPB within cow from d 17 to 24 can be used to identify non-pregnant cows using a commercially available assay. This study was performed on a large commercial dairy. Blood samples were taken at d 17 and 24 post-AI. The d 17 sample served as a baseline based on previous data. Cows with a 10% increase in serum PSPB levels from d 17 to 24 were considered pregnant. Lactating dairy cows (n = 206; 39% primiparous and 61% multiparous) were synchronized using G6G-Ovsynch. The PSPB diagnosis was compared with the herd veterinarian's diagnosis via ultrasound on d 34. The sensitivity for a 10% cutoff as a non-pregnant diagnosis was 100%, and the specificity was 93.58%. The positive predictive value was 93.27%, and the negative predictive value was 100%. Low PSPB levels at d 24 were predictive of early pregnancy loss by 60 d post-AI. To our knowledge no other method can diagnose non-pregnancy with 100% accuracy and predict pregnancy loss earlier than 24 d post-AI. Using comparative PSPB samples at d 17 and 24 post-AI provides an accurate non-pregnancy diagnosis earlier than any other pregnancy diagnosing method.

This project was made possible by funding from the Michigan Alliance for Animal Agriculture, East Lansing. A special thanks is given to Ken and Kerry Nobis and all the employees at Nobis Dairy Farm (St. Johns, MI) for their assistance and use of the cows. We also thank Thainá Minela, Michigan State University, East Lansing, for assisting with collection of samples for this project.