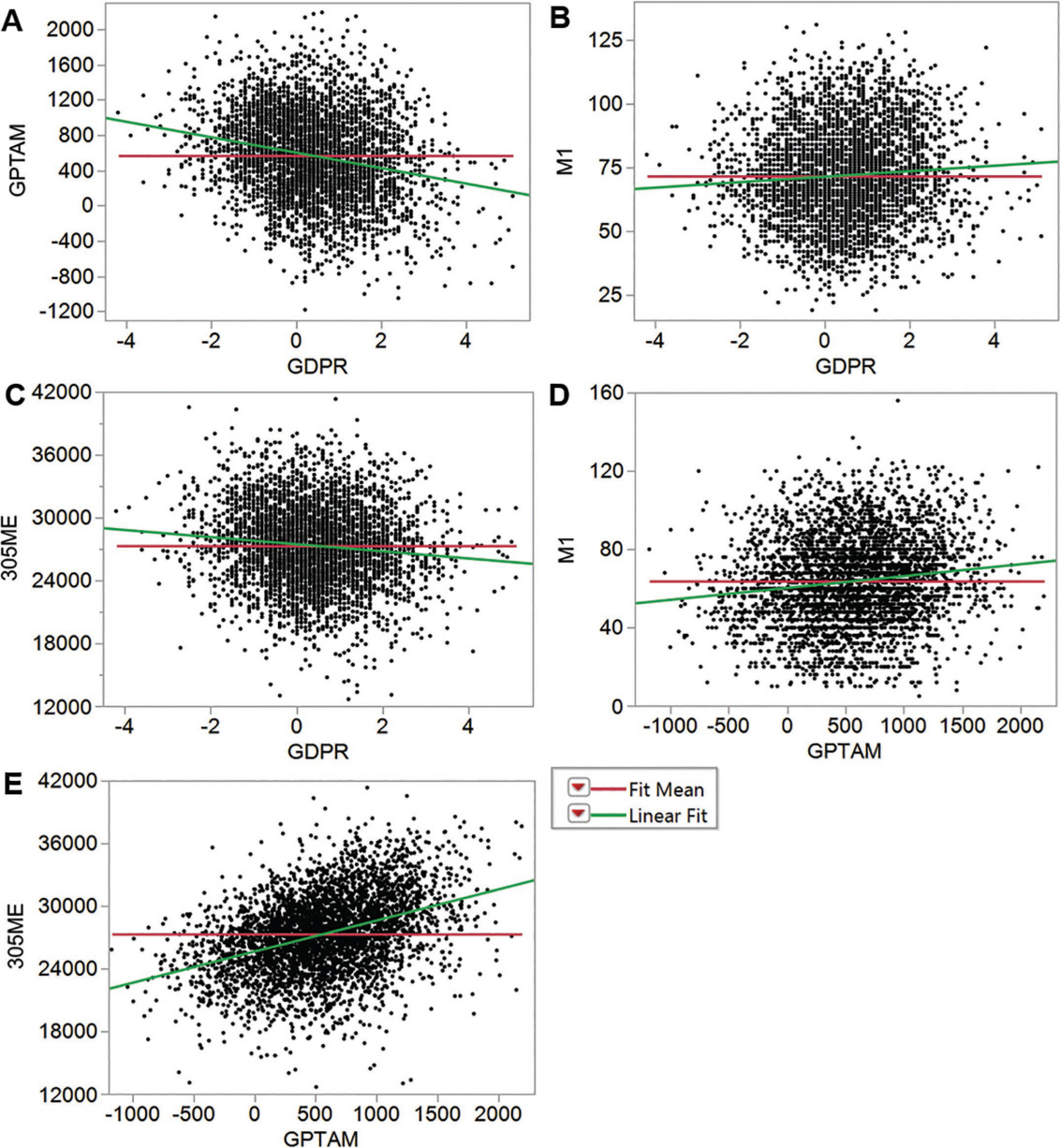 The use of genomic testing for selecting replacement heifers in commercial farms has recently attracted much attention. Fertility traits are among the most complex, hard to measure, and lowly heritable traits, and hence they can benefit the most from genomic testing. The objectives of this study were to assess the relationship between early genomic prediction of daughter pregnancy rate (GDPR) and pregnancy at the first service (P1), pregnancy at the end of lactation (PEND), number of services for conception (NSFC), days from calving to first service (TP1), and days open (TPEND). Data for GDPR, milk production, and reproductive outcomes from 1,401 multiparous and 3,044 primiparous Holstein cows from 4 commercial farms with the same reproductive management were used in the analyses. All animals were genotyped and genomically evaluated as heifers before first breeding, so no phenotypic data were available for predicting genomic merits. In addition, all animals were genotyped and evaluated as heifers before first breeding, so no phenotypic data were available for prediction. Data for GDPR and milk production were categorized in quartiles. The statistical models included GDPR, farm-year-season of the first insemination, milk yield, breeding code (estrus detection or timed artificial insemination), and the interaction terms as potential predictors for the different reproductive outcomes evaluated. Data were analyzed separately for primiparous and multiparous cows. The proportion of cows bred by estrus detection increased linearly from lowest to highest GDPR in primiparous cows. There were positive associations of GDPR for P1, PEND, NSFC, TP1, and TPEND in both primiparous and multiparous cows. For instance, positive GDPR effects in multiparous cows included a 15.7% higher P1 (47.6% vs. 31.9%), 11.9% higher PEND (84.9% vs. 73.0%), and 48.0-d shorter TPEND (139.8 vs. 175.7 d) for the highest quartile compared with the lowest quartile. Milk yield affected PEND in multiparous cows, and TPEND and NSFC affected PEND in primiparous cows. The only significant interaction between GDPR and milk production was detected for NSFC in primiparous cows, where high-producing cows showed a reduction in NSFC as GDPR increased, whereas low-producing cows showed no relationship between GDPR and NSFC. Overall, our findings show that GDPR can be effectively used as a predictor of future reproductive performance, reaffirming the potential benefits of applying early genomic predictions for making accurate early selection decisions.

The data used for the current study were collected from 4 commercial dairy farms located in south-central San Joaquin Valley in California. Farms were identified as A, B, C, and D to maintain confidentiality. A total of 3,044 Holstein primiparous cows from the 4 farms (A, B, C, and D) and 1,401 Holstein multiparous cows from 3 farms (B, C, and D) were used to evaluate the association between GDPR and different reproductive outcomes. All animals were genotyped using SNP platforms commercially available in the United States (Clarifide, Zoetis, Parsippany, NJ) when heifers were of pre-breeding age (i.e., before first breeding) between 2010 and 2015. All animals were genomically evaluated using 50k SNP across the genome. Note that the genetic base for DPR changed in December 2014 using a correction factor equal to 0.20. Therefore, in this study, the DPR of heifers tested in 2015 were readjusted (i.e., DPR + 0.20), so all the DPR values had the same genetic base and same meaning. The cows used in this study did not contribute phenotype data to the national evaluation (i.e., these cows were not included in the reference population to predict genomic breeding values). The GDPR values were obtained from the US national evaluation provided by the Animal Improvement Programs Laboratory-USDA when the animals were heifers. In all farms, cows were housed in freestall barns bedded with sand or dried manure solids and equipped with fans and sprinklers for evaporative cooling, and cows were milked 2 (farms A, B, and D) or 3 (farm C) times a day. In all farms, cows received a TMR to meet or exceed the nutrient requirements for a lactating Holstein cow producing 35 to 45 kg of milk/d with 3.5% fat and 3.2% true protein when DMI is 21 to 23 kg/d (
NRC, 2001
Nutrient Requirements of Dairy Cattle. 7th rev. ed. Natl. Acad. Sci., Washington, DC2001
). Diets were fed to cows located in a group pen and adjusted according to refusals in each group.

Cows used in the current study were exposed to a similar reproductive management that included the use of the Presynch-Ovsynch program with insemination after estrus detection, starting after the second PGF2α of the Presynch program. Briefly, all cows in the 4 farms received an intramuscular injection of PGF2α [i.e., 25 mg of dinoprost tromethamine – 5 mL of Lutalyse i.m. (Zoetis Inc., Kalamazoo, MI), or 500 µg of cloprostenol sodium – 2 mL of Estrumate i.m. (Merck Animal Health, Madison, NJ)] at either 36 DIM (farms C and D) or 46 DIM (farms A and B). A second intramuscular injection of PGF2α was administered 14 d later. At the second injection of PGF2α, cows' tailheads were painted daily with chalk, and those identified in estrus received AI on the same morning. Cows not observed in estrus between 12 and 14 d of the second PGF2α treatment were enrolled in the Ovsynch program. The protocol included an intramuscular injection of GnRH [i.e., 100 µg of gonadorelin diacetate – 2 mL of Cystorelin i.m. (Merial Inc., Duluth, GA); 100 µg of gonadorelin hydrochloride – 2 mL of Factrel i.m. (Zoetis Inc.); or 100 µg of gonadorelin acetate – 2 mL of Fertagyl i.m. (Merck Animal Health)] followed by an intramuscular injection of PGF2α 7 d later. A second intramuscular injection of GnRH was administered at 56 or 72 h after the PGF2α. In cows receiving GnRH at 56 h, timed AI was performed 16 h later. Cows administered GnRH at 72 h received timed AI at 72 h (Cosynch). If cows were detected in estrus after the PGF2α treatment of the Ovsynch protocol, then AI was performed the same day.
Pregnancy was diagnosed via transrectal palpation on d 35 ± 3 after AI. Presence of an amniotic vesicle and membrane slip was the criterion for determining pregnancy. Pregnant cows on d 35 ± 3 were re-examined for pregnancy via transrectal palpation 5 wk later (d 70 ± 3 d of pregnancy) to reconfirm pregnancy status. In all farms, cows were rebred when detected in estrus or after being diagnosed nonpregnant. Cows diagnosed nonpregnant were resynchronized with Ovsynch starting on the day of pregnancy diagnosis.
The reproductive responses evaluated included P1, TP1, NSFC, PEND, and TPEND. Traits P1 and PEND were binary variables, coded as 1 if the cow became pregnant and 0 otherwise. The variable NSFC was the number of services performed to obtain a pregnancy. The variable TP1 was the interval from calving to the first service, and TPEND was days from calving to pregnancy or end of lactation. Average milk production data were obtained for the first 2 test-day records and defined as M1. Additionally, 305-d mature-milk equivalent (ME305) was obtained. Data for reproductive outcomes and milk production were collected from the on-farm software (DairyComp, Valley Agriculture Software, Tulare, CA).

All statistical analyses were conducted using R software version 3.4.3 (https://www.r-project.org/). The data for primiparous and multiparous cows were analyzed separately because multiparous cows were not available for farm A. The data for GDPR and milk production (M1 and ME305) were categorized according to quartiles across all cows and farms. The values for GDPR, M1, and ME305 were grouped in ascending order from lowest (Q1) to highest (Q4) quartiles. The M1 was used in the models for P1 and TP1, whereas the ME305 was used in the models for NSFC, PEND, and TPEND. Traits P1 and PEND were analyzed using logistic regressions, NSFC was analyzed using Poisson regression, and TP1 and TPEND were analyzed using linear regressions. The season for the first service was categorized as cool (November–April) or warm (May–October), and to account for the variability due to year, season, and farm, a new variable denoted as farm-year-season (year-season within each farm) was created. All statistical models included the effects of GDPR, farm-year-season, milk yield, and the interaction between GDPR and milk yield. Correlation analyses were performed for genomic PTA for milk (GPTAM), GDPR, M1, and ME305. Differences with P ≤ 0.05 were considered significant, and differences with 0.05 < P ≤ 0.10 were considered tendencies. Interactions were considered significant when P ≤ 0.05.

Relationship Between Breeding Strategies and GDPR

Association Between GDPR and P1

Association Between GDPR and TP1

Association Between GDPR and NSFC

Association Between GDPR and PEND

Association Between GDPR and TPEND

The highest quartile for GDPR was associated with fewer days to first service, greater pregnancy at first service, fewer services to pregnancy, fewer days to pregnancy at the end of lactation, and a greater proportion of pregnant cows at the end of lactation. Significant interactions between milk production and GDPR were not apparent for most of the reproductive traits evaluated. Farm-year-season had a substantial effect on all traits, highlighting the influence that the environment has on dairy cow reproductive performance. The current findings underscore the idea that producers should integrate GDPR as part of the production management program in a manner complementary to milk production to improve both profitability and sustainability of dairy farming.

The authors thank the owners of the 4 dairy farms in California who kindly agreed to share their data to perform the current study. The authors acknowledge USDA (NIFA AFRI Translational Genomics for Improved Fertility of Animals grant no. 2013-68004) for financial support in this research. The authors have not stated any conflicts of interest.