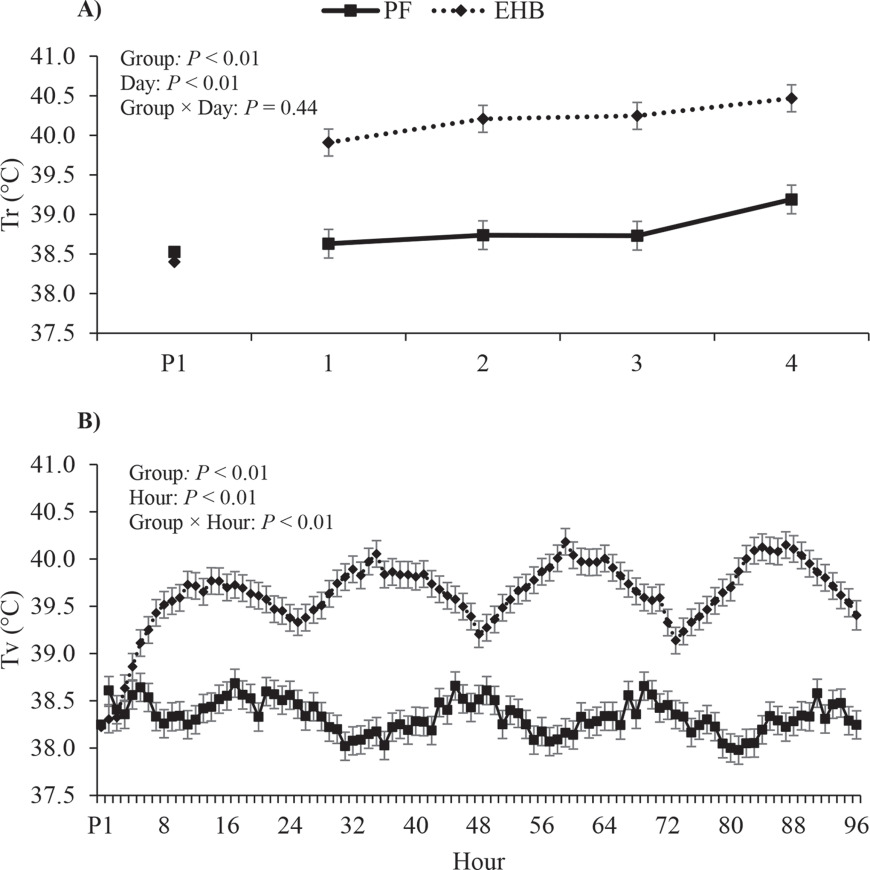 Validating a heat stress model: The effects of an electric heat blanket and nutritional plane on lactating dairy cows

The efficacy of an electric heat blanket (EHB) has previously been confirmed as an alternative method to evaluate heat stress (HS). However, a pair-feeding design has not been used with the EHB model. Therefore, study objectives were to determine the contribution of the nutritional plane to altered metabolism and productivity during EHB-induced HS. Multiparous Holstein cows (n = 18; 140 ± 10 d in milk) were subjected to 2 experimental periods (P); during P1 (4 d), cows were in thermoneutral conditions with ad libitum feed intake. During P2 (4 d), cows were assigned to 1 of 2 treatments: (1) thermoneutral conditions and pair-fed (PF; n = 8) or (2) EHB-induced HS with ad libitum feed intake (n = 10). Overall, the EHB increased rectal temperature, vaginal temperature, skin temperature, and respiration rate (1.4°C, 1.3°C, 0.8°C, and 42 breaths/min, respectively) relative to PF cows. The EHB reduced dry matter intake (DMI; 47%) and, by design, PF cows had a similar pattern and extent of decreased DMI. Milk yield decreased in EHB and PF cows by 27.3% (12.1 kg) and 13.4% (5.4 kg), respectively, indicating that reduced DMI accounted for only ∼50% of decreased milk synthesis. Milk fat content tended to increase (19%) in the EHB group, whereas in the PF cows it remained similar relative to P1. During P2, milk protein and lactose contents tended to decrease or decreased (1.3 and 2.2%, respectively) in both EHB and PF groups. Milk urea nitrogen remained unchanged in PF controls but increased (34.2%) in EHB cows relative to P1. The EHB decreased blood partial pressure of CO2, total CO2, HCO3, and base excess levels (17, 16, 17, and 81%, respectively) compared with those in PF cows. During P2, the EHB and PF cows had similar decreases (4%) in plasma glucose content, but no differences in circulating insulin were detected. However, a group by day interaction was detected for plasma nonesterified fatty acids; levels progressively increased in PF controls but remained unaltered in the EHB cows. Blood urea nitrogen increased in the EHB cows (61%) compared with the PF controls. In summary, utilizing the EHB model indicated that reduced nutrient intake explains only about 50% of the decrease in milk yield during HS, and the postabsorptive changes in nutrient partitioning are similar to those obtained in climate-controlled chamber studies. Consequently, the EHB is a reasonable and economically feasible model to study environmental physiology of dairy cows.

Data were statistically analyzed using SAS software (version 9.4; SAS Institute Inc., Cary, NC). Body temperature indices, production parameters, and blood metabolites were analyzed using the MIXED procedure of SAS with an autoregressive covariance structure and day of the experiment as the repeated effect. The model included group, day, and group by day interaction. Each specific variable's P1 value served as a covariate. In addition, the effects of period were analyzed separately using the MIXED procedure of SAS. The model included group, period, and their interaction; cow was included as a random effect. Results are reported as least squares means and were considered different when P ≤ 0.05 and a tendency if 0.05 < P ≤ 0.10.

Understanding the biological reasons why HS reduces production is a prerequisite to developing mitigation strategies aimed at reducing economic losses to the global dairy industry. This study confirms that the EHB is an effective model to study HS in dairy cows, as indicated by increased body temperature variables, reduced production parameters, and altered physiological metrics. By employing the PF design, we clearly illustrated that a lowered nutritional plane explains only approximately 50% of the decreased milk yield in HS cows, which is remarkably similar to results from previous environmental chamber studies. In addition, the blunted adipose tissue mobilization, increased plasma biomarkers of muscle catabolism, and altered blood gas variables observed for the EHB are comparable to results in natural and climate-controlled chamber HS studies. Consequently, the EHB is an alternative model to implement discovery-based research and to evaluate nutritional HS mitigation strategies.

The study described herein was funded in part by the Norman Jacobson Endowed Professorship at Iowa State University, Ames. The authors state that they have no conflicts of interest.