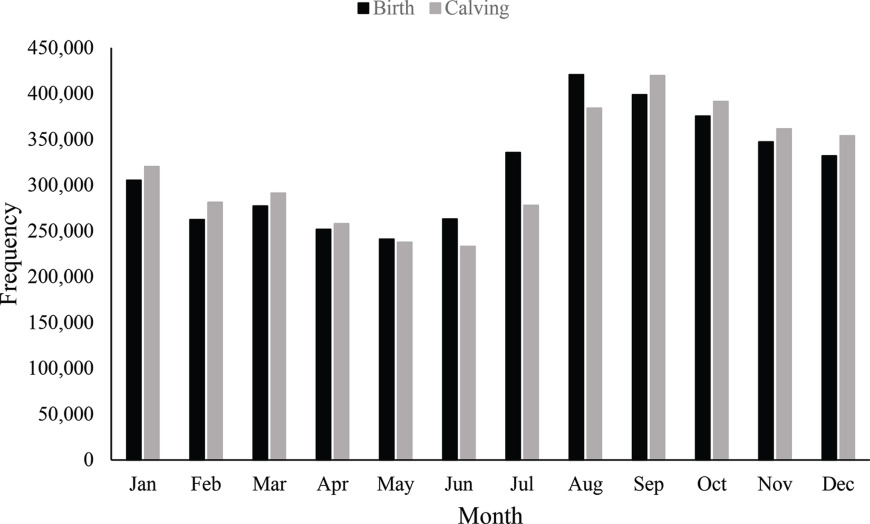 A large-scale study on the effect of age at first calving, dam parity, and birth and calving month on first-lactation milk yield in Holstein Friesian dairy cattle

Open ArchivePublished:October 14, 2020DOI:https://doi.org/10.3168/jds.2020-18431
A large-scale study on the effect of age at first calving, dam parity, and birth and calving month on first-lactation milk yield in Holstein Friesian dairy cattle
Previous ArticleGenetic, farm, and lactation effects on behavior and performance of US Holsteins in automated milking systems
Next ArticleDairy farmer advising in relation to the development of standard operating procedures

Milk yield during first lactation is an important economical trait. Age at first calving (AFC) is considered an important predictor of subsequent milk yield. In addition, both season of birth, as well as season of calving, have been shown to influence milk production, with conflicting results. Finally, higher parity of the dam has been associated with a lower performance of the offspring. The aim of the present study was to assess the effect of the above-mentioned factors based on a large-scale study and to rank the most important determinants for first-lactation milk yield. Data on 3,810,678 Holstein Friesian heifers, born in Belgium and the Netherlands between 2000 and 2015, were provided by Cooperative CRV and CRV BV (Arnhem, the Netherlands) and consisted of birth dates, calving dates, and first-lactation productions. In addition, herd, sire, and dam information was provided. Linear regression models were built with herd-calving year and sire as random effects and 305-d energy-corrected milk (ECM) yield during first lactation as outcome variable. Birth month, calving month, parity of the dam, and AFC were included as fixed effects in the model and a dominance analysis was performed to rank the associated factors according to importance. Results revealed AFC to be the most important factor (R2 = 0.047), with an increase in ECM up to an age of 33 mo. Calving month was a more important predictor than birth month (R2 = 0.010 vs. R2 = 0.002, respectively), with the highest first-lactation production in heifers calving in October to December, and the lowest in heifers calving in June and July. Birth month had a limited effect on first-lactation milk yield (R2 = 0.002), potentially masked by rearing strategies during early life. Finally, parity of the dam ≥3 was associated with a reduced ECM of the offspring (R2 = 0.002). In conclusion, our results show AFC to be an important determinant of milk yield during first lactation. In addition, seasonal patterns in milk production are seen, which should be further explored to identify the underlying mechanism.

The initial data set for this study was provided by CRV (Arnhem, the Netherlands) and contained milk production data of 4,055,678 dairy heifers. Heifers had at least 75% proportion of Holstein Friesian genes and were born in Flemish (Belgian) and Dutch herds between January 2000 and May 2015. All animals were registered for milk recording following first calving between September 2001 and February 2017. Herd, birth date, calving date, duration of lactation, milk yield, and milk composition during first lactation of the heifers were available. In addition, sire, dam, and parity of the dam were provided.

All statistical analyses were performed in R 3.6.1 (
R Core Team, 2019
R: A language and environment for statistical computing.
R foundation for Statistical Computing, Vienna, Austria2019
http://www.R-project.org/
). To investigate which factors had a significant effect on the 305-d ECM during first lactation, linear mixed models were built using the package lme4 (
Bates et al., 2015
Fitting linear mixed-effects models using lme4.
J. Stat. Softw. 2015; 67: 1-48
https://doi.org/10.18637/jss.v067.i01
). The interaction among herd (n = 26,189) and year of calving (n = 17) was defined as herd-calving year and included as random effect in the model, to account for between-herd differences and within-herd progress over time. In addition, sire was included as random effect to account for differences in genetic background. The other predictor variables (birth month, calving month, AFC, and parity of the dam) and their significant interactions were included as fixed effects.
Finally, following linear regression model was used:
Yijklmno = μ + BMi + CMj + AFCk + DPARl + BMi × CMj + BMi × AFCk + SIm + HCYn + eijklmno,
where Yijklmno is the 305-d ECM of a heifer; μ is the overall mean; BMi is fixed effect of birth month i; CMj is fixed effect of calving month j; AFCk is fixed effect of age at first calving k; DPARl is fixed effect of dam parity l; BMi × CMj is fixed effect of the interaction between birth month i and calving month j; BMi × AFCk is fixed effect of the interaction between birth month i and AFCk; SIm is random effect of sire m; HCYn is random effect of herd-calving year n; and eijklmno is random residual effect. The results of the model are presented as least squares means ± standard error (LSM ± SE), and multiple comparisons were performed using a Tukey test (significance at P < 0.05).
Statistical significance (P < 0.001) was easily reached due to the size of the data set and P-values could not be used to determine the most important factor in the model. Moreover, multicollinearity was foreseeable, as month of calving is naturally a result of birth month and AFC. Hence, a dominance analysis was performed to evaluate the importance of each predictor in the regression model (
Azen and Budescu, 2003
The dominance analysis approach for comparing predictors in multiple regression.
Psychol. Methods. 2003; 8 (12924811): 129-148
https://doi.org/10.1037/1082-989X.8.2.129
). This method offers a general approach to compare predictors by including several other comparison methods (e.g., correlations and regression coefficients). Practically, this is realized by examining the unique variance accounted for by the predictor across all possible regression submodels involving that predictor. Outcomes of the dominance analysis are R2 values for each predictor, which are adjusted for shared variances with other predictors (i.e., representing the real explained variance). In addition, the R2 of the individual effects in the model sum to the R2 of the full model, containing all predictors (
Azen and Traxel, 2009
Using dominance analysis to determine predictor importance in logistic regression.
J. Educ. Behav. Stat. 2009; 34: 319-347
https://doi.org/10.3102/1076998609332754
). In the present study, dominance analysis was performed using the R package dominanceanalysis (
Bustos and Soares, 2019
Dominanceanalysis: Dominance Analysis.
https://CRAN.R-project.org/package=dominanceanalysis
Date: 2019
).

Parity of the Dam

Results of the present study show AFC to be an important determinant of milk yield during first lactation. Furthermore, calving season was found to have a larger effect on first-lactation performance than birth season, with the highest milk yield recorded in heifers calving in autumn. A limited effect of birth month on milk yield was noticed, possibly masked by large herd-to-herd differences in the early postnatal management of calves. Finally, dams with a parity of 3 or more are shown to negatively influence their daughters' milk yield.

The authors have not stated any conflicts of interest.