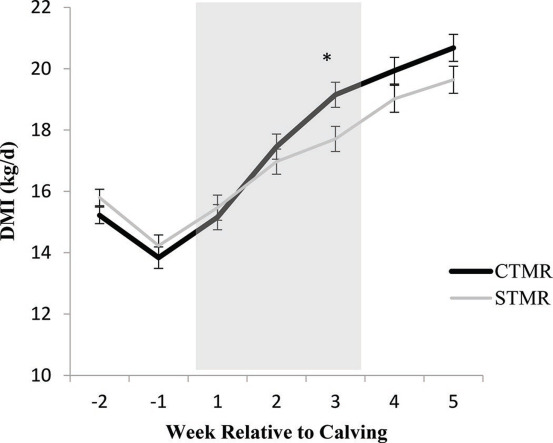 Addition of straw to the early-lactation diet: Effects on feed intake, milk yield, and subclinical ketosis in Holstein cows

This study evaluated feed intake, milk yield, and subclinical ketosis in dairy cows in early lactation fed 2 different diets postpartum. Cows are typically offered a high-energy ration immediately after calving. We compared a conventional high-energy total mixed ration (TMR) with a transition ration that contained chopped straw. We predicted that adding chopped straw would increase dry matter intake, milk production, and indicators of energy metabolism during the first 3 wk of lactation compared to cows fed a conventional high-energy TMR. We also predicted that carryover effects would be likely for at least 2 wk after treatment ended. A total of 68 mixed-age Holstein cows were enrolled in the study 3 wk before their expected calving. All cows were managed on a single high-forage diet during the dry period. At calving, cows were allocated to 1 of the 2 diets: half to the conventional high-energy TMR (CTMR; n = 34; net energy for lactation = 1.61 Mcal/kg; neutral detergent fiber = 31.7%), and the other half to a high-forage TMR containing chopped wheat straw, equivalent to 4.27% dry matter (STMR; n = 34; net energy for lactation = 1.59 Mcal/kg; neutral detergent fiber = 33.7%) for 3 wk after calving. Cows on STMR were then shifted to CTMR for the next 2 wk to study short-term residual effects on the performance of cows. Treatments were balanced for parity, body condition score, and body weight. Feed intake was measured daily from 2 wk before to 5 wk after calving using automatic feed bins. Blood was sampled twice weekly from 2 wk before to 5 wk after calving, and β-hydroxybutyrate and glucose were measured in serum samples. Subclinical ketosis was identified using a threshold of β-hydroxybutyrate ≥1.0 mmol/L in wk 1 after calving and ≥1.2 mmol/L in wk 2 to 5 after calving. Cows were milked twice daily, and weekly samples (composite samples of morning and afternoon milkings) were analyzed to determine total solids, fat, protein, lactose, and somatic cell count. Data were analyzed in 2 separate periods: the treatment phase (wk +1, +2, and +3) and the post-treatment phase (wk +4 and +5). The addition of straw to the TMR negatively affected the dry matter intake of STMR cows during wk 2 and 3 of lactation. Daily milk yield during the first 5 wk of lactation was lower in STMR cows than in CTMR cows. Concentrations of β-hydroxybutyrate were higher in CTMR cows than in STMR cows during wk 1, but this effect was reversed during wk 2 and 3 of lactation. By 21 d in milk, STMR cows had a greater risk of developing subclinical ketosis than CTMR cows. Adding chopped wheat straw to the TMR during the first 21 d after calving lowered dry matter intake and provided no metabolic or production benefits to lactating dairy cattle.

This study was conducted at The University of British Columbia's Dairy Education and Research Centre (Agassiz, British Columbia) from January to July 2012. The study was approved by The University of British Columbia Animal Care Committee (Application A10–0162) and performed in accordance with the guidelines outlined by the
Canadian Council on Animal Care, 2009
The CCAC guidelines on: the care and use of farm animals in research, teaching and testing.
Canadian Council on Animal Care, Ottawa, ON, Canada2009
. A total of 68 Holstein dairy cows (21 primiparous and 47 multiparous) were enrolled in this study. At enrollment, cows were randomly assigned to 1 of 2 treatments: a high-energy lactation TMR [CTMR; n = 34; 10 primiparous and 24 multiparous cows (average parity ± standard deviation: 3.2 ± 1.7)]; or a high-forage TMR containing chopped wheat straw [STMR; n = 34; 11 primiparous and 23 multiparous cows (average parity ± standard deviation: 3.4 ± 1.9)].

Cows were moved into an experimental prepartum pen at approximately 3 wk before their expected calving date. The prepartum pen consisted of 24 freestalls fitted with a mattress (Pasture Mat, Promat Inc., Woodstock, ON, Canada) covered with 5 cm of sand bedding, 12 feed bins (Insentec, Marknesse, Netherlands), and 2 water troughs (Insentec). The Insentec feeding system used in the present study has been described in previous studies (
Chapinal et al., 2007
Technical note: Validation of a system for monitoring individual feeding and drinking behavior and intake in group-housed cattle.
J. Dairy Sci. 2007; 90 (18024766): 5732-5736
https://doi.org/10.3168/jds.2007-0331
;
Neave et al., 2018
Behavioral changes before metritis diagnosis in dairy cows.
J. Dairy Sci. 2018; 101: 4388-4399
https://doi.org/10.3168/jds.2017-13078
). Stocking density in the pretreatment (prepartum pen; period 1), treatment (1–20 DIM; period 2), and post-treatment (period 3) periods remained constant throughout the study. As experimental cows moved from one period to the next (i.e., from the prepartum pen to the postpartum pen), an equivalent number of cows were removed to maintain stocking density. Cows that were moved out of the pens were either experimental cows that were eligible to move or “filler cows” (non-experimental cows that were housed in the pen to maintain stocking density). During the prepartum period, all cows were fed the same dry-cow TMR (DTMR), and all 24 cows in the pen had access to all 12 feed bins (Table 1). When cows showed signs of imminent calving (i.e., udder enlargement, milk let-down, relaxation of the tail ligament) they were relocated to an individual maternity pen (located in the same barn as the other experimental pens, directly adjacent to the prepartum pen) for the calving event and then moved to an experimental postpartum pen within 24 h after calving. The postpartum pen was located adjacent to the prepartum pen and also consisted of 24 free stalls, 12 Insentec feed bins, and 2 Insentec water troughs; it was stocked with 24 animals per pen. The system allowed cows on both treatments to be housed in the same group pen. Cows remained in the treatment postpartum pen for 3 wk (d 0 to 21 relative to calving) and were then relocated to an adjacent postpartum pen consisting of 12 free stalls, 6 Insentec feeders, and 1 Insentec water trough; stocking was maintained at 12 cows in the pen for an additional 2 wk of observation (d 22 to 35), during which all cows were provided with the same diet (CTMR). Before and after calving, cows were fed twice daily (0700 h and 1700 h).
Table 1Composition and component analysis (% of DM unless otherwise noted) of composite samples of 3 TMR types fed to transition cows: dry-cow TMR (DTMR), conventional postpartum TMR (CTMR), and postpartum TMR with added wheat straw (STMR; fed only during the 3-wk postcalving treatment period)
1
All cows were fed the CTMR after the treatment period (n = 34 cows per treatment).
1 All cows were fed the CTMR after the treatment period (n = 34 cows per treatment).
2 For DTMR, the major ingredients included 45% Amino Plus (Ag Processing Inc., Omaha, NE), 12% corn gluten meal, 11% soybean meal, 7.36% fine limestone, 5% ground beet pulp, 5% dry cow mineral, 4.32% calcium sulfate, 3.544% distillers corn wheat blend, 1% molasses. CTMR and STMR: 34% rolled barley, 20% fine ground barley, 10% distillers corn wheat blend, 7.3% ground wheat, 6% soybean meal, 6% Amino Plus (Ag Processing Inc.), 5% canola meal, 2.22% fine limestone, 1.18% mill run pellets.

Individual feed intake was calculated from data provided by the Insentec system. Due to the differences between expected and actual calving dates (i.e., cows calving early) we analyzed feed intake up to 14 d prepartum only; all experimental cows had data recorded on these days. If a cow had less than 24 h of recorded data on a particular day, that day was excluded from further analysis. This generally occurred when cows were moved out of the experimental pens into an individual maternity pen for calving. All data from d −1 and d 0 were excluded from the analyses for every cow, because these days were almost always associated with pen changes, resulting in incomplete feed intake data. On the day a cow was moved between pens to accommodate the experimental design, feed intake data for that day were also removed. Following these adjustments to the feed intake data, we defined 7 experimental periods for feed intake: wk −2 (d −14 to −8), wk −1 (d −7 to −2), wk +1 (d 1 to 7), wk 2 (d 8 to 14), wk 3 (d 15 to 21), wk 4 (d 22 to 28), wk 5 (d 29 to 35). The statistical analysis was performed only for postpartum experimental periods.
Statistical analyses were performed with SAS (version 9.4; SAS Institute Inc., Cary, NC), using cow (n = 68) as the experimental unit. The MIXED procedure of SAS was used to analyze differences in DMI, milk yield and components, ECM, energy balance, and BHB and glucose concentrations. Data were analyzed in 2 separate periods: treatment (over 21 d of lactation) and post-treatment (following 2 wk).
The MIXED models included the fixed effects of treatment (STMR vs. CTMR), parity group (primiparous or multiparous), and BCS class (cows with a BCS ≤2.75 were classified as thin; cows with a BCS of 3–3.5 were classified as fair; and cows with a BCS ≥3.75 were classified as fat), with period (weekly periods for DMI, energy balance, milk yield and components, and ECM) or day (for BHB and glucose) specified as repeated measures and the period (or day) × treatment interaction. Cow was treated as a random effect. Data from 68 cows in the first 35 d of lactation were available for evaluation of the treatment effect on SCC. The final model for SCC included treatment (STMR vs. CTMR), day and treatment × day interaction, parity group, BCS class and disease, and the random effect of cow. The distributions of BHB, glucose, and milk fat and protein were skewed to the right and were transformed using the natural logarithm to achieve a normal distribution. All models used an autoregressive covariance structure except BHB, which used a Toeplitz covariance structure (selected on the basis of the smallest Bayesian information criterion). All variables were offered to each model and then removed in a backward stepwise elimination of nonsignificant (P > 0.05) variables. Interactions between treatment and significant covariates were included in the final model. If we found a significant interaction between time and treatment, we reanalyzed the data after stratification by the sample time.
One of our aims was to determine the effect of adding straw to the early-lactation diet on the prevention and treatment of subclinical ketosis. We evaluated this effect with multivariable logistic regression models using the GENMOD procedure in SAS. The models included treatment, parity group, and BCS class. The wk 1 samples served as the referent for the incidence of subclinical ketosis. The effects of treatment on prevention (cows with BHB <1 mmol/L at wk 1 that remained non-ketotic in the following weeks) and cure (those with subclinical ketosis at wk 1 that were normal when tested in the following weeks) were modeled separately using logistic regression as described above.

We found a period × treatment interaction for DMI (P = 0.01), indicating that differences in DMI between treatments varied by week relative to calving. Treatment differences were most pronounced in wk 3 after calving, with STMR cows consuming less feed (Figure 1). In addition, STMR cows tended to have a lower DMI during the post-treatment period (P = 0.08).

Feeding a TMR containing a small amount of wheat straw during the 3 wk immediately after calving offered no metabolic or production benefits for lactating dairy cattle. Under the conditions used in this study, the addition of wheat straw to TMR reduced feed intake and milk yield and increased the incidence of subclinical ketosis.