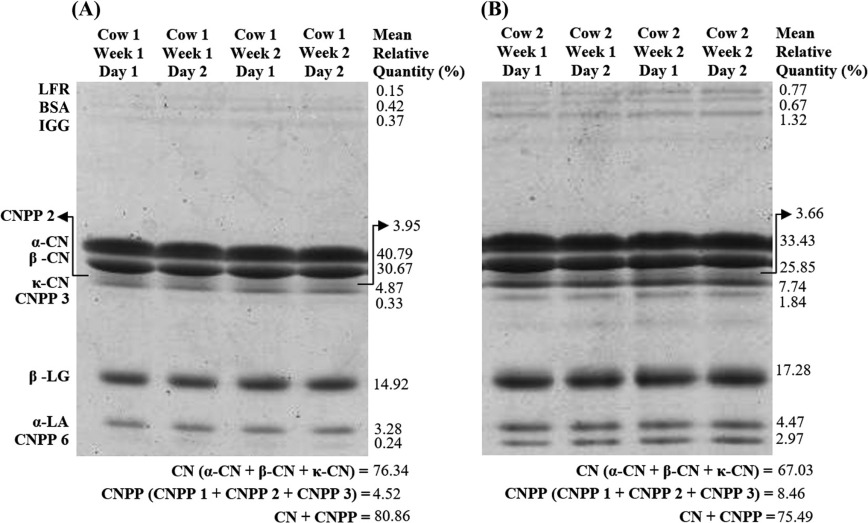 Our objectives were to determine if milk casein as a percentage of true protein (CN%TP) estimated by sodium dodecyl sulfate–polyacrylamide gel electrophoresis (SDS-PAGE) is equivalent to CN%TP estimated by Kjeldahl, and to determine the proportion of casein (CN), casein proteolysis products (CNPP), and serum protein (SP) from milk true protein (TP) that goes into the Kjeldahl noncasein nitrogen (NCN) filtrate and the proportion that stays in the NCN precipitate using SDS-PAGE. Raw milk samples were collected from 16 mid-lactation Holstein cows twice a week for 2 wk. These milks were analyzed for Kjeldahl total nitrogen, nonprotein nitrogen, and NCN content in duplicate, and by SDS-PAGE. The CN%TP determined by Kjeldahl was compared with the CN%TP estimated by SDS-PAGE calculated in 2 ways: as a percentage of only intact caseins divided by TP and as a percentage of both intact caseins and CNPP divided by TP. Three milks varying in fat, lactose, TP, CN, and SP content were formulated. These milks were analyzed in duplicate for Kjeldahl total nitrogen, nonprotein nitrogen, and NCN content, and each of the NCN filtrate and NCN precipitate were analyzed in duplicate by SDS-PAGE for relative quantity (%) of CN, CNPP, and SP. We found that the estimate of CN%TP by Kjeldahl was higher than the estimate of CN%TP by SDS-PAGE that was calculated as only intact CN divided by the total of all protein bands. However, no difference was detected in the estimate of CN%TP by Kjeldahl compared with CN%TP by SDS-PAGE when CNPP were included as CN in the calculation of SDS-PAGE results. Based on SDS-PAGE results, we found that a majority (89%) of the CNPP from the milk (approximately 10.13 out of 11.41% TP) were retained in the Kjeldahl NCN precipitate. Thus, CN%TP measured by Kjeldahl underestimates the amount of proteolytic damage that has been done to CN in milk. It is important for the dairy industry to correctly and rapidly measure the extent of proteolytic damage to milk protein to correctly value milk from a product quality and yield point of view. A rapid and quantitative measure of proteolytic damage to milk protein is needed.

Raw milk from 16 mid-lactation Holstein cows were collected twice in each of 2 wk for a total of 64 samples. All milks were cooled to 4°C immediately after collection, preserved with Microtab II (Advanced Instruments) bronopol preservative, and analyzed for TN, NPN, and NCN content by Kjeldahl (in duplicate) and by SDS-PAGE. The CN%TP given by Kjeldahl was calculated and compared with the CN%TP estimated by SDS-PAGE calculated in 2 ways as follows: (1) using only intact CN bands divided by the total of all protein bands (i.e., CN + CNPP + SP) and (2) including the sum of intact CN and CNPP bands divided by the total of all protein bands.
Next, 3 milks varying in fat, lactose, TP, CN, and SP content were formulated as described by
Kaylegian et al., 2006
Calibration of infrared milk analyzers: modified milk versus producer milk.
J. Dairy Sci. 2006; 89 (16840598): 2817-2832
https://doi.org/10.3168/jds.S0022-0302(06)72555-3
and analyzed for Kjeldahl TN, NPN, and NCN content, in duplicate. During the Kjeldahl NCN sample preparation step, each NCN filtrate and NCN precipitate was collected and analyzed by SDS-PAGE, in duplicate. The relative quantity (%) of CN, CNPP, and SP in each NCN filtrate and NCN precipitate (calculated as optical densitometer mm × OD of each individual band or group of bands on the gel for a sample divided by the total mm × OD of all bands for that sample) was estimated, and the proportion (%) of CN, CNPP, and SP from formulated milk that went into the Kjeldahl NCN filtrate and the proportion that went in the NCN precipitate was determined.

The polyacrylamide gels used to determine the trace quantity (mm × OD) of all protein bands (i.e., intact CN, CNPP, and SP) were made following the procedure described by
Verdi et al., 1987
Variability in true protein, casein, nonprotein nitrogen, and proteolysis in high and low somatic cell count milks.
J. Dairy Sci. 1987; 70 (3571630): 230-242
https://doi.org/10.3168/jds.S0022-0302(87)80002-4
using the gel unit Protean II and the power unit 3000/300 from Bio-Rad (Bio-Rad Laboratories Inc.) gel electrophoresis system. The preparation of the samples for SDS-PAGE was done by diluting each milk with 0.9 g of a buffer that consisted of 10 mM tris(hydroxymethyl) aminomethane (Tris)-HCl, 1.0% SDS, 20% glycerol, 0.02% bromophenol blue tracking dye, and 45 mM dithiothreitol. The weight of milk used for the dilution was calculated based on Kjeldahl TP content of the milk sample to achieve a loading of approximately 28 μg of TP loaded per slot. Each milk plus buffer mixture was placed in a sealed glass vial (Target DP Vials C4000–1W, National Scientific Co.), heated to 100°C using steam, held at 100°C for 3 min, and stored frozen at −80°C. On the day of the SDS-PAGE run, diluted milks were thawed by steam heating to 100°C for 3 min, and then rapidly cooled in an ice-water mixture to about 25°C. Each milk plus buffer mixture was loaded into a different well of the gel. The volume loaded was chosen to achieve a maximum peak OD in the range of 1.0 to 1.4 for the most intense protein band (i.e., αS-CN) in the sample to avoid overloading and nonlinear response in quantitation. One raw milk sample was used as a marker in 1 lane of each gel for evaluation of loading consistency and comparison of resolution of the proteins from gel-to-gel. Three SDS-PAGE runs were performed, each with 2 gels. All gels were scanned with USB GS 800 Densitometer (Bio-Rad Laboratories Inc.) and quantified using Quantity 1 1-D Analysis software (version 4.6.7, Bio-Rad Laboratories, Inc.).
For quantitative analysis, a center line for each lane on each gel was created during the scanning of the gel. The lines were adjusted individually to match the middle section of the bands in each lane. Next, each lane background was adjusted using the rolling disk method of subtraction to obtain a straight baseline for each lane. The detection of bands was done by setting the bracket width of the bands and then by adjusting each band in each lane by moving the brackets up or down based on visual observation. The trace quantity (mm × OD) of the intact CN, CNPP, and SP bands, and the sum of all protein bands (i.e., CN + CNPP + SP), of the gel for each milk was calculated. The estimation of CN%TP by SDS-PAGE was calculated in 2 ways as follows: (1) using only the intact CN bands divided by the total of all protein bands (i.e., CN%TP) and (2) including the sum of intact CN plus CNPP bands divided by the total of all protein bands [CN + CNPP%TP; i.e., (CN + CNPP bands)/all protein bands].

Quantification of CN, CNPP, and SP (%) in Kjeldahl NCN Filtrate and NCN Precipitate

Kjeldahl TN, NPN, and NCN methods were performed for each formulated milk, in duplicate, following the procedures described by the Association of Official Analytical Chemists International, as indicated above. For the Kjeldahl NCN analysis, the volume of acetic acid, sodium acetate, and water were adjusted according to the TP level, as recommended by
Wojciechowski and Barbano, 2015
Modification of the Kjeldahl noncasein nitrogen method to include bovine milk concentrates and milks from other species.
J. Dairy Sci. 2015; 98 (26298747): 7510-7526
https://doi.org/10.3168/jds.2015-9580
. The 6 Kjeldahl NCN filtrates (i.e., 3 milks in duplicate) and 6 NCN precipitates were collected to be analyzed by SDS-PAGE.

Quantification of CN, CNPP, and SP (%) in Kjeldahl NCN Filtrate and NCN Precipitate

The authors thank the Miner Institute (Chazy, NY) for their collaboration by providing individual cow milks for use in the study. The authors thank the Northeast Dairy Foods Research Center (Ithaca, NY) for support of this research. The technical assistance of Chassidy Coon, Michelle Billota, and Sara Bova of Cornell University (Ithaca, NY) was greatly appreciated. Use of names, names of ingredients, and identification of specific models of equipment is for scientific clarity and does not constitute any endorsement of product by authors or Cornell University. The authors have not stated any conflicts of interest.