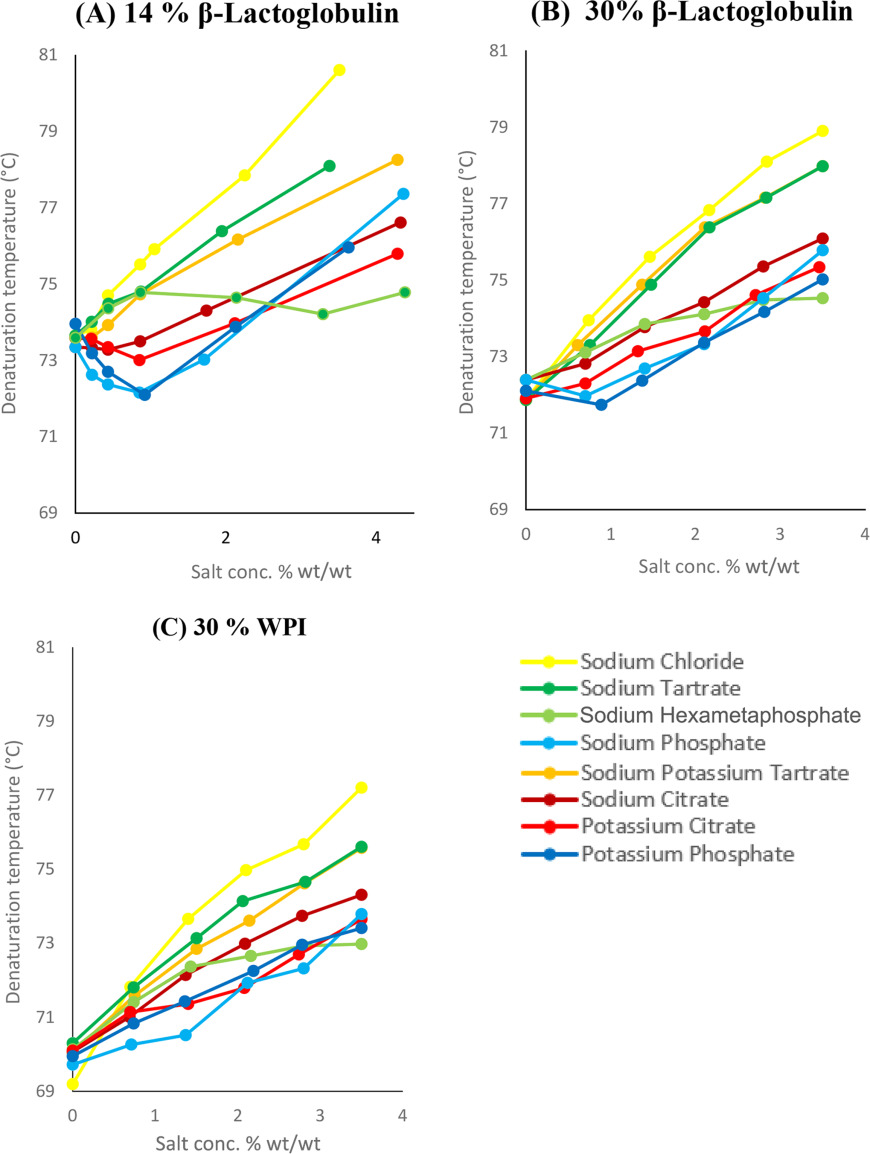 Salt solutions were prepared by mixing deionized (DI) water (Nortesur), NaOH, and KOH with salts (sodium hexametaphosphate) or acids (citric acid and KOH; tartaric acid and NaOH), or by mixing acids with salts (citric acid and sodium citrate, tartaric acid and sodium potassium tartrate) or by mixing 2 salts (mono- and disodium or potassium phosphates) in proportions to render solutions with the desired final salt concentration at a pH of 6.8 ± 0.1. Salts with no buffering capacity (i.e., NaCl, sodium thiocyanate, potassium iodide) were dissolved in water only, at the desired concentration.
Sample solutions were prepared by adding dry β-LG or WPI to water or the salt solution to the desired final concentration (not corrected for protein water or content of other small impurities). The β-LG and WPI solutions in water had a pH of approximately 6.8 and were not adjusted. Once the protein and solvent were mixed, the samples were left for 24 h at 4°C to completely dissolve and equilibrate. Sample pH was checked before use in all cases for WPI, and in a few cases for β-LG, to confirm that it remained at 6.8 (in the case of β-LG solutions that were not checked, we assumed that the pH remained close enough to 6.8 for our purposes). The IS of all solutions was calculated on a molal basis (moles of ions per kg of water).

The native to denatured state of the samples was determined by DSC using a DSC-60A Plus calorimeter equipped with a TA-60WS thermal analysis workstation and software (Shimadzu). An aluminum sealed pan (Cat# 201-53090) with about 20 mg of accurately weighed protein solution was used in each test; an empty pan was used as a blank.
Water or salt solutions (NaCl, sodium tartrate and sodium potassium tartrate, sodium and potassium citrates, sodium and potassium phosphates, and sodium hexametaphosphate) at concentrations of 3.5, 2.8, 2.1, 1.4 and 0.7 (wt/wt), and 30% (wt/wt) β-LG or WPI, or 14% (wt/wt) β-LG in a similar range of salt concentrations were analyzed. Thirty percent protein content was the highest concentration rendering a clear, liquid solution; 14% was the lowest concentration that consistently formed a gel during rheological testing.
The reported denaturation temperatures correspond to the minima in the endothermal peaks, as determined by the software, after correction for baseline drift. Because we were dealing with complex kinetic processes, it should be noted that at the denaturation temperature, part of the protein is denatured and part is not, and that denaturation temperatures change if the experiment conditions change (as detailed below for the heating rate). The thermograms were run from 25°C to 90°C, followed by 2 min at 90°C. Table 1 shows a selection of protein samples that were dispersed in water and run for several independently prepared sample replications to demonstrate the good reproducibility of the method.
Table 1Preliminary tests on the reproducibility of β-LG and whey protein isolate (WPI) denaturation temperature obtained by differential scanning calorimetry
The denaturation peak temperature depends on the heating rate (
de Wit and Swinkels, 1980
A differential scanning calorimetric study of the denaturation of bovine β-lactoglobulin.
Biochim. Biophys. Acta. 1980; 624: 40-50
;
Hoffmann et al., 1997
The suitability of scanning calorimetry to investigate slow irreversible protein denaturation.
Thermochim. Acta. 1997; 306: 45-49
https://doi.org/10.1016/S0040-6031(97)00298-0
). In a preliminary experiment using β-LG (30% wt/wt in water) at different heating rates (0.5, 1, 2, 5, 10, 15, and 20°C/min), the peak denaturation temperatures ranged from 73.3°C at a heating rate of 20°C/min to 67.8°C at a heating rate of 0.5°C/min, a temperature variation in accordance with previous reports (
de Wit and Swinkels, 1980
A differential scanning calorimetric study of the denaturation of bovine β-lactoglobulin.
Biochim. Biophys. Acta. 1980; 624: 40-50
). To keep results comparable, afterward all thermograms were run at 10°C/min (peak temperature slightly below 72°C in the previously mentioned experiment). Indium (melting point at 156.6°C) was used for calibration.

Effect of Temperature on pH

For pH measurements at temperatures higher than room temperature, a beaker containing the solution was heated slowly, with stirring, on a heated plate. The temperature and pH were measured using a AD1020 pH meter (ADWA Instruments), with the probes immersed in the solution. The pH electrode was calibrated before each run. The pH meter equipment made the necessary compensation for the different temperatures.

A rheometer (MCR 302, Anton Paar) equipped with a Peltier heating element and concentric cylinders (bob diameter: 26.66 mm, cup diameter: 28.92 mm) was used for all measurements. An oscillatory test was conducted with amplitude of 0.1%, frequency of 0.5 Hz, and temperature from 25 to 65°C at a rate of 8°C/min, 65 to 85°C at a rate of 1.0°C/min, followed by a holding time of 20 min at 85°C. In a standard experiment, 19 mL of 14% (wt/wt) WPI in water or different salt solutions were tested. Whey protein isolate at 14% (wt/wt) was the minimum concentration that consistently yielded a gel in our experimental conditions. Viscoelastic properties were determined by monitoring the storage (G′, Pa) and loss (G″, Pa) moduli as a response to the applied dynamic deformation. The temperature of gelation was arbitrarily defined as the temperature where G′ = 1 Pa (
Kavanagh et al., 2000
Heat-induced gelation of β-lactoglobulin/α-lactalbumin blends at pH 3 and pH 7.
Macromolecules. 2000; 33: 7029-7037
https://doi.org/10.1021/ma0005522
). Table 2 shows the results of several independently prepared sample replication runs of 14% (wt/wt) WPI dispersed in water (solvent A) or a 4.3% (wt/wt) sodium phosphate solution (solvent B) to demonstrate the good reproducibility of the method.
Table 2Reproducibility of whey protein isolate gelling temperature (i.e., temperature where storage modulus G′ = 1 Pa) under the experimental conditions of this study
1 Solvent A = deionized water; solvent B = sodium phosphate in water (4.3% wt/wt). Whey protein isolate content was 14% (wt/wt) in all cases.

Linear regression was used, when needed, to describe the relationship between denaturation temperatures and salt concentration. In Table 1, Table 2, standard definitions of standard deviation and coefficient of variation were employed.

The addition of emulsifying salts at pH values close to neutral resulted in a significant increase in denaturation temperature and gelling rate of β-LG. Except for sodium hexametaphosphate, the near linearity of the increase in denaturation temperature and the comparable slope shown by kosmotropic-type salts suggests similar salt–protein interactions. The addition of salts with good buffering capacity showed that even if the pH is the same for all solutions at room temperature, the pH at denaturation temperature changes according to the solution buffering capacity (which is affected by the protein and the salt). Our results also demonstrated that the native versus denatured state of whey proteins in protein drinks subjected to thermal processing close to HTST (72°C for 15 s) will be largely determined by the IS and buffering capacity of the system.

The authors acknowledge the support from Universidad Tecnológica del Uruguay (Montevideo, Uruguay). The authors have not stated any conflicts of interest.