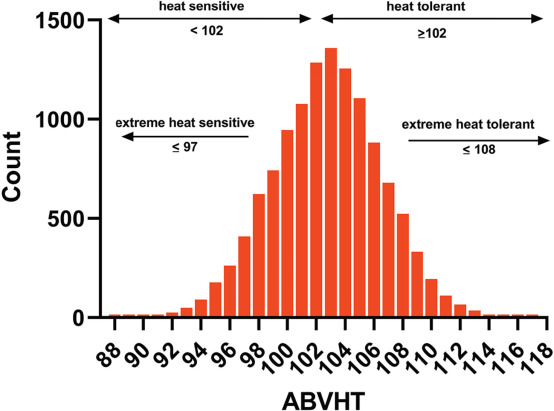 Heat stress has negative consequences for milk production and reproduction of dairy cattle. These adverse effects are likely to increase because of climate change and anticipated increases in milk yield. Some of the variation among cows in ability to resist effects of heat stress is genetic. The current objective of this observational study was to assess the effectiveness of the Australian breeding value for heat tolerance (ABVHT) based on the decline in milk yield with heat stress for predicting cow differences in effects of heat stress on regulation of body temperature, milk production, and reproductive function. Genomic breeding values for heat tolerance were calculated for 12,487 cows from a single California dairy farm. Rectal temperature in the afternoon (1100–2045 h) was measured on a subset of 626 lactating cows with ABVHT ≥102 (heat tolerant) or <102 (heat sensitive). Rectal temperature was 0.12°C lower for heat-tolerant cows than heat-sensitive cows. Vaginal temperatures were measured every 15 min for 5 d in 118 cows with ABVHT ≥108 (extreme heat tolerant) or <97 (extreme heat sensitive). Vaginal temperature was 0.07°C lower for extreme heat–tolerant cows than extreme heat–sensitive cows. Lactation records for 4,703 cows with ABVHT were used to evaluate seasonal variation in first 90-d milk yield, fat percent, and protein percent for each ABVHT quartile. Overall, cows with higher ABVHT had lower milk yield, fat percentage, and protein percentage and higher first service pregnancy rate. There was no summer depression in production or reproduction or interactions between season and ABVHT quartile. We observed that ABVHT can successfully identify heat-tolerant cows that maintain lower body temperatures during heat stress. The lack of a pronounced seasonality in milk production or reproduction precluded evaluation of whether ABVHT is related to the magnitude of effect of heat stress on those traits.

Climate change is a growing concern for food production systems across the globe. Historically hot regions are facing record high temperatures for longer periods, and a greater proportion of the globe is experiencing temperatures characteristic of heat stress (
IPCC, 2014

Data were collected from a commercial dairy farm in Riverdale, California (36°32′06.57′′ N 120°01′23.8′′ W; elevation 56.4 m). The dairy was chosen because it is in a hot region of the country and makes extensive use of genotyping necessary to calculate ABVHT. The cows were Holstein, milked twice daily, and housed in freestall barns with fans, soakers, and shade-cloth curtains for heat abatement. Fans were programmed to turn on at 20°C and increase in speed with increasing dry bulb temperature. Cows were cooled by 2-stage feed line soakers. Soakers turned on at a dry bulb temperature of 24°C for 30 s at 5-min intervals. When dry bulb temperature reached 29.5°C, the interval between 30 s of soaking was reduced to 3 min. Cows had access to outdoor dirt lots until 0200 h (night milking) to encourage cows to eat during the cooler night temperatures. The farm had 8 barns with 4 pens of ∼100 cows/barn. Data for this study were obtained from cows in 20 of the 32 pens, representing all 8 barns. None of the cows used for the study were from fresh pens or the hospital pen.
As of September 2020, the farm had a rolling herd average of 11,323 kg of milk with a 3.86% fat test and 3.15% protein test. Herd records were obtained from the farm and accessed using DHI-Plus (Amelicor). In addition to current herd records, archived records were used for production and reproduction analyses. The study was approved by the University of Florida Institutional Animal Care and Use Committee (Project 202010982).

The experiment was performed during 2 wk in August 2020. During the study, wildfires resulted in much denser smoke during wk 2. Of the 12,487 cows with ABVHT, 2,925 cows were in the herd at the time the experiment was initiated (of 3,613 lactating cows total). Rectal temperatures were measured once per cow over the span of the experiment using digital rectal thermometers from a total of 1,078 cows in the 30 min after they returned from milking (range of sampling time was 1100–2045 h). Cows were selected for measurements of rectal temperature at random and without an a priori knowledge of the ABVHT. A total of 452 cows were not genotyped; therefore, an ABVHT was not available. An ABVHT was calculated for the remaining cows (n = 626). The distribution of ABVHT values is shown in Figure 1. The average ABVHT was 102, and cows were divided into 2 groups for statistical analysis. Those cows with an ABVHT from 102 to 109 were termed heat tolerant (n = 354), and those with an ABVHT from 95 to 101 were termed heat sensitive (n = 272).
Cows used to measure vaginal temperature were selected from genotyped cows only and, in particular, from cows chosen to be the most heat tolerant (ABVHT ≥108; termed extreme heat tolerant) and least heat tolerant (ABVHT ≤97; termed extreme heat sensitive) on the farm (Figure 1). A blank controlled internal drug release (CIDR) containing an iButton 1922L (Maxim Integrated) was placed intravaginally for 5 d to record temperature every 15 min. The iButtons were set to 0.5°C accuracy. The experiment was performed with 40 extreme heat–tolerant cows and 23 extreme heat–sensitive cows in wk 1 and with a separate 26 extreme heat–tolerant cows and 29 extreme heat–sensitive cows in wk 2. Cows were milked at times ranging from 1100 to 1430 h and 2300 to 0230 h.
Dry bulb temperature and relative humidity were measured every 15 min for the duration of the study using Hobo U23 Pro v2 temperature and relative humidity data loggers (Onset) from the following 3 locations at the farm: exterior parking lot, the barn identified as the hottest by the farm manager, and the barn identified as the coolest. The THI was calculated using the following equation of
NRC, 1971
A Guide to Environmental Research on Animals.
Natl. Acad. Sci., 1971
:
THI = (1.8 × Tdb + 32) − [(0.55 − 0.0055 × RH) × (1.8 × Tdb − 26.8)],
where Tdb = dry bulb temperature (°C) and RH = relative humidity.

Distribution of ABVT and Genomic Correlations with Other Traits

Cows with a high heat tolerance breeding value had lower body temperatures under heat stress than cows with a low heat tolerance value. Thus, at least some genetic variants controlling resistance to thermotolerance in Australia control resistance to thermotolerance under other conditions. Furthermore, the ABVHT can identify heat-tolerant cows with superior ability to regulate body temperature under US conditions. Further studies with nationwide data will give insight as to the value of ABVHT for minimizing effects of heat stress on production and reproduction traits for US breeding programs. Moreover, the likelihood of genotype × environmental interactions means that calculation of breeding values for heat tolerance using US data would potentially be of even greater value.

The authors acknowledge Zoetis Animal Health (Kalamazoo, MI) and Mitchell Blanding for providing blank controlled internal drug releases, Zoetis Genetics for providing the genotypes, and Amelicor (Provo, UT) for providing access to DHI-Plus management software. Additionally, thanks are extended to DataGene (Melbourne, Australia) for calculating the ABVHT. Special thanks are also extended to Steve Maddox, Juan Garcia, Daniella Demetrio, and all personnel at Maddox Dairy (Riverdale, CA) for providing access to the cows, genotypes, and assistance in data collection. Research was supported by the Southeast Milk Checkoff Program and the L.E. “Red” Larson Endowment. L. M. Jensen is supported by the Doak Graduate Fellowship from the National Association of Animal Breeders. The authors have not stated any conflicts of interest.