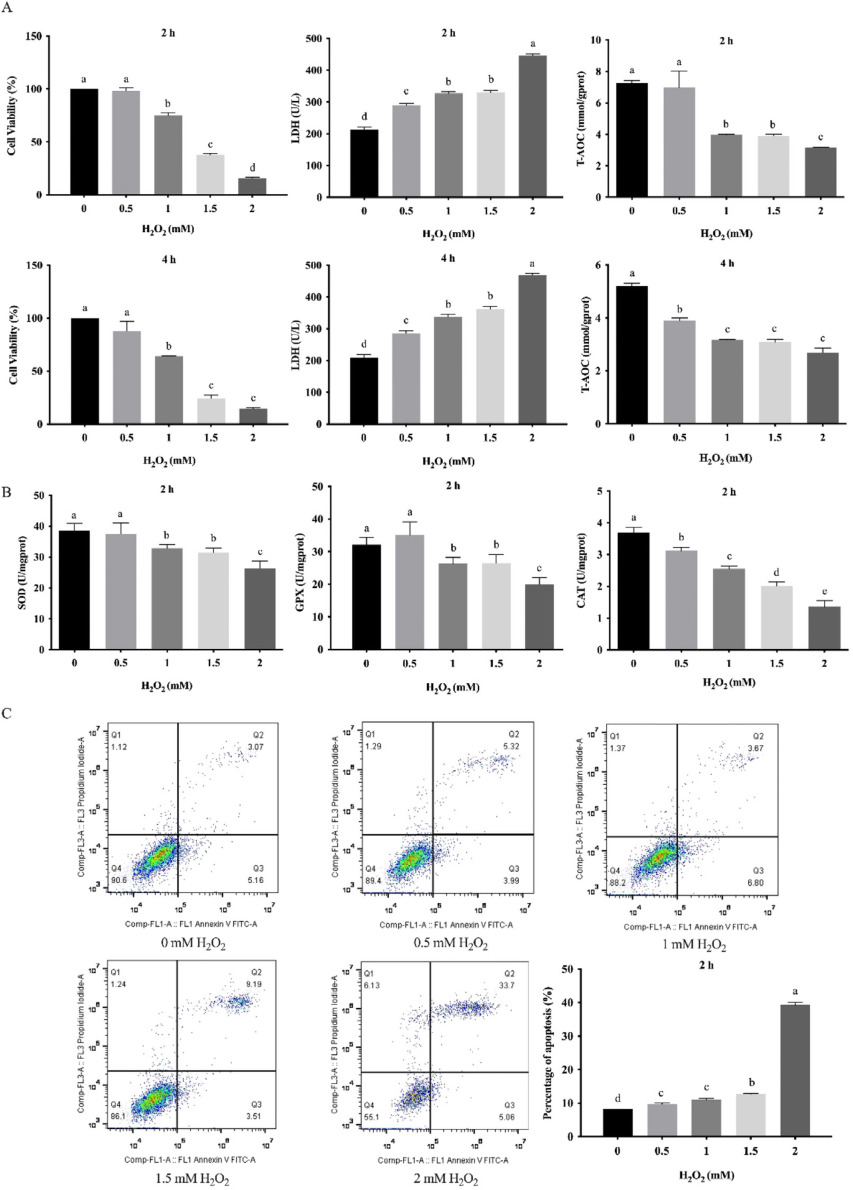 Amino acids are primarily absorbed in the ruminant small intestine, and the small intestine is a target organ prone to oxidative stress, causing intestinal disfunction. Previous study suggested that l-Trp could benefit intestinal function and production performance. This study aimed to explore the effects of l-Trp on hydrogen peroxide (H2O2)-induced oxidative injury in bovine intestinal epithelial cells (BIEC) and the potential mechanism. The effects of l-Trp on cell apoptosis, antioxidative capacity, AA transporters, and the mammalian target of rapamycin (mTOR) signaling pathway were evaluated in BIEC treated with 0.8 mM l-Trp for 2 hours combined with or without H2O2 induction. In addition, to explore whether the effects of 0.8 mM l-Trp on oxidative stress were related to mTOR, an mTOR-specific inhibitor was used. The percentage of apoptosis was measured using flow cytometry. The relative gene abundance and protein expression in BIEC were determined using real-time PCR and Western blot assay, respectively. Results showed l-Trp at 0.4 and 0.8 mM enhanced the cell viability, and it was inhibited by l-Trp at 6.4 mM. l-Tryptophan at 0.4, 0.8, and 1.6 mM remarkably decreased the percentage of apoptosis and enhanced antioxidative capacity in H2O2-mediated BIEC. Moreover, l-Trp at 0.8 mM increased the relative gene abundance and protein expression of antioxidative enzymes and AA transporters, and the mTOR signaling pathway. The mTOR inhibitor lowered the protein expression of large neutral amino acid transporter 1, but the inhibition of mTOR did not alter the activities of catalase and superoxide dismutase or protein expression of alanine-serine-cysteine transporter 2 with or without H2O2 induction. l-Tryptophan increased catalase and superoxide dismutase activities in H2O2-mediated BIEC, although not with a present mTOR inhibitor. l-Tryptophan increased the protein expression of large neutral amino acid transporter 1 and alanine-serine-cysteine transporter 2 in H2O2-mediated BIEC with or without the presence of an mTOR inhibitor. The present work suggested that l-Trp supplementation could alleviate oxidative injury in BIEC by promoting antioxidative capacity and inhibiting apoptosis, and the mTOR signal played vital roles in the alleviation.

Establishing an Oxidative Stress Model of BIEC Induced by H2O2

The effect of H2O2 on cell viability was determined using cell counting kit-8 (CCK-8) assay (C0042, Beyotime Biotechnology) in accordance with the manufacturer's protocol. In brief, BIEC were plated within 96-well culture plates (Corning) at the density of 104 cells/well and cultured for 24 h before treatment. After culturing for 2 and 4 h, respectively, the CCK-8 solution was added and incubated at 37°C for another 2 h. The absorbance was tested with a microplate reader at 450 nm. All values were expressed as a proportion of the control.

After stimulating by H2O2 at different concentrations for 2 and 4 h, the lactate dehydrogenase (LDH), an important indicator of cell membrane integrity, was determined using a commercial LDH assay kit (A020–2-2, Jiancheng Bioengineering Institute). The cell supernatant was gathered and added with solutions sequentially, and then incubated according to the instructions. After standing at room temperature for 5 min, the samples were tested at 450 nm using a microplate reader.

After incubation, the BIEC were rinsed with ice-cold PBS and lysed with RIPA Lysis Buffer R2220. Cells were centrifuged at 1,500 × g and 4°C for 15 min to remove cellular debris, and the cell supernatant was collected. Bicinchoninic acid protein assay reagent was used to determine cellular protein concentration (A045–4-2, Jiancheng Bioengineering Institute). The samples were added with solutions, incubated at 37°C for 30 min and tested at 450 nm. In addition, the intracellular total antioxidant capacity (T-AOC), the activities of superoxide dismutase (SOD), glutathione peroxidase (GPX), and catalase (CAT) were determined as detailed in our previous study (
Wei et al., 2019
Maternal nicotinamide supplementation during the perinatal period modifies the small intestine morphology and antioxidative status of offspring kids.
Anim. Feed Sci. Technol. 2019; 252: 41-50
https://doi.org/10.1016/j.anifeedsci.2019.04.003
). All data presented were normalized to protein concentration.

To measure the percentage of apoptosis of BIEC, the flow cytometry (FACS Calibur, Becton, Dickinson and Company) and Annexin V-FITC apoptosis assay kits (K101–100, Univ Biotech Company) were used. The BIEC were washed with cold PBS then fixed in binding buffer mixed with 5 μL of FITC Annexin V and 5 μL of PI. After being incubated in the dark at room temperature for 15 min, the cells were added with 400 μL of binding buffer then analyzed within 30 min. The cells located at right 2 quadrants of all plots were defined as the apoptotic cells, and the percentage of apoptotic cells were analyzed using the FlowJo-V10 software (BD).

Effect of l-Trp on BIEC Challenged by H2O2

Inhibition of mTOR in BIEC

To explore the association between mTOR and oxidative stress in BIEC with or without l-Trp supply, mTOR inhibition assays were carried out. The specific mTOR inhibitor rapamycin (Rapa, Selleck Chemicals) was dissolved in dimethylsulfoxide (Sigma-Aldrich) to produce a 10 mM stock solutions and stored at −80°C. Before applications in cell treatments, stock solutions were diluted to working concentrations. The treatments were control, Rapa, H2O2, H2O2 + Rapa, H2O2 + l-Trp, and H2O2 + Rapa + l-Trp. After 2 h treatments, the total RNA and proteins were separately collected for further analyses. Based on the study described previously, the dose of l-Trp used was 0.8 mM, and the Rapa used was 10 nM, which was selected based on a previous study (
Guo et al., 2018
Leucine affects α-amylase synthesis through PI3K/Akt-mTOR signaling pathways in pancreatic acinar cells of dairy calves.
J. Agric. Food Chem. 2018; 66 (29733580): 5149-5156
https://doi.org/10.1021/acs.jafc.8b01111
) and a previous dose response experiment in our laboratory.

The distribution of normality and homogeneity of variances was evaluated before the analysis. Next, the data were analyzed by one-way ANOVA, and Duncan's multiple comparison tests were used to compare group differences if a significant treatment effect was observed using SPSS 20.0 (SPSS Inc.). Data were expressed as mean ± the standard error of the mean. The significance level was P ≤ 0.05.

Effect of H2O2 on Oxidative Injury of BIEC

L-Tryptophan Regulated the Oxidative Stress of BIEC Mediated by H2O2

Financial support was received from the National Natural Science Foundation of China (32172742 and 32202688), the Natural Science Foundation of Zhejiang Province (LQ22C170002; China), the Cooperative Extension Plan of Major Agricultural Technologies of Zhejiang Province (2019XTTGXM02-3; China), and the Scientific Research Training Program of Zhejiang Agriculture and Forestry University (2021KX0118; China). We are grateful to all the members of Chong Wang's laboratory (Zhejiang A&F University, Zhejiang, China) for providing valuable assistance in sample measurement and data analysis, and to William E. Gregory (Northwest A&F University) for editing the English grammar. The authors have not stated any conflicts of interest.