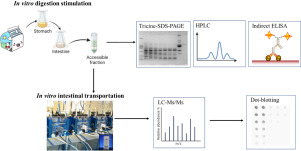 Open AccessPublished:October 25, 2022DOI:https://doi.org/10.3168/jds.2022-22287
Identification of immunoglobulin E epitopes on major allergens from dairy products after digestion and transportation in vitro
Previous ArticleAntibacterial activity and action target of phenyllactic acid against Staphylococcus aureus and its application in skim milk and cheese
Next ArticleGraduate Student Literature Review: Labeling challenges of plant-based dairy-like products for consumers and dairy manufacturers

Dairy processing can alter the digestion stability and bioavailability of cow milk proteins in the gastrointestinal tract. However, analysis of stable linear epitopes on cow milk allergens that could enter into intestinal mucosal is limited. Thus, this study aimed to investigate the digestion and transportation properties and residual allergen epitopes entering into gastrointestinal mucosa of 3 commercial dairy products, including pasteurized milk (PM), ultra-heat-treated milk (UHTM), and dried skim milk (DSM). In this work, the digestive stability of the 3 kinds of dairy products has been performed in a standard multistep static digestion model in vitro and characterized by Tricine-SDS-polyacrylamide gel electrophoresis and reversed-phase HPLC. With respect to gastrointestinal digestion in vitro, the main allergens including β-lactoglobulin (β-LG), α-lactalbumin (α-LA), and caseins were degraded gradually, and the resistance peptides remained in the PM with a molecular weight of range from 3.4 to 5.0 kDa. Simultaneously, the potential allergenicity of the cow milk proteins was diminished gradually and is basically consistent after 60 min of gastrointestinal digestion. After gastrointestinal digestion, the remaining peptides were transported via an Ussing chamber and identified by liquid chromatography-MS/MS. By alignment, 10 epitopes peptides were identified from 16 stable peptides, including 5 peptides (AA 92–100, 125–135, 125–138, and 149–162) in β-LG, 2 peptides in α-LA (AA 80–93 and 63–79), 2 peptides in αS1-casein (AA 84–90 and 125–132), and 1 peptide (AA 25–32) in αS2-casein were identified by dot-blotting mainly exist in UHTM and PM. This study demonstrates dairy processing can affect the digestion and transport characteristics of milk proteins and in turn alter epitope peptides release.

Four-week-old Brown Norway rats were purchased from Charles River [Beijing, China; Permission number “SYXK (Jing) 2016-0006”]. Mice were housed at 22 ± 2°C and 50% humidity. All mice were housed for at least 1 wk before conducting the experiments. All experiments were performed in strict accordance with the NCH guidelines from China for the care and use of laboratory animals (NHC Publication No.11, Rev. 2016) and approved by the Animal Care Committee of Nanchang University (Nanchang, China).

Digested products (15 μg) were loaded (per lane) on a Tricine-SDS-PAGE by using a discontinuous acrylamide containing 4, 10, and 16.5%. Then electrophoretic gel was separated under constant voltage of 30 V for 60 min, then 100 V for 120 min with Tris/Tricine buffer. The gels were immersed in a fixative solution containing ethanol, acetic acid, and water (4:1:5 vol/vol/vol) for 20 min and then stained with Coomassie Blue R-250. The picture of gels detected by Gel Documents System (G:Box F3; Syngene).

The sera were pooled from 10 patients allergic to cow milk (Supplemental Table S2, https://figshare.com/articles/figure/Appendices_docx/20335143;
Yang, 2022
Appendices.docx. Figshare. Figure.
https://doi.org/10.6084/m9.figshare.20335143.v3
Date: 2022
), which was purchased from PlasmaLab International. Ethical approval from the Second Affiliated Hospital of Nanchang University was obtained for the study. The IgE binding capacity of digests was analyzed by indirect ELISA. Briefly, cow milk protein or digests diluted in 0.05 M carbonate buffer (pH 9.6) was coated to a 96-well microtiter plate at 4°C overnight (0.2 μg/well). The next day, the plate was washed 3 times with PBS containing 0.05% Tween 20 (PBST). Each well was blocked for 1 h at 37°C with 3% gelatin (250 μL/well) in PBS. Antisera with a dilution of 1:20 were added and incubated for 1 h at 37°C. Then, the plate was washed, and 100 μL of HRP-labeled antihuman IgE diluted to 1:5,000 was added to the wells and incubated at 37°C for 1 h. After washing again, the color was developed with 3,3',5,5'-tetramethylbenzidine (NeoBioscience). The reaction was terminated by adding 50 μL of 2 M sulfuric acid per well. Absorbance was determined at 450 nm with an ELISA plate reader (Varioskan LUX; Thermo Scientific).

The Ussing chamber (EM-CSY5–8, Physiology Instruments) was used for transepithelial transport studies. First, a section of jejunum was collected from 2 rats both in the sensitized group and the control group for each sample transportation (Supplemental Figure S1, https://figshare.com/articles/figure/Appendices_docx/20335143;
Yang, 2022
Appendices.docx. Figshare. Figure.
https://doi.org/10.6084/m9.figshare.20335143.v3
Date: 2022
). These tissues were carefully incubated in Kreb's solution (Supplemental Table S3, https://figshare.com/articles/figure/Appendices_docx/20335143;
Yang, 2022
Appendices.docx. Figshare. Figure.
https://doi.org/10.6084/m9.figshare.20335143.v3
Date: 2022
) and were then carefully separated from underlying tissue using forceps and surgical scissors. Separated intestinal epithelial tissues were immersed in Kreb's solution and bubbled with carbogen gas (95% O2/5% CO2) before being fixed in Ussing chamber inserts (P2313, Hugo Sachs Elektronik, Harvard Apparatus GmbH), exposing 0.71 cm2 of the surface to 5 mL of Kreb's solution and was kept at 37°C under constant carbogen gassing. After a 10 min equilibration period, the digests (1 mg/mL) from the stomach digestion for 60 min at pH 2.0 and followed with duodenum digestion for 60 min, were added to the mucous lateral chamber. After 3 h, all the transport products in the chamber at the side of the basolateral membrane were collected. The collected transport products were stored at −20°C for further detection.

The 16 candidate epitopes peptides in Supplemental Table S4 (https://figshare.com/articles/figure/Appendices_docx/20335143;
Yang, 2022
Appendices.docx. Figshare. Figure.
https://doi.org/10.6084/m9.figshare.20335143.v3
Date: 2022
), which were both located in reported linear epitopes and the collected transported stable peptides by LC-MS/MS, were synthesized. Synthetic peptides were provided by Sangon Biotech Co. Ltd. (Shanghai, China) and stored at −20°C until use. The purity (>95%) was assayed by both reversed-phase HPLC and MALDI-TOF MS.

For the dot-blot assay, the sera were pooled from 10 patients allergic to cow milk (Supplemental Table S2), which were purchased from PlasmaLab International (Everett, WA). An aliquot of the peptide fractions (0.5 μg) was spotted on a 0.22 μm Transblot nitrocellulose membrane (Bio-Rad) and dried at 37°C. The negative control was 0.5 μg of BSA (Sigma) incubated with sera from the infant with the allergy. The membranes were blocked with 3% gelatin (Sigma) in Tris-buffered saline (TBS) for 1 h at 37°C. The membranes were then incubated overnight at 4°C with the sera from allergic individuals diluted 1/20 in TBS with 0.05% Tween 20 (TBS-T). After washing with TBS-T, the monoclonal biotin-conjugated antihuman IgE antibody (Sigma) in TBS (1/2,000) was incubated with the membrane for 1 h at 37°C. After washing with TBS-T, monoclonal peroxidase-conjugated avidin (NeoBioscience) in TBS (1/60) was incubated with the membrane for 1 h at 37°C. The membrane was extensively rinsed with TBS-T (5 × 3 min). Enhanced chemiluminescence reagents (ECL Plus reagent, Bioscience) were used for visualizing the immunoreactive peptide spots at various exposure times.

Mapping of Epitopes on Allergens

The 3-dimensional structure of the β-LG and α-LA was based on the crystallographic structure with the Protein Data Bank identity of 1BSO and 6IP9, respectively. The structure of αS1-CN (UniProt ID: P02662) and αS2-CN (UniProt ID: P02663) were predicted by the online software I-TASSER (https://zhanggroup.org//I-TASSER/). Those allergens' structures with gray color were generated with the PyMol visualization software (PyMOL Molecular Graphics System, version 4.6, Schrödinger). And other color belongs to the epitope peptides mapping within the allergen structure.

Analysis of Cow Milk Peptides from Gastrointestinal Digestion and Transport

Peptides were released after 60 min of gastric digestion plus 60 min of intestinal digestion and then identified by LC-MS/MS (Supplemental Table S5, https://figshare.com/articles/figure/Appendices_docx/20335143;
Yang, 2022
Appendices.docx. Figshare. Figure.
https://doi.org/10.6084/m9.figshare.20335143.v3
Date: 2022
). Consistent with the number of peptides for each allergenic protein, peptides generated after gastrointestinal digestion covered more than 20% of the protein sequences of β-LG, αS1-CN, and αS2-CN (Figure 3). In contrast, the peptide sequence coverage rate of α-LA, β-CN, and κ-CN were generally lower than 20%, indicating that these allergens are sensitive to gastrointestinal digestion (Figure 3). Especially, α-LA cannot be detected in the digests of DSM after simulated gastrointestinal digestion in vitro.
To study the transepithelial transport, in vitro digests sampled after 60 min of gastric digestion followed by 60 min of intestinal digestion were applied to intestinal transportation and analyzed by LC-MS/MS (Supplemental Tables S6 and S7, https://figshare.com/articles/figure/Appendices_docx/20335143;
Yang, 2022
Appendices.docx. Figshare. Figure.
https://doi.org/10.6084/m9.figshare.20335143.v3
Date: 2022
). The intestine was separated from 2 rats in each group (Supplemental Figure S1). The number of allergen peptides found in gastrointestinal digests for each sample was more than the transported products (the total peptides of PM were 31/15, UHTM were 28/16, and DSM were 32/2). Furthermore, the length distribution of peptides in the transport products appears to be shorter compared with gastrointestinal digests (Figure 4). Considering that intestinal brush border enzymes are localized in the intestinal epithelium (
Picariello et al., 2015
Role of intestinal brush border peptidases in the simulated digestion of milk proteins.
Mol. Nutr. Food Res. 2015; 59 (25688850): 948-956
https://doi.org/10.1002/mnfr.201400856
), therefore, those allergen peptides derived from gastrointestinal digests could be further broken down as they pass through the intestinal epithelium. The number of allergen peptides in transported products of the sensitized group was more than the control group (the total peptides of PM were 15/6, UHTM were 16/2, and DSM were 2/1), suggesting the intestinal permeability was increased in cow milk sensitized rats. It is noted that peptide AA 76–83 (TKIPAVFK) of β-LG was stable exist in the gastrointestinal digestion and transport products, and its shortened form, AA 78–83 (IPAVFK) could be transported across the intestinal barrier of the control group and DSM sensitized group.
According to previous studies on cow milk allergens' epitopes, we obtained the digestion and transported stable peptides from the PM, UHTM, and DSM as the IgE binding epitopes candidates (Table 1). In the sensitized groups of PM, UHTM, and DSM, the potentially allergenic peptides derived from β-LG, α-LA and caseins could stably exist in the process of digestion and transportation, including β-LG (AA 41–60, 61–69, 76–83, 84–91, 92–100, 125–135, 125–138 and 142–148), α-LA (AA 80–93, 99–108 and 115–122), αS1-CN (AA84–90) and αS2-CN (AA 25–32) for PM; β-LG (AA 61–69, 76–83, 125–135, 125–138 and 142–148), α-LA (AA 63–79, 80–93, 99–108 and 115–122), αS1-CN (AA 84–90 and 125–132) and αS2-CN (AA 25–32 and 71–76) for UHTM; β-LG (AA 78–83, 92–100) for DSM. Overall, the peptides derived from the main allergens in PM were similar to UHTM during gastrointestinal digestion and transportation. In addition, there was a small range of peptides and only one epitope presented in the transported products of DSM.
Table 1Location of reported IgE epitopes and peptides on bovine major allergens that survived in digestion and transportation
1 Protein supplement: PM = pasteurized milk; UHTM = ultra-heat-treated milk; DSM = dried skim milk.

In the present study, we found that the pepsin-sensitive caseins in DSM showed more stable in vitro digestion. Both α-LA and β-LG also in PM and DSM showed a stronger resistance to gastric digestion, compared with the sample in UHTM. As the major allergens, they contributed to the higher allergenicity of processed dairy products. Based on the sequence alignment, we found 16 stable peptides during digestion and transportation in vitro, and 10 of them were identified by dot-blot with allergic sera in infants. Among them, 5 peptides derived from β-LG, whereas 2 peptides were in both α-LA and αS1-CN, respectively, and one peptide belonged to αS2-CN. These 10 peptides mainly existed in PM or UHTM, and only one peptide was presented in DSM. However, future study is needed to design appropriate in vivo bioavailability assays to track the metabolic fate of those proteins and to validate the milk-derived peptides actually involved in allergic reactions.

This research was funded by the National Natural Science Foundation of China (no. 31760431 and 32072241). The authors have not stated any conflicts of interest.