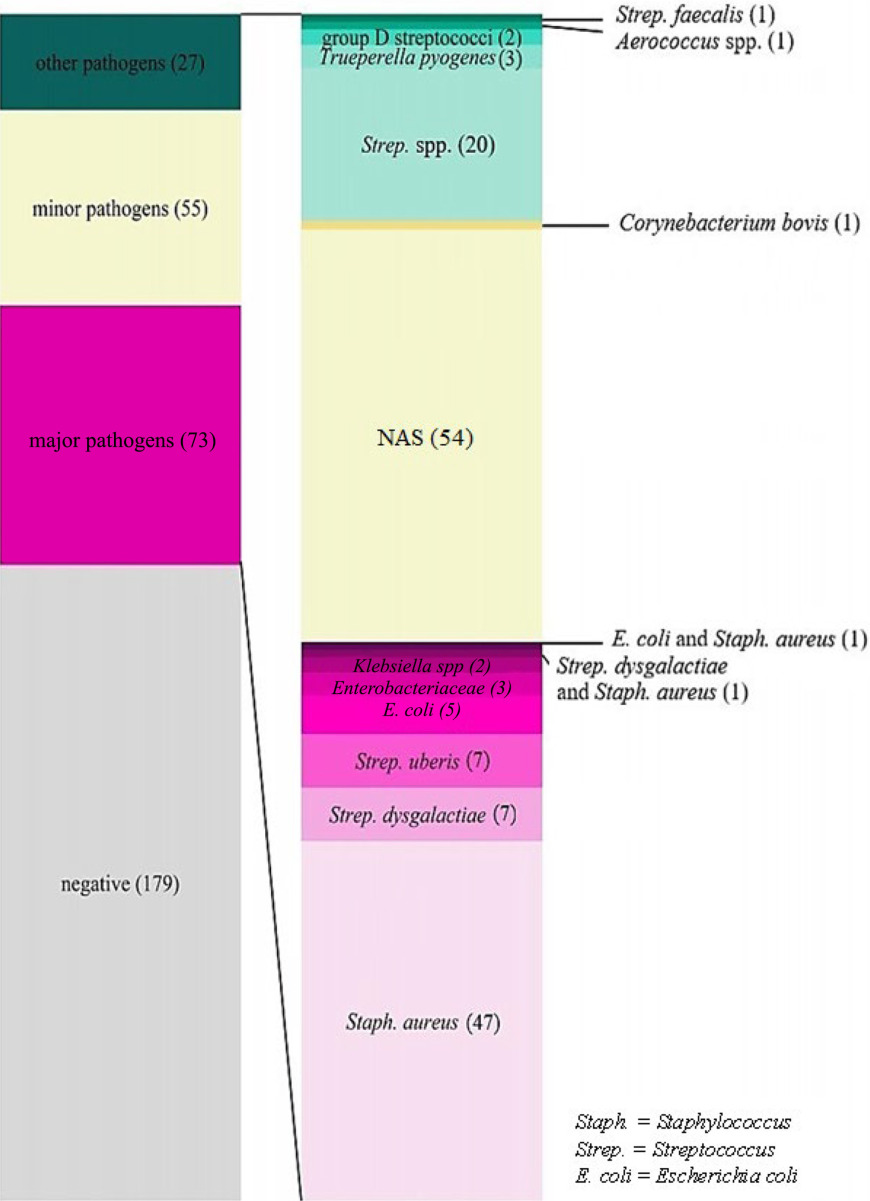 The effect of antibiotic versus no treatment at dry-off on udder health and milk yield in subsequent lactation: A retrospective analysis of Austrian health recording data from dairy herds

Open AccessPublished:November 01, 2022DOI:https://doi.org/10.3168/jds.2022-21790
The effect of antibiotic versus no treatment at dry-off on udder health and milk yield in subsequent lactation: A retrospective analysis of Austrian health recording data from dairy herds
Previous ArticleResponsible antibiotic use labeling and consumers' willingness to buy and pay for fluid milk
Next ArticleEffect of mechanical premilking stimulation on milking duration in late lactation

Bovine mastitis is the most commonly diagnosed disease of dairy cows worldwide and causes extensive economic losses to milk producers. Intramammary infection status before dry-off plays a decisive role with respect to udder health and milk yield in the subsequent lactation. The aim of this study was to compare the effect of antibiotic dry cow therapy (DCT) versus no treatment at dry-off on milk yield, somatic cell count (SCC), inflammation of the mammary gland (IMG), and the incidence of clinical mastitis in the subsequent lactation. Dairy herd data from 251 Austrian dairy farms were recorded over an observation period of 12 mo and subsequently analyzed. The data set included 5,018 dairy cows: 2,078 were treated with antibiotics (abDCT group) and 2,940 were not treated (noDCT group) at dry-off. The abDCT group was subdivided, based on the antimicrobial active substances used for drying off, into 4 different groups (penicillins, cloxacillin, cephalosporins and rifaximin). Based on bacteriological culture results, infections were grouped into those caused by major, minor, and other pathogens. Additionally, the IMG was defined via SCC from milk recording data using a cutoff of 200,000 cells/mL before drying off and after calving. The incidence of clinical mastitis cases within 30 and 90 d in milk was calculated using veterinary diagnosis data. To investigate the effect of different dry cow therapies on the following parameters: milk yield, SCC, and diagnosed clinical mastitis cases, different linear mixed models were constructed. Overall, the abDCT group was determined to have a significantly higher milk yield over 305 d in milk in the subsequent lactation (increase of 6.18%), compared with the noDCT group (increase of 4.29%). Both groups (abDCT and noDCT) demonstrated a decrease in the first SCC after calving compared with the SCC before dry-off, although the treated cows had a significantly higher reduction. Regarding the different antibiotic groups, with exception of the rifaximin treated cows, all antibiotic groups showed a significant difference from not treated cows with respect to SCC. Additionally, we were able to demonstrate that cows with IMG before dry-off had a 2.073 times higher chance of an increased SCC (>200,000 cells/mL) after calving. With respect to the veterinary diagnosis data, neither the IMG before drying off nor the type of DCT had a significant influence on the probability of developing clinical mastitis within 30 or 90 d in milk. Only a small number of treatments was accompanied with a bacteriological examination before drying off. However, the existing data in this study indicates that the intramammary infection status before dry-off in combination with different dry cow treatments influences udder health and milk yield after calving. Nevertheless, further studies with larger data sets of bacteriological examinations are necessary to enable a more in-depth investigation into the effects of different antibiotic substances used for DCT.

In total 2,078 dairy cows were treated with antibiotics before drying off, and 2,940 were not treated at that time. Not all of the 5,018 dairy cows had a complete data set. Supplemental Table S1 shows the respective number of dairy cows included for every model calculated.

Dairy cows in the abDCT group had a higher mean 305 DIM lactation milk yield before dry-off, than those of the noDCT group (8,618 vs. 8,514 kg). Among the 1,380 cows considered in model 1, the 747 animals without antibiotic dry-off had a mean log10 MYR of 0.018 (corresponding to an increase of 4.29% of milk yield in the following lactation period) and the 633 abDCT cows had a mean log10 MYR of 0.026 (increase of 6.18%). According to model 1, abDCT has a very small but statistically significant (P = 0.018) positive effect on the milk yield ratio (Table 2). Investigating the different antibiotic groups separately in model 1a, none of them had a significant influence on the milk yield ratio (Supplemental Table S2, https://phaidra.vetmeduni.ac.at/o:1160 ). Parity and SCC after calving significantly affected the MYR (P < 0.01) in both models (1 and 1a). Regarding the log10 MYR, there seems to be a huge variation among animals independently from the IMI status and independently from the chosen antibiotic (Supplemental Figure S1, https://phaidra.vetmeduni.ac.at/o:1155 ).
Table 2Model 1 final: Results from general linear mixed model testing the association between milk yield ratio and antibiotic dry cow therapy in 1,380 cows from 237 dairy farms
1 Significance was declared at P < 0.05.
2 Intercept = milk yield ratio was the reference category, calculated using the milk yield in 305 DIM from the milk recording data before and after dry cow therapy.
3 abDCT(yes-no) = antibiotic or nonantibiotic dry cow therapy.
4 log10(SCCa) = SCC from the first milk recording data after calving.

Among the 1,380 animals used in model 2, the median value of the SCC in the last milk recording before dry-off was 98,000 cells/mL (40,000 cells/mL after calving) in the noDCT group and 112,000 cells/mL (26,000 cells/mL after calving) in the abDCT group. The first milk recording after calving took place on average on d 25 postpartum (for both groups), the time period for the last SCC from milk recording data before dry-off was on average 70 d (71 d for the abDCT group and 69 d for the noDCT group, on average). The mean log10 CCR of the noDCT group was −0.284 (corresponding to a decrease of 48.04%), whereas it was −0.518 (decrease of 69.68%) in the abDCT group. According to model 2, abDCT cows had a significantly (P < 0.001) higher reduction of the SCC compared with noDCT cows (Table 3). Analyzing antibiotic groups separately showed that each of the antibiotic groups (in addition to rifaximin) led to a significantly higher reduction in SCC than among noDCT cows (Supplemental Table S3, https://phaidra.vetmeduni.ac.at/o:1161 ). Comparing bacteriological results, there were only slight differences in the CCR between noDCT and abDCT (Supplemental Figure S2, https://phaidra.vetmeduni.ac.at/o:1156 ).
Table 3Model 2 final: Results from general linear mixed model testing the association between cell count ratio and antibiotic dry cow therapy in 1,380 cows from 237 dairy farms
1 Significance was declared at P-values <0.05.
2 Intercept = cell count ratio was the reference category, calculated using the SCC from the last milk recording data before dry cow therapy and the first SCC after calving.
3 abDCT(yes-no) = antibiotic or nonantibiotic dry cow therapy.
4 sqrt (milk yield before) = square root from the milk yield in 305 DIM from the milk recording data before dry cow therapy.

Results of bacteriological cultures from quarter milk samples before drying off were available for 334 cows. Milk samples were submitted on average 87 d before calving. The most frequently detected udder pathogens were NAS (n = 52, 33.55% of all positive samples) and Staph. aureus (n = 47, 30.32%, Figure 1). Veterinary diagnosis data on occurring mastitis cases were available from 232 (69.46%) cows, of which 12 were diagnosed with clinical mastitis within 30 DIM, and 22 within 90 DIM after calving (for proportions grouped by bacteriological result and treatment, see Supplemental Figures S3 and S4, https://phaidra.vetmeduni.ac.at/o:1157 ). Supplemental Figure S5 ( https://phaidra.vetmeduni.ac.at/o:1158 ) demonstrates the IMG status (healthy, newly infected, cured, chronically infected), based on the SCC from milk recording data in combination with the bacteriological culture results and DCT strategy. Of 234 cows with both SCC data and bacteriological culture results before dry-off, 69 cows (32.91%) had an SCC value of more than 200,000 cells/mL in the last milk recording data before dry-off. In 31 dairy cows, the bacteriological analysis was negative before dry-off, in 26 a major pathogen was detected, in 12 a minor pathogen, and in 8 dairy cows an infection with other pathogens. The highest number of cases with an SCC of >200,000 cells/mL before and <200,000 cells/mL after calving (cured) including bacteriological findings before dry-off, had received cloxacillin DCT, with 12 cows in the group of the major pathogens (Supplemental Figure S5). Cloxacillin was the most commonly used antibiotic DCT formulation among animals where a bacteriological culture was also available.

Dairy cows dried off with antibiotics were found to have an improved MYR and CCR compared with the nontreated group, however the data also showed that only a small number of bacteriological examinations were performed before dry-off and a relatively large proportion of the dairy cows with negative bacteriological cultures or low SCC before dry-off were still dried off with antibiotics. This is neither in line with the Austrian government recommendations to reduce antibiotic treatment in livestock nor in line with a responsible and targeted use of antimicrobial agents. Nevertheless, the analyzed data in this survey, which was based on a convenience sample of farmers and veterinarians, are not necessarily representative of treatment and drying off practices nationwide. Due to the extremely large proportion of cows dried off with cloxacillin, no conclusions could be made with respect to the comparative efficacy of the 4 antibiotic groups. Further studies with larger data sets of bacteriological examinations are necessary to enable an in-depth investigation into the effects of different dry cow antibiotic formulations.

The laboratories, farmers, and veterinarians engaged in the project are gratefully acknowledged for their cooperation, active participation, and sharing of data. Data recording and preliminary analyses were supported by the Comet-Project ADDA—Advancement of Dairying in Austria. The present study was supported by the Comet-Project D4Dairy – Digitalization, Data integration, Detection and Decision support. ADDA was and D4Dairy is supported by the Austrian Federal Ministry Republic of Austria for Climate Action, Environment, Energy, Mobility, Innovation and Technology (BMK, Vienna, Austria), the Austrian Federal Ministry Republic of Austria Digital and Economic Affairs Research and Economy (BMDW, Vienna, Austria), the province of Lower Austria, and the city of Vienna, within the framework of COMET—Competence Centers for Excellent Technologies. The COMET program is managed by the Austrian Research Promotion Agency (FFG, Vienna, Austria). The authors have not stated any conflicts of interest.