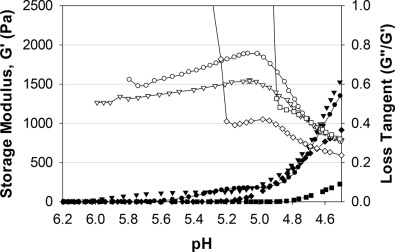 High protein levels in yogurt, as well as the presence of denatured whey proteins in the milk, lead to the development of firm gels that can make it difficult to formulate a fluid beverage. We wanted to prepare high-protein yogurts and explore the effects of using micellar casein isolate (MCI), which was significantly depleted in whey protein by microfiltration. Little is known about the use of whey protein-depleted milk protein powders for high-protein yogurt products. Microfiltration also depletes soluble ions, in addition to whey proteins, and so alterations to the ionic strength of rehydrated MCI dispersions were also explored, to understand their effects on a high-protein yogurt gel system. Yogurts were prepared at 8% protein (wt/wt) from MCI or nonfat dry milk (NDM). The NDM was dispersed in water, and MCI powders were dispersed in water (with either low levels of added lactose to allow fermentation to achieve the target pH, or a high level to match the lactose content of the NDM sample) or in ultrafiltered (UF) milk permeate to align its ionic strength with that of the NDM dispersion. Dispersions were then heated at 85°C for 30 min while stirring, cooled to 40°C in an ice bath, and fermented with yogurt cultures to a final pH of 4.3. The stiffness of set-style yogurt gels, as determined by the storage modulus, was lowest in whey protein-depleted milk (i.e., MCI) prepared with a high ionic strength (UF permeate). Confocal laser scanning microscopy and permeability measurements revealed no large differences in the gel microstructure of MCI samples prepared in various dispersants. Stirred yogurt made from MCI that was prepared with low ionic strength showed slow rates of elastic bond reformation after stirring, as well as slower increases in cluster particle size throughout the ambient storage period. Both the presence of denatured whey proteins and the ionic strength of milk dispersions significantly affected the properties of set and stirred-style yogurt gels. Results from this study showed that the ionic strength of the heated milk dispersion before fermentation had a large influence on the gelation pH and strength of acid milk gels, but only when prepared at high (8%) protein levels. Results also showed that depleting milk of whey proteins before fermentation led to the development of weak yogurt gels, which were slow to rebody and may be better suited for preparing cultured milk beverages where low viscosities are desirable.

The yield stress values of stirred yogurt samples were measured with disposable rheology cups after undisturbed storage for up to 4 wk. These yield stress measurements were made directly from their storage containers by inserting a vane geometry—rather than traditional measurements, which involve the transfer of sample from a storage container to the rheometer cup or plate—and so provide an almost undisturbed view of the rheology of aged, stirred yogurt. Yield stress values (Figure 4) for stirred yogurt samples further suggested that ionic composition may also play an important role in the rebodying process. The G′ values of stirred samples (Figure 5) were measured using a more traditional cup-and-bob measurement system (wherein the stirred yogurt samples were shaken to fluidize the sample and allow for its transfer to a rheology cup). Both yield stress and G′ values showed differences in gel stiffness initially after stirring (1 d) as well as different rates of growth of the dynamic moduli during storage, which were influenced by the ionic environment. The MCI dispersed in water (MCI-LL and MCI-HL) had the lowest initial and stored (4-wk) yield stress and G′ values, indicating slower rearrangement of bonds in these samples made with lower concentrations of soluble salts. The yogurts made from MCI dispersed in UF permeate and NDM experienced much more rapid rebodying, likely promoted by the higher concentration of milk salts present.
The dG′/dt values (Figure 5b, d) also indicated faster rebodying in the yogurts made with MCI-UF and NDM, suggesting that much of the elastic character of these gels that contributed to a resistance to flow (i.e., yield stress) likely reformed very soon after disruption of the gel network. It was not clear from this study whether differences in rebodying rates were a result of general ion interactions or perhaps specific ion interactions, such as those observed in the Hofmeister series or divalent ion (Ca2+) bridging between protein aggregates. It is possible that Ca bridging occurs at yogurt pH values (∼4.3–4.6), as so-called caseinate calcium remains bound to casein residues at pH values as low as pH ∼3.5 (
White and Davies, 1958
The relation between the chemical composition of milk and the stability of the caseinate complex. I. General introduction, description of samples, methods and chemical composition of samples.
J. Dairy Res. 1958; 25: 236-255
https://doi.org/10.1017/S0022029900009249
;
Le Graet and Brulé, 1993
Les équilibres minéraux du lait: Influence du pH et de la force ionique [Effects of pH and ionic strength on distribution of mineral salts in milk].
Lait. 1993; 73: 51-60
https://doi.org/10.1051/lait:199312
). It is possible that with higher levels of Ca, as with MCI-UF and NDM, more Ca could be involved in crosslinking or bridging neighboring casein strands together in stirred yogurt. The general ion interactions may also contribute to charge shielding and would be enhanced at higher salt levels, which would likely strengthen hydrophobic interactions. Regardless of whether Ca2+ bridging or hydrophobic interactions were responsible for the rebodying observed, all evaluated samples showed an increase in yield stress values over time. Samples with high ionic strength (MCI-UF and NDM) exhibited more rebodying (higher yield stress values), and the rebodying rate did not appear to be greatly affected by the amount of denatured whey proteins present in the system.
Because of the disruption to samples that can result from the stirring and dilution of yogurt that was necessary to load samples onto the particle size analyzer, particle size measurements of stirred yogurt should only be used to approximate the degree of aggregation of protein clusters in the gel, rather than try to represent the exact size of individual particles in the stirred, weak gel. Over time, an increase in protein aggregation was expected, as the low pH and ambient temperature continued to promote electrostatic and hydrophobic interactions between protein clusters. Unlike the large increase in yield stress values observed during storage, only a marginal increase in particle size occurred after aging for 4 wk for yogurts made from MCI dispersed in water, regardless of lactose levels (Figure 6a, b). Stirred yogurt prepared from NDM exhibited the largest initial D[4,3] particle size, and the D[4,3] values greatly increased at 4 wk, which highlighted the more dynamic protein aggregation process that was present after stirring for NDM samples. Much of the increase in particle size during storage involved clusters between 100 and 1,000 μm.
The greater propensity for rearrangements during storage for stirred yogurts made from NDM—as reflected in the large increases in particle size, yield stress, and G′ values—likely promoted the greater expulsion of serum (water) that would otherwise be trapped within the gel (Figure 7). This would agree with models for syneresis that suggest that endogenous syneresis pressure or rearrangements were partly responsible for the expulsion of whey from casein gels (
van Vliet et al., 1997
Rearrangements in acid-induced casein gels during and after gel formation.
in: Dickinson E. Bergenstahl B. Food Colloids: Proteins, Lipids, and Polysaccharides. Woodhead Publishing, 1997: 335-345
). As protein strands within the gel break and reform, the strands would assume a more energetically favorable conformation (i.e., shorter strands with decreased tensile stress), which causes the gel to contract, leading to an increase in endogenous pressure. This is noteworthy because confocal images and permeability measurements of set-style yogurt (Figure 3) indicated that NDM created the most crosslinked gels (i.e., low permeability and smooth or fine microstructure). However, once the initial gel microstructure was disrupted by stirring, the denatured whey proteins, which initially had helped to create a crosslinked and stable set-style gel, instead produced the least stable gel with high syneresis due to their strong propensity for bond reformation.

High-protein milk dispersions with low ionic strength (MCI-LL and MCI-HL) formed yogurt gels at high pH values (pH ∼6.0) and were very stiff at pH 4.6. These whey protein-diminished gels exhibited much higher G′ values than those observed for heated NDM. Milk protein dispersions prepared at 3% protein were less impacted by alterations in the ionic environment, which suggested that charge shielding and close packing of protein particles were at least partly responsible for the different gel properties observed in high-protein acid milk gels rehydrated in various dispersants. Alteration of the ionic strength of MCI dispersions (or possibly other milk protein isolates that have been extensively diafiltered) could be used by manufacturers to manipulate the texture of high-protein yogurts. Stirred yogurts made with MCI and dispersed in water (low ionic strength) exhibited low yield stress and a slow rate of rebodying, both of which would be desirable for drinkable yogurt products.

The authors thank Arla Foods (Viby J, Denmark) for funding this research. We also thank the staff at the Center for Dairy Research (Madison, WI) for their assistance, as well as the Biochemistry Optical Core (University of Wisconsin–Madison) for their help with the confocal microscope. The authors have not stated any other conflicts of interest.