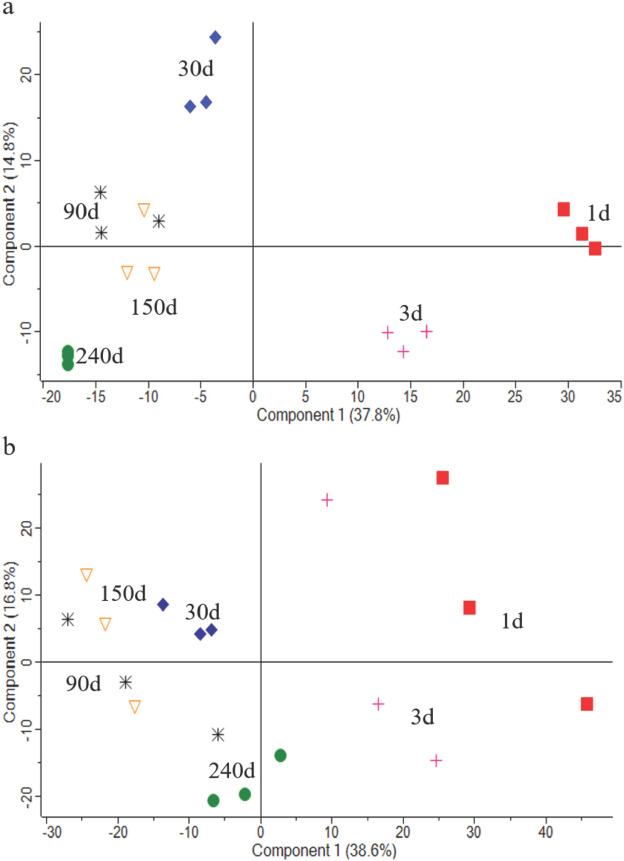 Open AccessPublished:November 21, 2022DOI:https://doi.org/10.3168/jds.2022-21800
Comparative analysis of changes in whey proteins of goat milk throughout the lactation cycle using quantitative proteomics
Previous ArticleVoluntary heat stress abatement system for dairy cows: Does it mitigate the effects of heat stress on physiology and behavior?
Next ArticleEconomic losses associated with mastitis due to bovine leukemia virus infection

The composition and content of goat milk proteins are affected by many factors and have been extensively studied. However, variation in whey protein composition in goat milk throughout the lactation cycle has not been clarified. In the current study, 15 dairy goats were selected, and milk samples were collected at 1, 3, 30, 90, 150, and 240 d after delivery. Whey proteins were separated and digested and then identified using data-independent acquisition (DIA) and data-dependent acquisition proteomics approaches. Protein profiles identified using DIA were consistent with those of the data-dependent acquisition proteomics approach according to clustering and principal component analyses. Significant differences in the abundance of 238 proteins around the lactation cycle were identified using the DIA approach. Developmental changes of the whey proteome corresponding to lactation stage were revealed: plasminogen, α-2-macroglobulin, and fibronectin levels decreased from d 1 to 240, whereas polymeric immunoglobulin receptor, nucleobindin 2, fatty acid-binding protein 3, and lactoperoxidase increased from d 1 to 240. Protein-protein interaction analysis showed that fibronectin with a higher degree of connectivity is a central node. The findings are of great significance to better understanding the potential role of specific proteins and the mechanism of protein biosynthesis or intercellular transport in the mammary glands related to the physiological changes of dairy goats.

The samples were collected from the Qingdao Aote Goat Farm of China. Fifteen healthy dairy goats with second parity and without clinical diseases were selected. The diet ingredients and components of goats during the lactation stages are listed in Supplemental Table S1 (https://doi.org/10.17632/n8n4s2sv9r.3;
Sun, 2022
Whey preteomics 2021.1.10. Mendeley Data, V3.
https://doi.org/10.17632/n8n4s2sv9r.3
Date: 2022
). At 6 stages (1, 3, 30, 90, 150, and 240 d), 50 mL of milk was collected from the 15 goats. Eighty-six samples were obtained in total; samples from 4 goats were not collected due to insufficient milk on d 240. The dairy goats were housed freely, fed TMR diets twice daily at 0700 and 1630 h for ad libitum intake, and milked twice daily at 0600 and 1800 h. Samples on d 1 and 3 were obtained via manual milking, while the remaining samples were obtained via milking from both udders with a machine. After collection, the samples were stored at −20°C, transferred to the laboratory, and stored at −80°C. Only routine animal procedures (milking) were conducted in this study, so this analysis did not require approval by an Institutional Animal Care and Use Committee or Institutional Review Board.

After the milk samples were thawed at 4°C, 5 individual milk samples from each lactation stage were combined into 1 fraction. This resulted in 3 biological replicates for each lactation stage and 18 pooled samples for the 6-lactation time point. The whole milk was first centrifuged at 4,000 × g and 4°C for 30 min. The top layer of milk fat was removed, and the liquid phase of skim milk was collected. The skim milk was then ultracentrifuged at 100,000 × g for 60 min at 4°C to separate the casein precipitates and the whey protein supernatant using the model L-80XP (Beckman Coulter). The supernatant containing whey proteins was collected and stored at −80°C. Protein concentrations in milk whey were determined using a BCA assay in which bovine serum albumin served as a standard.

Thirty micrograms of whey proteins from each lactation time point were heated in 50°C water for 30 min with 30 mM Tris/HCl and 100 mM dithiothreitol. After the samples were cooled, they were mixed with 200 μL of UT buffer (8 M urea and 100 mM Tris-HCl, pH 8.5), transferred into a filter tube (Sartorius), and centrifuged at 14,000 × g and 25°C for 25 min. Subsequently, the samples were washed with UT buffer, mixed with 100 μL of 50 mM iodoacetamide solution, and then incubated for 45 min in the dark at 25°C. After incubation, samples were centrifuged and washed. Finally, the samples were mixed with 100 μL of trypsin buffer (1 μg sequencing grade trypsin in 50 mM NH4HCO3) and then incubated for 16 to 18 h at 37°C. Formic acid (FA) was added to stop the reaction. The filter was transferred to a new tube, centrifuged at 14,000 × g for 15 min, and washed twice with 50 mM NH4HCO3. The eluates containing the peptides were pooled and desalted using a C18 column (60108–303, Thermo Fisher Scientific). The samples were dried in a speed vacuum and stored at −80°C.

The DDA raw files were analyzed using MaxQuant software (version 2.0.3.0) to search against the database downloaded from UniProt (46,754 entries of Bos taurus; 35,479 entries of Capra hircus; downloaded in December 2020). The relevant parameters were set as follows: the digestion mode was set to trypsin/P specificity, maximum missed cleavages at 2, fixed carbamidomethyl modification of cysteine, and variable modifications of N-terminal acetylation and methionine oxidation. Protein and peptide identifications were achieved at a false discovery rate and Peptide-Spectrum matching of 0.01. The conditions for matching between runs were set as 0.7 match time window, 0.05 ion mobility, 20 alignment time windows, and 1 alignment ion mobility. The identified proteins were quantified based on the abundance of razor and unique peptides using a label-free quantitation (LFQ) workflow. The DIA raw files were also searched against the downloaded database using the MaxQuant software, as mentioned above. In addition, the spectral library was established using DDA, and the other parameter settings were the same as those applied in the DDA procedure.

The whey proteins with at least 2 identified peptides and all 3 runs of each studied group were selected and imported into the Perseus software (www.maxquant.org/perseus/). Hierarchical clustering, volcano plots, principal component analysis (PCA), and statistical analysis of the quantified proteins among the studied groups were performed. Quantified proteins among the studied groups were analyzed using ANOVA with Benjamini-Hochberg false discovery rate. Differentially abundant proteins were determined according to |fold-change| ≥2 and q-value <0.05. Gene Ontology (GO) enrichment and the Kyoto Encyclopedia of Gene and Genome (KEGG) pathway of these different proteins were analyzed using DAVID Bioinformatics Resources 6.8 software (david.ncifcrf.gov/summary.jsp), in which P-value <0.05 was considered to be significantly enriched. The protein-protein interactions (PPI) of differentially abundant proteins were predicted using STRING software (string-db.org) with 0.70 confidence and visualized using Cytoscape software.

For the DIA data, 238 proteins were considerably different throughout the lactation stages according to q-value and fold-change (Supplemental Table S4; https://doi.org/10.17632/n8n4s2sv9r.3;
Sun, 2022
Whey preteomics 2021.1.10. Mendeley Data, V3.
https://doi.org/10.17632/n8n4s2sv9r.3
Date: 2022
). Several proteins, including IgG, lipopolysaccharide-binding protein (LBP), fibronectin, serotransferrin, melanotransferrin, inter-α-trypsin inhibitor, α-1-antiproteinase, prothrombin, α-2 macroglobulin, complement C3, and growth/differentiation factor 8 were significantly decreased from d 1 to 240. Lipoprotein lipase, fatty acid-binding protein 3 (FABP3), lactoperoxidase, polymeric immunoglobulin receptor (PIGR), osteopontin, and endoplasmin were significantly increased from d 1 to 240. In addition, lactoferrin, actin-depolymerizing factor, and cysteine-rich secretory protein 3 levels decreased from d 1 to 30 and then increased until d 240.
To visualize the changes in whey proteins during the lactation stages, volcano plots comparing d 1 and d 3, 30, 90, 150, and 240 are shown in Figure 2 and Supplemental Table S5 (https://doi.org/10.17632/n8n4s2sv9r.3;
Sun, 2022
Whey preteomics 2021.1.10. Mendeley Data, V3.
https://doi.org/10.17632/n8n4s2sv9r.3
Date: 2022
). Compared with the d 1 sample, significantly altered proteins increased from d 3 to d 90 and remained similar to those at d 240. Changes in the components of whey protein profiles in goat milk increased from d 1 to 90 during the lactation stage. Of these, we found that the levels of lactoperoxidase, syndecan, and FABP3 were significantly increased, whereas those of complement C3, complement subcomponent C1r, α-2 macroglobulin, matrix Gla protein, and IgG were significantly decreased from d 1 to 240. In addition, the changes in the abundance of most whey proteins in goat milk throughout the lactation stages from the DDA data were consistent with those from the DIA data. Several of the differentially abundant proteins from the studied groups, such as apolipoprotein A-IV, lactoperoxidase, FABP3, fibrinogen, complement C3, and vitamin D-binding protein, are shown in Figures 3a and 3b.

Characterization of the Identified Whey Proteins

Related proteins corresponding to specific stages of lactation were revealed using a DIA-based proteomics approach that was confirmed using a DDA quantitative proteomics strategy. The proteins IgG, vitamin D-binding protein, LBP, and fibronectin decreased from d 1 to 240, whereas lactoperoxidase, PIGR, calgranulin-A, and calgranulin-B increased from d 1 to 240. Fibronectin with a higher degree of connectivity was considered a central node. These findings provide new insights into the whey proteome profile and temporary changes in whey proteins throughout the lactation cycle, which may contribute to understanding the intrinsic physiological functions of goats.