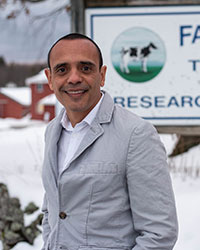 André Brito is an associate professor of Dairy Cattle Nutrition and Management in the Department of Agriculture, Nutrition, and Food systems at the University of New Hampshire. He grew up in northeastern Brazil (Bahia state) and received a BS in veterinary medicine (1996) and an MS in animal nutrition (1999) from the Federal University of Minas Gerais in Belo Horizonte, Brazil. Brito moved to the United States in 1999 to pursue a PhD in dairy science at the University of Wisconsin, where his research focused on nitrogen utilization in dairy cows. After graduation in 2004, he returned to Brazil to join the Federal University of Viçosa as a postdoctoral fellow. In 2006, Brito accepted a second postdoctoral position at the Dairy and Swine Research and Development Centre in Sherbrooke, QC, Canada, where he spent 3.5 years. Brito was hired by the University of New Hampshire in 2009 as an assistant professor and was promoted to associate professor in 2015. His lab focuses on improving nutrient use efficiency in lactating dairy cows under conventional and organic management through applied research ranging from amino acids nutrition to forage sources to grazing supplementation strategies.