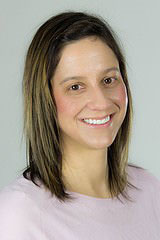 Laura Hernandez is an associate professor in the Dairy Science Department at the University of Wisconsin-Madison and began this position in 2011. Her research has focused on how serotonin controls the mammary gland and various aspects of lactation and how this pertains to maternal health in models of dairy cattle, mice, and humans. Hernandez combines basic research from the cell to whole-animal level in a variety of mammalian species to broaden the focus on the importance of the mammary gland and its contributions to and regulation of a successful lactation in dairy cattle. She uses mice and dairy cows to understand how the mammary gland can control maternal metabolism to support the synthesis of milk and how to optimize maternal outcomes. The outcomes of her novel research are aimed at demonstrating the presence of factors (specifically serotonin) produced within the mammary gland that can control the animal’s physiology while lactating, particularly during the transition period when cows are the most metabolically and physiologically challenged. She specifically focuses on the interaction of serotonin and calcium metabolism during the transition period and has a patent for the use of the precursor for serotonin to manipulate calcium metabolism during the peripartum period. She also focuses on the interactions of using SSRI during pregnancy and lactation on long-term maternal health outcomes. Her research has determined that serotonin is an important regulator of mammary gland and maternal calcium homeostasis during lactation.